“Envy is the unpleasant feeling of wanting what another person has and feeling bad that you don’t have it.” ~ Betsy Cohen, The Snow White Syndrome

“Enjoy your own life without comparing it with that of another.” ~ Marquis de Condorcet

I’m a 4 on the Enneagram, which means, among other things, that I have an alarming propensity for envy, and for comparing myself – frequently negatively – to others.

I’ve done this since I was very small, but I never realized how much until I got Enneagram “typed.”

I first learned about the Enneagram around the time of my first wedding anniversary (back when I was a child bride). A friend of a friend, who was studying at the Institute for Transpersonal Psychology, hooked me up with a classmate of hers who was looking for willing clients to do free Enneagram typing.

The Enneagram lady asked me a zillion questions, but the only one I actually remember was whether I experienced a lot of envy.

Though there was the fact that my best friend was about to get married, and she was getting to have a dress, and a wedding, and all with the support of a big, warm, loving, welcoming family of in-laws. My in-laws, on the other hand, were thoroughly dysfunctional, and had been less than enthusiastic about my wedding.

Tragically, we each had terminally ill mothers-in-law during our wedding planning months, yet her in-laws were enthusiastic and supportive, grateful for an opportunity to celebrate something joyful during a tragic and challenging time, whereas my in-laws were appalled at the very idea that anyone would possibly celebrate anything when such a horrible tragedy was happening.

But envy? Why, no, I didn’t think it affected me much at all.

Though I guess I did sort of compare myself to other people, and frequently wish I had their life, rather than my own.

And come to think of it, I did often wonder if maybe I should have followed that path (pick one, any one), rather than the one I was currently on.

Are you starting to get the picture?

That 90-minute Enneagram typing session actually had a big impact on my life, because it pointed out to me a truth about myself I’d been afraid to look at before.

Awareness is the first step toward change, and being aware of exactly how much envy affected my life helped me to start to look for some techniques for dealing with it.

When I mentioned the Enneagram experience to the wonderful therapist I was seeing at the time, she loaned me a book called The Snow White Syndrome, by Betsy Cohen, who offered a positive spin on the emotion. Of course envy itself feels bad, but as with most things, it’s not the thing itself, but your reaction to the thing that makes it ultimately positive or negative.

When you notice yourself experiencing envy, you have a choice. You can let it consume you. You can plot to do evil things to the person you envy. You can just decide you’re a loser. Or, you can figure out exactly what it is that you want that the other person has, and how you can create that for yourself.

Not steal it, but create it for yourself.

The key is to pinpoint exactly what it is you’re envying.

For example, I experienced an intense burst of envy the other day when a fellow artist and colleague/competitor got some well-deserved publicity for his work on a blog I admire. My mind started racing with reasons why he was so much better than I am:

– his business model is clearer

– his design is so clean

– everything about his work and business just seems so much more together than mine!

The profile of my compatriot seemed to create an unlimited number of things to beat myself up about.

Why wasn’t I more on top of things?

Why wasn’t I coming up with and going after new ideas, and executing them well, the way he was?

What was wrong with me?

Of course, the main thing that was wrong with me was comparing my insides to his outsides, (which I could even sort of tell – yay me!), but there was something else here for me to sink my teeth into, and it was this:

Here I was feeling envious, yet the fact is that his business model is not actually the business model I want for myself anymore! It was for awhile, but my Bliss has evolved, and that business model no longer fits who I am and how I want my life to be.

So what was I doing stewing in all this envy?

The envy wasn’t going away, so it was clearly time to think some more.

And I realized that what I envied was not his business model, but his success in going after his goals, and his apparent contentedness in his path.

Here I was, in the process of redefining my goals for myself and my business – redefining my job title, for goodness sake – so the fact that this other person had a clear goal, and seemed very satisfied with his choices, that was what I envied!

Sure, I envied the public attention (hey, I’m a performer, I love the limelight!), but in my experience public attention comes when you’re on the right path. At least that’s how it’s always happened in my life. From the Universe’s perspective, it wouldn’t really make sense for me to get profiled about my existing business model, because that’s not the Empire I’m most working on growing!

So I focused my attention on the things I really do want to work on:

– creating the life I want

– writing for my blogs

– making art that I want to make

– helping and inspiring other people create the lives that they want

And it turns out there are countless people out there doing their version of just these things, and achieving great gobs of success (be it audience, acclaim, money, whatever).

So again: envy! And that dratted Comparison Trap. You know the one:

She has such an awesome voice!

He has such a clear direction!

She’s figured out how to create value doing what she loves!

They’re all doing something totally amazing and whatever I do just pales by comparison!

I  know enough to know that when I get to this place, it’s time to put a stop to the madness.

Yes, all the people I’m comparing myself to are amazing and doing things I greatly admire in ways that I’ll never be able to do… because I am not them!

Time to draw on inspiration wherever I can find it, before I get sucked permanently down into the black hole of suckiness. It was at this point that I created the piece above. The process of thinking up the statement, conceptualizing the posture of my brush-stroke Irresistible Woman, painting her, calligraphing the words – these very acts put me in touch with my personal power, and the fact that yes, I do have something to say, I do have something to offer!

I envisioned some other woman seeing the art and pulling herself out of the Comparison Trap, and suddenly all the successes of my heroes retreated to the realm of “wonderful and cool, but ultimately nothing to do with me.“

Because that’s Benign Reality: just because other people are awesome and amazing does not mean that you are not!

Modern dance pioneer Martha Graham said it better than anyone I know:

“There is a vitality, a life force, an energy, a quickening that is translated through you into action, and because there is only one of you in all of time, this expression is unique. And if you block it, it will never exist through any other medium and it will be lost. The world will not have it. It is not your business to determine how good it is nor how valuable nor how it compares with other expressions. It is your business to keep it yours clearly and directly, to keep the channel open. You do not even have to believe in yourself or your work. You have to keep yourself open and aware to the urges that motivate you. Keep the channel open. … No artist is pleased. [There is] no satisfaction whatever at any time. There is only a queer divine dissatisfaction, a blessed unrest that keeps us marching and makes us more alive than the others.”

(from The Life and Work of Martha Graham)

Did you catch that?

It is not your business to determine how good it is, nor how it compares with other expressions.

Your job is simply to keep the channel open.

You do not even have to believe in yourself or your work.

Just keep at it.

I have no doubt my struggle with envy and the Comparison Trap will plague me in one way or another for the rest of my life. But that’s okay, because when you understand your adversary, you can better arm yourself against it!

Anything and everything that will help me remember Benign Reality: that I am really and truly okay. That my value lies in my uniqueness.

This armor may consist of:

– A team (squadron? army? battalion?) of people who love me and believe in me, even when I can’t believe in myself. (Anyone who doesn’t qualify can – and should – be weeded from my friendship garden with impunity.)

– Teachers and sages who remind me of Benign Reality, whether in person or in print.

– Mantras/affirmations/validations – whatever you want to call them. Combinations of words that remind me of my worth.

– Inspirational art/music/poetry to buoy me up. (The original artwork of “A woman in love with her life is absolutely irresistible” [see below] sits on a shelf just above my computer monitor.)

There’s a reason we surround ourselves with inspiring messages: they work!

To those of you who never get ensnared by the Comparison Trap, good for you! I envy you. (How’s that for irony?)

Alas, my lot is different from yours. I may never completely escape the Comparison Trap, but with my armor I’ll hopefully manage to stave it off enough to keep the channel open. And perhaps in wrestling with it I’ll be able to make a small difference for someone else who fights the same demons.

I have to admit that would make me feel a helluva lot more pleased, even in my “queer divine dissatisfaction.” 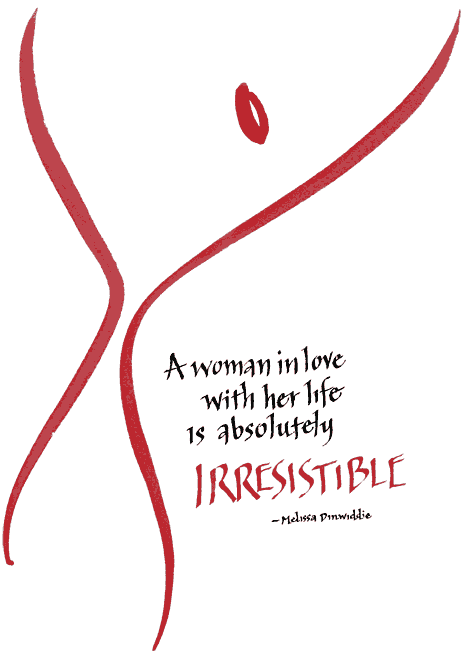 And you? Do you sometimes get stuck in the Comparison Trap? What’s your armor?