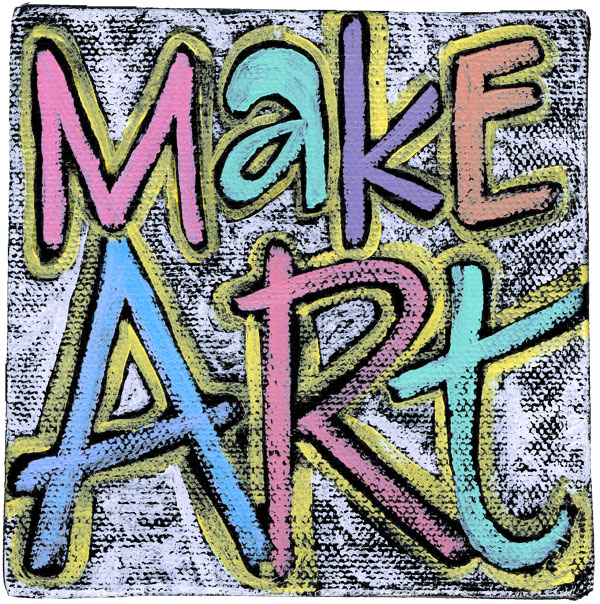 If you haven’t guessed by now, your intrepid correspondent can be a bit… obsessive sometimes.

To wit: just as soon as I make a public announcement that I’m not yet ready to commit to making a new painting every day, I go ahead and form the private intention to do just that.

Sometimes I drive even myself crazy.

But the truth is, way back in May I had my first (and so far only) life coaching session with Susan, in exchange for designing and installing for her a new WordPress website (not yet live at the time of this writing; if you click through that link, that is not the site I designed — check back in a few weeks). In that life coaching session I got very clear that I really, really want to be making art every day.

Did you catch that? Every day.

Because the thing is, when I’m actively creating, when I actually make art, the whole rest of the day goes better. I feel like I’m living in alignment with my life’s purpose, and I’m just plain happier.

My Irresistible Yogini line of artwork sprang from that life coaching session, which was awesome. And for a number of weeks I was making art every day. It was great. I was happier, and the whole rest of my day did (for the most part) go better.

But gradually my discipline dwindled, and I stopped making art every day.

Why? What would make me stop making art, when that was the exact goal I was going for?

Honestly, I was kind of stumped, and felt pretty badly about not following through.

Recently, though, I figured something out. I realized that although I love my Irresistible Yogini and I do want to fill out the line, after the first few days, working on that line didn’t actually satisfy the need that I was hoping to fill.

I wanted to play. To experiment. To mess around with color, get my hands dirty, and not worry about rules.

Making Irresistible Yogini is a lot more about designing than experimenting. It’s fun figuring out how to turn simple brush strokes into a female form in a yoga posture, but after the first few minutes it doesn’t feel like playing anymore.

Instead, it’s redoing the same brush strokes 57 times until I get a version I’m reasonably happy with.

Then it’s calligraphing the words over and over until I get a version of that that I’m reasonably happy with.

Then it’s scanning and color correcting and messing around in Photoshop, which, while it can be fun, is 180 degrees from my original goal of messing around and “finger-painting.”

Which brings me to my four tips:

Tip 1: When you set a goal for yourself, make sure you’re very clear on the underlying reasons why you want this thing

My initial goal, to make art every day, was not really clear enough. I didn’t really just want to add a new line of art to my website (though of course that’s always nice). I didn’t want a new work assignment. What I really wanted was to use my hands to be in the creative zone.

As a result, my real goal would maybe have been better stated as:

To mess around with paint every day

To make a tiny painting every day in one hour or less, even if I don’t like it

Thankfully, I did finally get clear, and guess what — today is the third day in a row that I’ve made a painting! Knowing the real aim of my goal (to play, experiment, not feel bogged down by rules or expectations) helps keep me on track.

Getting clear on your goals is really important, but it’s just as important to do some processing to figure out why you want this particular goal, what you want to get out of it. If your goal isn’t in alignment with what you really want to get from it, you’ll run out of steam.

But if you’re clear that performing the tasks to get your goal will feed and nourish you, I’ll bet you that very little will be able to stop you.

and a related tip:

Tip 3: Make your goals right for you

I am most definitely not making a public commitment to make a completed painting every day. I’ve already made enough big public commitments recently, thank you very much. But I did go out and buy 15 tiny canvases and 3 tiny boards, and I do have a goal of painting every one of them by the time I put up my booth at the To Life! festival in Palo Alto, California on October 10.

That is achievable. And if I do end up making art every day, fantastic! That would make me phenomenally happy. But feeling like I have to because I’ve made a public commitment, while a great idea in theory, for me right now would feel too much like yet another client deadline I have to meet.

For me, the whole purpose of this make art more often goal is to provide an antidote to all the client deadlines that fill up so much of my life. Besides, it’s always better to under-promise and over-perform than vice-versa — to yourself just as much as to other people.

Now you may decide that making a public commitment is exactly what you need to light your creative fire. Great! Fantastic! The point is to do some thinking about what is really going to work for you.

Tip 4: Set things up so that your achievable goals are as easy as possible to achieve

For example, if you want to make a painting every day (even if you’re not publicly committing that you’re going to [ahem]), it’s probably a lot easier to make that happen if you canvasses are, say, 4 inches square, rather than, say, 12 feet by 18 feet.

It’s also a lot easier to scan a smaller piece to reproduce it as a print and/or post it online. A few months back I bought some canvasses with the intention of playing in a new medium, and I used those for my first two paintings. They happened to be 10″ square, which is not a large canvas in the scheme of things, but it is an inch and a half too wide to scan in one pass on my desktop scanner.

But no matter. I learned a wonderful lesson, and when I stocked up on more canvasses I kept them on the really small side. Clever monkey, aren’t I?

(It also doesn’t hurt that smaller canvasses cost a whole lot less, and use up a lot less paint, which costs money too. :))

It took me a few months, but I finally figured out what I really want from my make art every day goal. I figured out how to make my goal achievable and right for me, and I set things up so that my goal is as easy as possible to achieve.

In case you haven’t guessed, the image at the top of this post is today’s effort (see a side view below). I’ve got 17 more little canvasses and boards sitting on my drafting table. Watch for more little paintings to appear here (though not necessarily every day…)

And you? What’s one of your goals, and how can you tweak it to make it achievable, right for you, and as easy as possible to achieve? 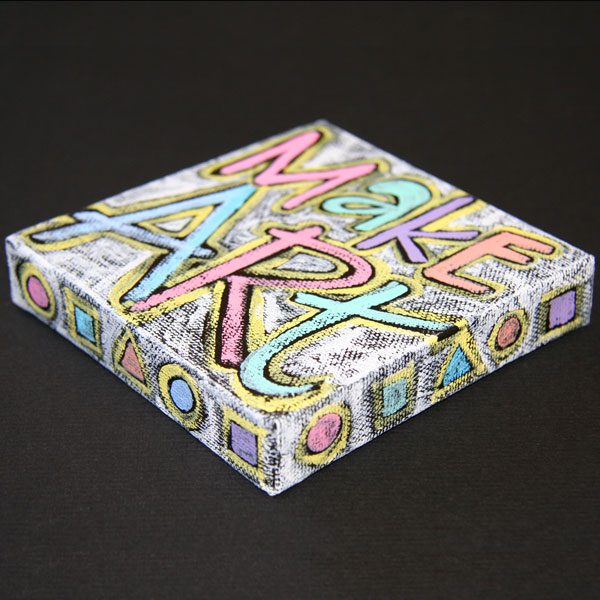