I’m back in the studio after leading my Spring Creative Sandbox Retreat, a 5-day creativity retreat I’ve been leading since 2013. (The next one is in September, and I have room for one more participant, if you’re interested.)

I spent most of the time at the retreat working on a visual bio, to introduce myself visually: 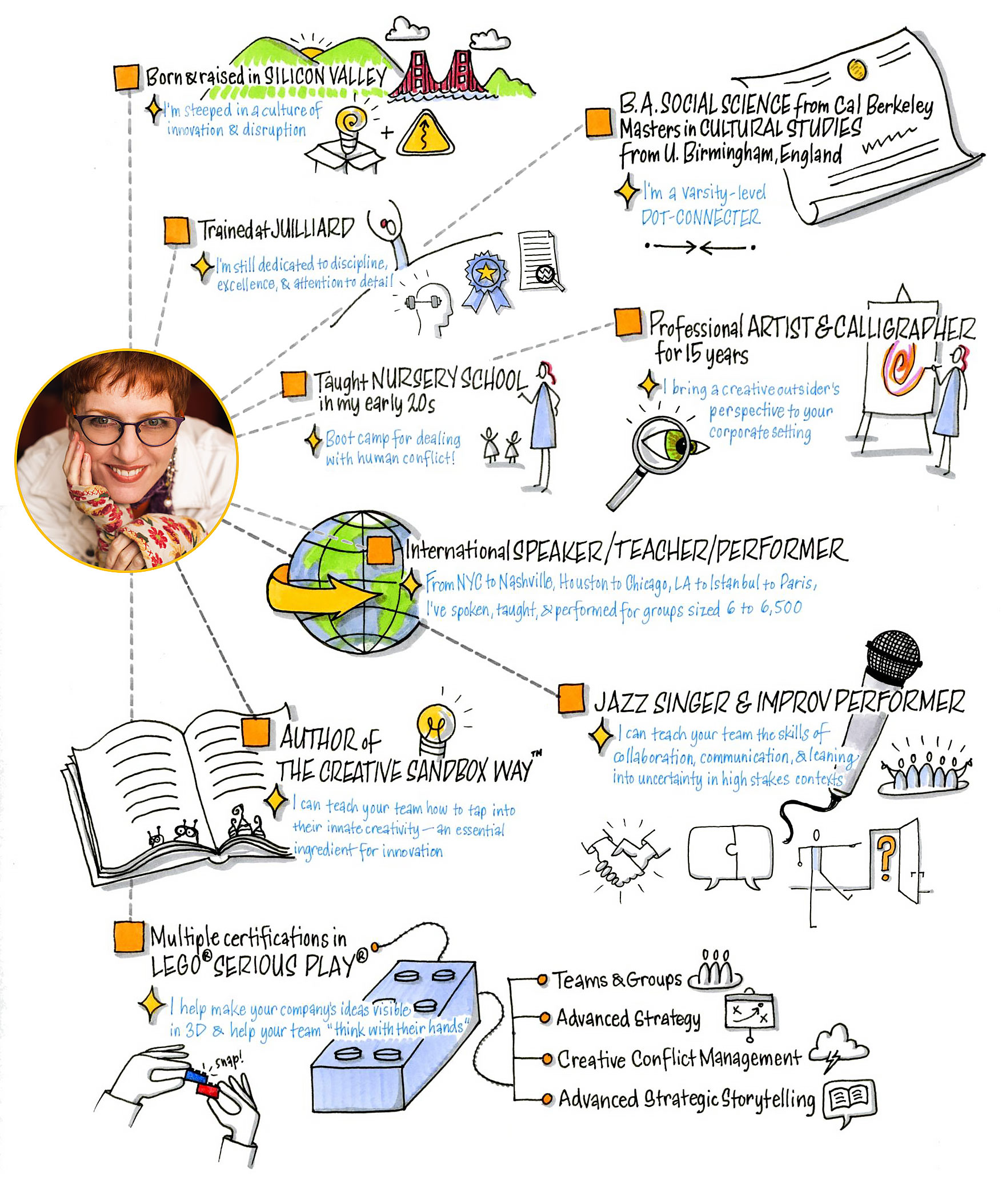 Then after I got home, I made a video version, because, why not?

I’m having so much fun creating these videos. And I had so much fun making this visual bio (even though it took four days!)

Some niggling part of me has been telling me, for the past three months, “Melissa, don’t forget to play in the creative sandbox…”

Because the sad truth is that I haven’t been.

It’s very easy to get a bit sloppy about boundaries.

And suddenly you turn around one day and realize that the sacred space you created for creative sandbox playtime has gotten very, very leaky boundaries, so much so that it’s pretty much ceased to exist…

I know this is a dangerous place to be in, because this is exactly what happened to me when I started my art and calligraphy business back in the 90s.

That did not end well.

In fact, I spent a decade not making art for me — only making art for clients, convinced I “didn’t have time” to create anything unless it generated revenue (bull$#^&!), paralyzed by perfectionism — and ultimately, I burned the heck out.

I was utterly miserable.

Yep, I learned my lesson.

There absolutely positively HAS to be space in your life for creative sandbox playtime, completely devoid of commerce and obligation. And on a regular basis.

(That’s Guidepost #4 from The Creative Sandbox Way™, in case you haven’t been paying attention.)

Er, well, even though I learned my lesson, I slipped. Again.

I had fallen completely off the wagon.

Well, not a problem. That’s happened before, and it will no doubt happen again.

The good news is, I noticed it!

Remember: the most important practice is simply getting back on the wagon! 🙂

With gentleness and self-compassion, of course.

Just get back on. Boom.

So today I did a doodle. And it felt good. 🙂

It was purely for my own enjoyment.

It didn’t matter if anyone else liked it. It didn’t even matter if I liked the outcome! (Hey, Guidepost #2 is “Think process, not product,” remember?)

All that mattered was that I was CREATING and HAVING FUN DOING IT.

It was maybe ten minutes of doodling. Who can’t afford ten minutes? I mean, really?

And I have to credit today’s getting back on the wagon to Diane Olive (thank you, Diane!), a new subscriber who sent the loveliest note after hearing my interview on Miriam Schulman’s Inspiration Place podcast.

I find the biggest challenge getting in the way of my creative life is guilt and fear of failure. I was raised to believe that I should get all my work done before doing anything fun or frivolous like art or writing. Decades later I’m still trying to get past that limiting belief, because, honestly, when is “all” the work ever done?! Also, I feel such crushing defeat and failure when I create art I’m not happy with, so I avoid art time to avoid that soul-sucking feeling. Ridiculous.

Thanks so much for your note. Oh, how I relate. I’ve learned that my days go better when I do my art FIRST, rather than waiting until everything else gets done, because as you say, everything else NEVER gets done!!!
Plus I’m so much happier when I make art! 🙂

And since the whole rest of my day goes better when I make art, it only makes sense to make art as early in the day as possible—ideally first thing! 🙂

Re. guilt: it’s not *true* guilt, because you are culpable of no wrongdoing. You haven’t actually harmed anyone. So the feeling is *faux* guilt. (Can you say “gremlins”? Yeah, they’re really good at trying to make you feel guilty for something for which there’s no reason to feel guilty!)

If you’ve harmed someone, guilt is a useful emotion, as it can compel you to right a wrong or change your ways. But if you haven’t actually harmed anyone, faux guilt doesn’t serve any useful purpose.

It can be interesting to ask, “why am I feeling guilty? Who have I harmed here? What is really going on?”

Re. fear of failure, we’ll, welcome to the club! That one never goes away! And the more successful you get, the bigger that fear gets, too!

The only way to deal with fear is to look it in the face and not let it stop you.

In fact, actually failing makes the fear of failure a lot less, because you realize it won’t kill you! 😉

Re. being less than happy with your art: welcome to that club, too! That’s part of being an artist!

Sometimes these days I’m actually delighted by what I make… eventually. But most of the time, most of my creations go through at least a good chunk of the process in which I can’t stand it, and am 100% convinced that not only is this thing godawful, but everything I’ve ever created utterly sucks, and I should probably have my artistic license revoked, and who the hell have I been kidding all these years??? My friends have all been lying to me, I’m a loser and a hack and a fraud, and I will never create anything decent as long as I live!

Thankfully, most of the time those gremlin-tinged thoughts usually pass. I persevere, grab the wheel of the bus, keep going, and climb out of the tunnel.

And as I said, sometimes what comes out is not only decent, but even delights me!

Not always, but sometimes. 🙂

More and more often the more regularly I allow myself to create crap. How’s that for irony?

I’ve found the practice worth it.

It felt so good to write all that. AND to create my doodle.

NONE of it had commerce or obligation attached. I did all of it because I FELT LIKE IT.

Ah. So nice to come back to the creative sandbox. 🙂

Oh, and then my friend Thomas (hi Thomas, if you’re reading!) sent me a message that my Instagram post inspired HIM to get back to HIS creative sandbox playtime.

We need each other.

Go play. It will do your soul good.

And you never know how it might just touch someone else.