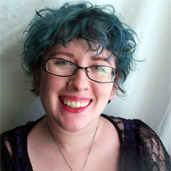 My subscribers are some of the most amazing, creative people I know. It is my great pleasure to introduce you to some of them via my Inspiring Subscriber Showcase series.

Today marks the first post in a new format for this series, in which I focus on one subscriber, rather than three or more, in a Q&A interview. Enjoy! (And be sure to check the bottom of this post for a way to win a ticket to the Day of Genius!)

Michelle Nickolaisen appeared on my radar about a year ago, when she emailed to see if she could contribute a guest post.

I explained that I wasn’t publishing guest posts on Living A Creative Life, but at the time I was deep in building mode as owner/curator for another project where I very much was accepting guest posts, and I was delighted to get six excellent posts from her right off the bat!

That started our association off on good footing, and it has only grown from there.

Last summer we got to know each other better as “cast members” in Sinclair‘s intensive month-long course, Action Studio, and in the beginning of June we had the pleasure of getting to hang out in person at Chris Guillebeau‘s World Domination Summit.

Since our initial “meeting,” Michelle has (among other things):

Plus, I have it on good authority that she’s got several juicy projects in the works for 2012…

Verdict: Michelle is what I wish I’d been at age 23 — an on-the-ball creative entrepreneur, making her mark on the world by making an impact!

The woman is a firecracker! 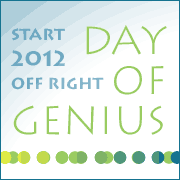 I was so impressed with her, in fact, that when she suggested joining forces to create a day-long virtual retreat together, to help people start the New Year off with enthusiasm, energy and a sure-fire action-plan for following through on their big dreams and goals, I jumped in with both feet.

Behold: the Day of Genius, our joint venture to get you rockin’ into 2012.

(See also this post and this one for some nifty, free worksheets to help you plan your Year of Genius, whether or not you can join us at the D of G. And check the bottom of this post for a stealth contest to win a ticket…)

It seemed only appropriate that I kick off this new interview series with Michelle, a woman who is creating up a storm. So without any further ado, I’m delighted to share my first Inspiring Subscriber interview!

How are you living a creative life? How are you following your evolving bliss right now?

I live a creative life by honoring the way I want to express myself — mostly through writing on various outlets. For a while, I was so focused on “doing” that I didn’t have enough time (whatever that means) for writing, and I could feel a shift emotionally when I started making more time for writing again. I’m following my evolving bliss right now by working on all of my projects that I want to do, instead of forcing myself to “focus” on one (which doesn’t really make any sense, since I’m a project manager — of course I would be happiest juggling multiple projects at once!).

What Resistances or “self-installed glass ceilings” have you faced that kept you from following your Bliss(es)?

The biggest thing that comes up for me is this idea of “It’s not going to work, so you might as well not even try.” I’m pretty good at recognizing that for the Resistance that it is now, but it used to dissuade me from doing a lot of things.

{Editor’s note: Yeah, you and a lot of folks, Michelle!}

What allowed you to get past the Resistance and onto your creative path? (Did you have a sudden revelation that things had to change? Did you experience a gradual shift?) What changes did you have to make?

When I think about it, I can’t really come up with a single “the heavens opened and the angels sang” sort of revelation. 😉 I don’t think most of us ever have one final boss-level battle with Resistance and then it goes away forever. Everything is cyclical — the same fears are going to rear their heads again at some point, you just have to make sure that you have the tools to get past them, you know?

The most useful thing for me is talking it out with someone close to me — for some reason, when you’re saying things out loud instead of in your head, it’s much easier to recognize patterns and silliness as what they are, instead of them just seeming normal. Even if you just talk out loud to yourself (preferably in a non-public venue!), it will probably help you suss things out.

What have you learned by honoring the call of your Bliss(es) that you’d especially like to share?

If you tend to naturally work in one mode, don’t try to make yourself work in another. It seems to me that the way common productivity “knowledge” goes is that one thing is really trendy for a while, and then something else is… but it doesn’t matter what’s trendy (whether in productivity or creativity or what), if it doesn’t work for you, then don’t try to force it!

What practices or rituals do you have to honor your creative spirit and keep your toe in the creative stream? (Tips, techniques, tools — whatever works for you. Anything goes.)

Tea is a ridiculously big thing for me. Most of my self-care rituals/practices are very vital to my creativity, too — it’s super hard for me to hear the call of my blisses/muses/creativity when I’m so tired I can’t think straight! So under that umbrella would fall things like tea every morning and throughout my day, doing yoga, bike riding, meditating. And getting plenty of sleep. 😉

Self-care is super important! As well as focusing on what is fulfilling to you & what lights you up — those are the things you’re going to be able to work hardest at.

In her own words: Michelle is a 23 year old writer + project wrangler extraordinaire, who lives in Austin Texas with her husband and two cats (named after Buffy characters, naturally!). You can find her on the web at Let’s Radiate, where she writes about productivity, organization, & systems for creative entrepreneurs, or at Bombchelle, where she writes about creativity, fulfillment, life, & work.

On offer: Check out Michelle’s Creative Moxie interviews pack — an inspiring little gem for just $12. (And this is not an affiliate link, btw. Though I did get a review copy of the interviews when they first came out.)

Now tell me, what resonated with you about Michelle’s interview? Share your responses below and on the LACL Facebook page.

PLUS: Win a ticket to the Day of Genius! Share on Facebook your insights to any of the blog posts here that reference the Day of Genius, along with your reasons for wanting to attend, AND share and/or tweet the post, and you’ll be entered to win a full-day pass. After the New Year, I and my panel of partial judges will pick one winner from among the commenters to join us for free. (Yes, commenting on/sharing of multiple posts will weigh heavily in your favor — we’re looking to add participants who really want to be there, so quality AND quantity will be taken into consideration.)