When I saw the web page, my first thought was, “Wow, I want to do that!”

Followed quickly by, “But I can’t… That’s not realistic…”

The page was promoting a one-day event, a “book launch party” for Michael Port’s forthcoming book, Steal the Show — an opportunity to spend a full day learning from one of the top public speakers (and more importantly, one of the best teachers of public speaking) in the country, if not the world.

This was beyond tempting for someone who recently determined that my Chief Initiative for the next six months is to get all my ducks in a row in order to successfully pitch myself as a public speaker.

Yowza — that is a scary thing to say out loud!

But there it is: I love speaking and performing, and it’s been a dream of mine for a long time to do more public speaking in order to bring my message of the importance of creative expression and play to new audiences via the stage.

So the opportunity to learn from Michael Port felt so juicy I could taste it.

And sheesh, the tickets are only $199! Plus they include over $1,600 in pretty amazing bonuses, which I know I’ll use.

But New York? For one day? I live in California, people….

Airfare… Hotels… Time away from work…

And so it felt for a day or two. Until…

Suddenly, during a meditation session, I realized I was looking at this opportunity through the lens of scarcity.

I was thinking only of what a trip like this would cost me, not what it could give me.

Just like that, I shifted things around and started looking through the lens of abundance.

What if, instead of treating this opportunity merely as an expense, both in time and money, I viewed it as a chance for more abundance in my life?

…but as a chance to live bigger, make connections, start sharing my message right now, and maybe even make some revenue in the process?

To get specific about it, what if I used this trip to create: 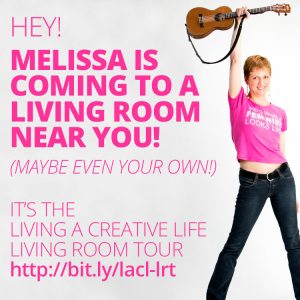 I reached out to the people near NYC who had already raised their hands as potential Living Room Tour hosts, and bang — within a day I landed not just one but two places to stay, transportation to/from the train, and one (possibly two) workshop and/or concert venues!

This is how it works.

Take a risk, ground a commitment, move one step forward and the world starts to open to receive you.

(There’s still room, if you’d like to join me! And no, I’m not an affiliate, but I am part of Michael’s “Show Team,” helping to promote the book, which gives me a behind-the-scenes view of the launch. Watch for a book review soon…)

AND I’ll be somewhere not too far from Manhattan for some kind of Living Room Tour event over the weekend (most likely Saturday, October 10, but nothing is cast in stone yet — stay tuned!), and possibly traveling down to Washington, DC for the following weekend.

So, an Invitation to YOU:

Or if you live in or near Washington, DC, and will be in town sometime between October 13 and 18…

Or if you live en route between the two, and will be in town sometime between October 13 and 16…

…and would like me to come to YOUR living room, either to teach a workshop and/or to present a house concert or a 45-minute Dinner and Song event to entertain your friends on a weeknight, shoot me an email and let’s talk!

Meanwhile, if you want to get updates on my East Coast Living Room Tour stop(s) in your inbox and you’re not already an Insider, just plop your info in the form below and I’ll keep you up to date!