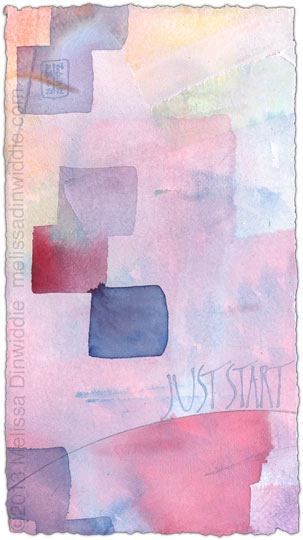 -Ben Affleck, in an interview with Terry Gross, on directing Argo, his first feature film

More often than not, when we’re looking longingly at a big, scary goal, we’re ready much sooner than we think we are.

One of the common features of any big goal that’s very close to your heart is that it feels like you don’t yet have what you need — are not yet the person you need to be — in order to follow it.

In fact, such a feeling of “unreadiness” is one of the hallmarks of a true calling.

It’s the very act of following the calling (or going after the big, scary goal) that will grow you into the person you need to be in order to follow it. (Click to tweet this!)

The simple awareness of this counter-intuitive fact can sometimes be enough to get you moving forward toward a goal.

Deep down, you’re ready — you’re as prepared as you need to be — but that readiness hasn’t risen to the surface. The timing isn’t right. The stars aren’t aligned.

Until one day, when they are.

Here are two recent examples from my own life.

For a couple of years now, I’ve had a powerful desire to offer creativity workshops and coaching groups locally. I love connecting with Creatives all over the world inside my Creative Ignition Club and the online programs I run, but I miss connecting live and in 3-D, as I did when I traveled around the country teaching calligraphy and book arts.

Video conferencing is great, but it’s not yet able to replace in-person!

I made a humongo dream come true last October with Playing Around Istanbul, the week-long workshop I co-taught in (wait for it) Istanbul, Turkey, and that experience stoked the flame of my desire to create more in-person opportunities locally.

When I came home, I set about organizing my Create & Incubate weekend retreat, set for May, which is making me giddy with excitement just thinking about.

Then Laureen, one of my club members, stepped forward and took charge of organizing a workshop for me to teach in Canada, where she lives — also in May. (It’s called Scribble, Splash, Stitch, and you can read all about it here.)

All of this was great, and definitely pushing my dreams forward. But I still wanted to lead some kind of ongoing group locally. And somehow I just couldn’t figure out how to make that happen.

How do I even find people to tell about my groups? How do I get “butts in seats,” as they say?

It felt like a big, black void. Even when the answer had already been handed to me on a silver platter!

Wow! How brilliant! Use the internet to put the word out! I determined to try it.

Except that I didn’t do a thing. For seven months I thought, “Gosh, I really want to get some kind of in-person groups going…” and still I never even visited Meetup.com.

It was as if I had a blind spot preventing me from even seeing my opportunities.

So for seven months I did nothing.

I kept telling my best friend and MB how much I wanted this… but I couldn’t quite figure out the next step to make it happen.

Then suddenly, something shifted. I’m not sure what tilted the balance from “not ready” to “ready,” but this past week I finally went up to Meetup.com and created a Living A Creative Live Meetup group.

A day or two later my group was approved, went live, and was emailed out to a bunch of Meetup members.

And within 24 hours my group had 24 members!

Yowza! That lit a fire under me, and I quickly posted a 2-hour introductory workshop that, at last check, had seven people signed up to attend.

Members have emailed and DM’d me to thank me for starting this group. There’s clearly a hunger for creative community out there, and I’m really excited about where this might go!

I’m also scared as hell. Will I be able to maintain momentum? Will I like the people? Is what I’m offering going to be a fit for what they’re looking for?

No doubt all will be revealed in the fulness of time, and like every other new thing I’ve taken on, I’ll figure it out.

I’m not sure where these statistics are from, but supposedly 81% of people have a goal of writing a book. I’m one of that 81%, and a year ago, in January 2012, I decided it was time to actually do it.

The idea scared the hell out of me, and my gremlins had a field day. I was so riddled with self-doubt that I took to calling my goal a “book-like object,” because calling it a book brought my “Who do you think you ARE?” gremlins out of the woodwork.

(Gremlins don’t really know what book-like objects are, so they don’t get so triggered by them.)

Anyway, I did, indeed, do a fair amount of writing last year, mostly “shitty first draft/discovery draft” stuff, to help me (hopefully) figure out what in the heck this book or memoir or whatever was going to be.

I knew that my feeling of being inadequately prepared was simply a feeling, and that I’d learn what I needed to know and become who I needed to be through the process of doing this thing. But still, apparently I wasn’t quite ready, because suddenly I found myself at the end of 2012, no closer to my goal than I’d been at the beginning.

That brought up the specter of yet another year going by, then three, ten… a lifetime of dreaming but never doing.

So I put my foot down.

I knew I’d have a much higher chance of reaching my goal if I didn’t go it alone, so after discussing it with MB, I hired a writing coach to help me figure out the structure of this book (which started out as memoir, and has since morphed into sort of a manual for living a big, bold, creative life), and stay on track.

And here I am, publicly proclaiming that yes, I am writing a book (not even a book-like object, you’ll notice!)

I’m even inviting my subscribers to contribute, asking them to share their biggest challenges when it comes to living the big, bold, creative life of their dreams. (Sign up here to subscribe to my insiders newsletter, if you’d like to participate in the “Help contribute to my book” survey.)

Apparently the stars needed another year to fully align themselves. Maybe that year of messy, muddy, unsatisfying flailing was exactly what I needed in order for that alignment to happen. But now the timing is right, and I’m leaping forward.

Note: Aligned Stars Do Not Stop the Fear

It should be said that my readiness to take the leap into leading local groups, and proclaiming that I’m writing a book bears no relationship to the presence or absence of fear.

I’m still scared. I don’t feel nearly as prepared or credentialed as my gremlins assure me I ought to be.

I’m filled with doubts. Can I pull this off? What if I fail miserably? What if I’m mediocre? What if all I get when I put my stuff out in the world is the sound of crickets chirping?

These and a zillion other scary questions have me quaking in my boots. But as Nancy Sinatra sang, “these boots are made for walkin’.” And in order to learn to walk, you’ve got to walk.

The funniest part is that now that I’ve finally taken the leap to get started, it feels like a much smaller jump than I’d been making it out to be.

Isn’t that always the way?