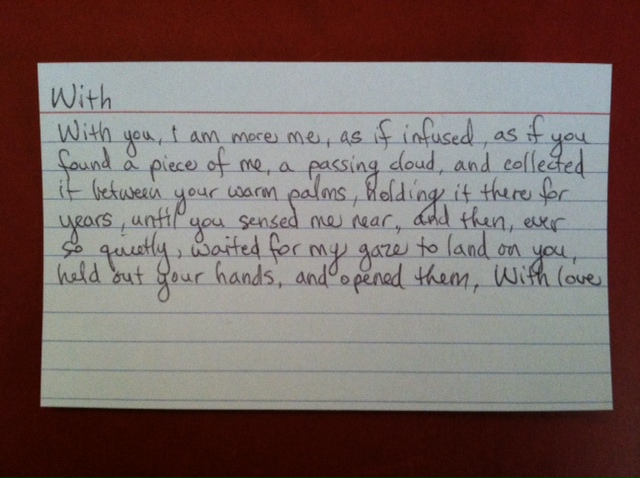 as if you found a piece of me, a

and collected it between your warm palms

hiding it there for years,

until you sensed me near,

waited for my gaze to land on you,

held out your hands, 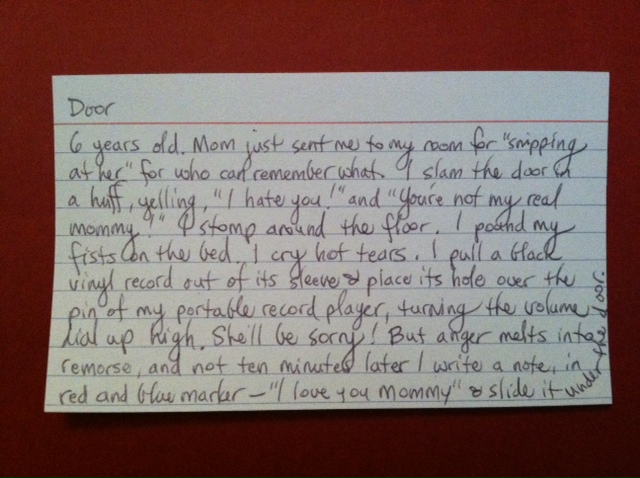 6 years old. Mom just sent me to my room for “snipping at her” for who can remember what. I slam the door in a huff, yelling, “I hate you!” and “You’re not my mommy!” I stomp around he floor. I pound my fists onto the bed. I cry hot tears. I pull a black vinyl record out of its sleeve & place its hole over the pin of my portable record player, turning the dial up high. She’ll be sorry!

But anger melts into remorse, and not ten minutes later I write a note, in red and blue marker — “I love you mommy” — & slide it under the door. 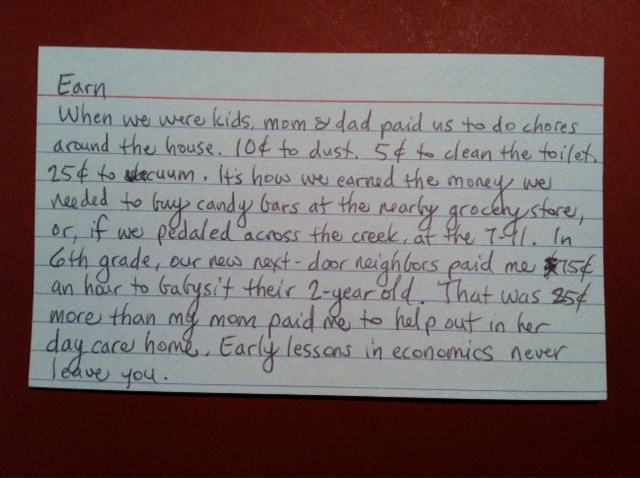 When we were kids, mom & dad paid us to do chores around the house. 10¢ to dust. 5¢ to clean the toilet. 25¢ to vacuum. It’s how we earned the money we needed to buy candy bars at the nearby grocery store, or, if we pedaled across the creek, at the 7-11.

In 6th grade, our new next-door neighbors paid me 75¢ an hour to babysit their 2-year old. That was 25¢ more than my mom paid me to help out in her day care home. 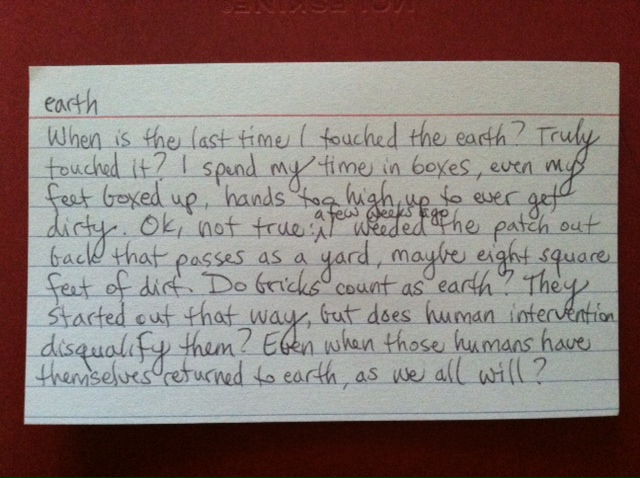 When is the last time I touched the earth? Truly touched it? I spend my time in boxes, even my feet boxed up, hands too high up to ever get dirty.

Ok, not true: a few weeks ago I weeded the patch out back that passes as a yard, maybe eight square feet of dirt.

Do bricks count as earth? They started out that way, but does human intervention disqualify them?

Even when those humans have themselves returned to earth, as we all will? 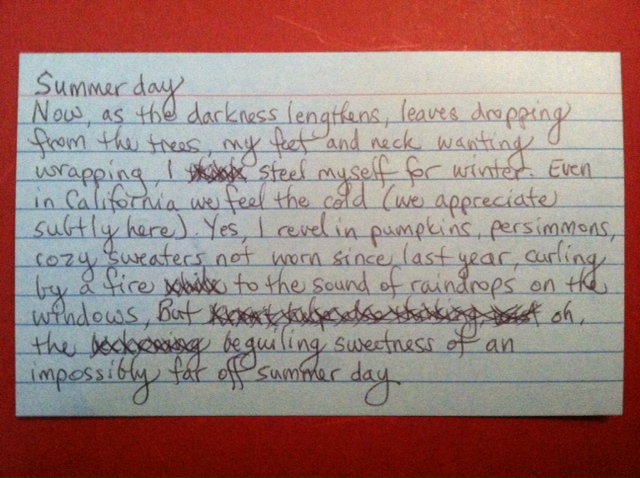 Now, as the darkness lengthens, leaves dropping from the trees, my feet and neck wanting wrapping, I steel myself for winter. Even in California we feel the cold (we appreciate subtlety here). Yes, I revel in pumpkins, persimmons, cozy sweaters not worn since last year, curling by a fire to the sound of raindrops on windows. But oh, the beguiling sweetness of an impossibly far off summer day. 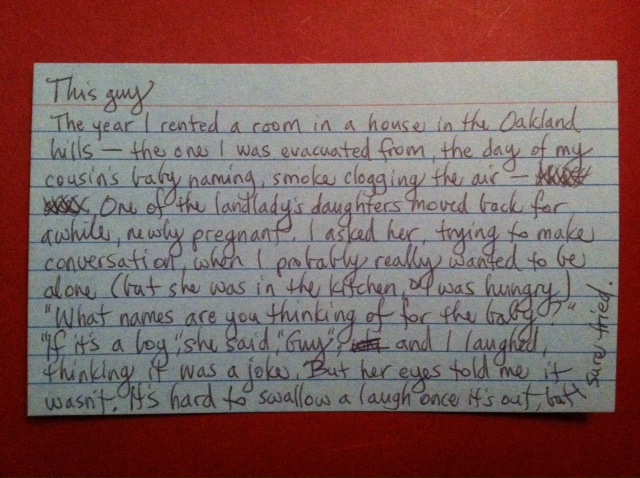 The year I rented a room in the Oakland hills — the one I was evacuated from, the day of my cousin’s baby naming, smoke clogging the air — one of the landlady’s daughters moved back for awhile, newly pregnant.

I asked her, trying to make conversation, when I probably really wanted to be alone (but she was in the kitchen, & I was hungry), “What names are you thinking of for the baby?”

But her eyes told me it wasn’t.

It’s hard to swallow a laugh once it’s out, but I sure tried. 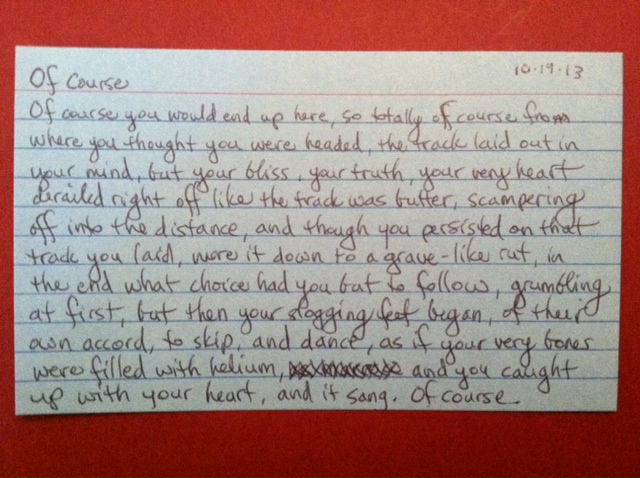 Of course you would end up here, so totally off course from where you thought you were headed, the track laid out in your mind, but your bliss, your truth, your very heart derailed right off like the track was butter, scampering off into the distance, and though you persisted on that track you laid, wore it down to a grave-like rut, in the end what choice had you but to follow, grumbling at first, but then your slogging feet began, of their own accord, to skip, and dance, as if your very bones were filled with helium, and you caught up with your heart, and it sang. Of course.

This morning I opened up to a random page in 1000 Songwriting Ideas, by Lisa Aschmann, closed my eyes, and stabbed my capped ballpoint pen down on the page. The word my pen landed on was “course,” preceded by “of.” From there I was off and running.

I can’t say it’s unadulterated stream of consciousness, because I’m hyper-aware of the editor at work (the crossed out section at the bottom is the only visible prof, but rest assured the editor was working throughout, mostly critically).

This 3×5 practice is an interesting contradiction: on the one hand, I aim to let the words flow, unrestricted; on the other hand, I want to like what I write. I inevitably end up failing massively at one or the other, and often both, but that’s part of the point. This practice is so much about embracing imperfection, and as a self-declared imperfectionist (ie, a recovering perfectionist), I can use as much practice at that as I can get. 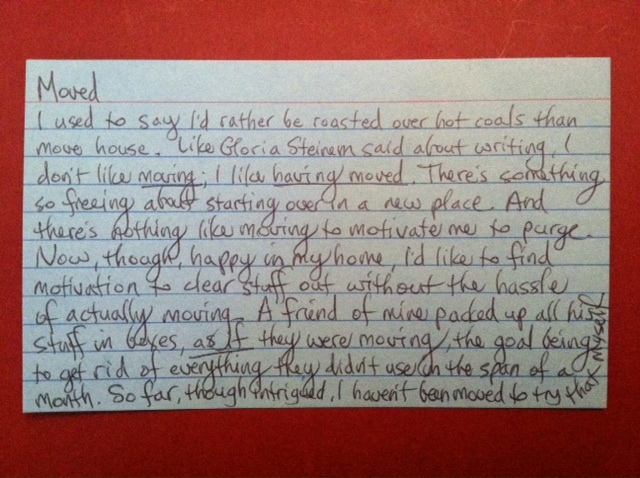 I used to say I’d rather be roasted over hot coals than move house.

And there’s nothing like moving to motivate me to purge.

Now, though, happy in my home, I’d like to find motivation to clear stuff out without the hassle of actually moving.

A friend of mine packed up all his stuff in boxes, as if they were moving, the goal being to get rid of everything they didn’t use in the span of a month.

So far, though intrigued, I haven’t been moved to try that myself.

A big part of why I do this practice is to give myself permission to crank out crap, on the theory that:

A) If I crank out enough crap, once in awhile I’ll produce something good. (Creative Sandbox Rule #3: Think quantity, not quality.)

B) The way to get better at something is to do it, so presumably the ratio of crap to not-crap will improve with time. (Ditto.)

Today is one of those days when there’s nothing I particularly like about my efforts. This is okay! This is part of the practice!

At least this is what I’m telling myself.

I am choosing to trust the process.