Originally published on Valentine’s Day 2011, this is one of my all-time favorites. It felt appropriate to bring it out again for another Valentine’s Day, in which I’m celebrating over three years being married to Miracle Man, and seven years since the day he swooped back into my life after I passed him over for other guys twice (that’s a long story for another time). Enjoy! xo,Melissa

Today’s post is my contribution to the Love Sparks Blogging Festival, started by Jasmine Lamb. All across the blogosphere, participants are posting blogs about love, in response to Jasmine’s request.

I’m staying close to home on this one, sharing something rather personal. Something I’m a little shy about revealing. But it’s what’s been on my mind, and what popped into my head when I got Jasmine’s invitation, so it’s what I’m sharing today. Hope you enjoy it.

As far as I’m concerned, it’s a brilliant ploy by the flower, card and candy industries rather than any truly meaningful moment in annual time.

This year, though, is a little different.

One year ago I had just been unceremoniously END_OF_DOCUMENT_TOKEN_TO_BE_REPLACED 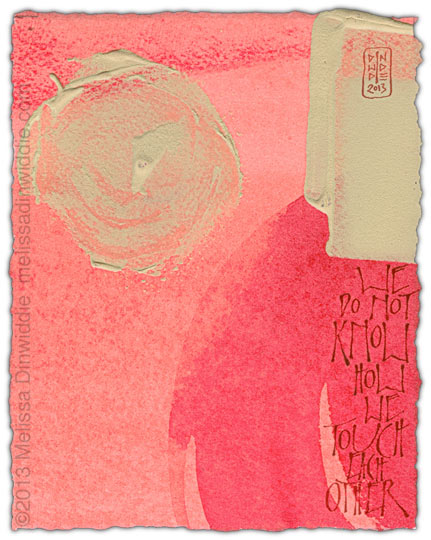 I’ve got two treats from the virtual chocolate box for you today.

First, some fun news: I’m presenting at a Pleasure Party!

22 teachers presenting on pleasure over a 7-day period, and it’s totally free. Click here to register, and to see my workshop, Creative Pleasure RULES: 3 Steps for Bringing More Creative Joy Into Your Life (which is live TODAY!)

(Those links, btw, are affiliate links. The Pleasure Party itself is free, but there will be an option to buy some pretty cool Pleasure Packages at the end of it, and if you do buy something, I’ll get a commission. It’s not going to buy me that Mercedes I have my eye on, or that round-the-world cruise, but it could send a few pennies my way, and I wanted to make sure you knew that. Transparency and all that.)

Ah, Valentine’s Day. People seem to either love it or hate it.

Until recently, I was definitely in the latter camp. A “holiday” with no real purpose (it seemed to me) other than to give the candy, card and flower vendors a reason to jack up their prices, I thought of Valentine’s Day less as a red letter day and more as National Make Single People Feel Bad Day. (Watch the video to the end for this reference to become clear.)

(I’ve since been strongly corrected by many married friends that it can also be National Make Married (or Coupled) People Feel Bad Day, too. Indeed.)

More recently, though, Valentine’s Day has come to take on added, and very positive meaning for me. Ironically enough, and very unintentionally, it has become my anniversary — not of a wedding, or even a first date, but the day that my sweetie and I count as the start of our “official” relationship.

I had planned to write a new post for today, a Valentine for my sweetie. However, in the spirit of upping my peacefulness quotient, and to make space for the surprise anniversary treat that he’s whisking me away to at 5pm today, I am instead just writing this short preamble as a way to introduce you to this post from “the chocolate box” (ie, the archives).

It remains one of my all-time favorites. It’s called

Click through, read, and enjoy. (And don’t forget to check out my Pleasure Party workshop too — it’s only 13 minutes long, and you’ll get all the other workshops too, all for free.)