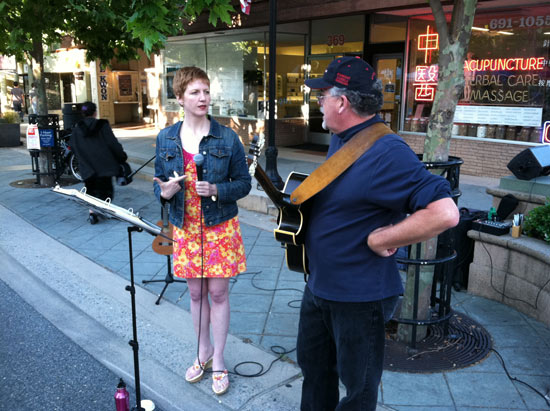 I was nervous when I stepped into yoga class on Friday. It was my first class in close to a month, thanks to an inflamed knee, followed by a week away at Jazz Camp West.

The last time I was in class, my knee was burning so much I had to stop half way through. You’d think that six months would be long enough to heal from surgery, but apparently not when drilling into bones and installing cadaver ligaments is involved.

I have to admit it had me pretty down, this oh-so-slow healing process.

But Friday’s yoga class surprised me. Not only did I make it through the entire class, but my knee actually seemed happier and more flexible – able to do more – than the last time I was in class!

The night before that yoga class, I had a singing gig with my friend Bill, at a summer street festival in my town.

I sang a handful of songs solo, with my ukulele, until Bill arrived with his guitar. Then we switched to jazz standards – Great American Songbook songs. The kind of stuff Ella and Carmen sang. The kind of stuff I woodshedded on for years… until I picked up the ukulele last summer and started gigging in earnest with my original material.

On Thursday evening, I realized I hadn’t sung an evening’s worth of standards since the corporate holiday party I sang for last December!

And not only that. Though I used to meet with my vocal coach every week, for the past two years I’ve been frugally abstaining from lessons.

Yet, to my surprise, despite forgotten lyrics here and there (thank god for charts and music stands!), my singing felt more fluid, comfortable and in control than it ever has.

How can it be that a long time away leads not to disintegration, but to improvement?

In truth, I’ve seen this happen before.

I started taking modern dance classes again almost twenty years after leaving the professional dance track I’d been on in my youth. My muscles had of course lost the strength and flexibility of my serious-dancer days, but what I lacked in strength I made up for in an expressiveness and lack of self-consciousness I would have killed for decades before.

After months and years of not practicing certain lettering styles, I pull out my calligraphy pens and find that not only does it not take long to get up to speed, but my lettering miraculously has a new-found freedom and fluidity.

Learning is not linear

This post is not intended as “permission” to avoid doing the creative thing you most want to do. If you’ve spent any time here at all you know that’s contrary to what I’m all about.

It is, however, intended to relieve a little pressure.

It turns out that learning is not the linear process we tend to think it is. Progress, particularly in a creative skill, or in physical healing, would not be graphed as a straight diagonal line.

Human beings are more complicated than that. It turns out that the process of integration is more mysterious and magical than we might have given it credit for.

Clearly, in those weeks, months or years away from whatever it was I was on a break from, my body and mind were still processing. The stew was still cooking somewhere on a back burner, even though I was consciously unaware of it.

All this is to say, do whatever you possibly can to do your creative thing. But if for some reason you truly cannot, don’t despair. All is not lost. You may be surprised at what is, in fact, gained, when you’re able to get back to it.

What about you? I know I’m not the only one who’s had this experience. Do you have a story of taking a break, and being surprised at the ways you had actually improved when you came back? Share in the comments below. Let’s inspire each other!