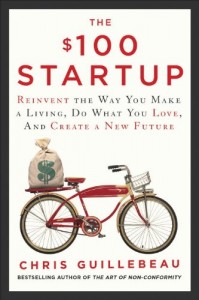 Today Chris Guillebeau’s second book, The $100 Startup, was released into the world.

Given how much press the man has (deservedly) received, it’s hard for me to imagine anyone might not have heard of Chris Guillebeau at this point, but then Chris also looms very large in my own world. He is, in fact, the role model who kicked off my journey toward living the fully creative life I really, really wanted, rather than the “not quite” life I’d been settling for.

With his writing, his blog The Art of Nonconformity, and his business model, Chris showed me that yes, people actually can make a living doing what they love. And they can change the world along the way.

Of course Chris is by no means the only person doing this, but he’s the first one who landed on my radar when I was ready to take notice. My life was forever changed as a result. I started this blog. I started looking for the sweet spot in my work, where what I love to do intersects with what other people are willing to pay for. I started seeking out other people on a similar path — a supportive community to help me along the way. I started seeking out tools to get me where I wanted to go.

All catalyzed by Chris. Role models can be that powerful.

I have some more to say about Chris, but let’s get back to his new book for a moment.

I was lucky enough to get my hands on an advance copy, and what a treat it is. My own mission is not to get people to quit their jobs and strike out on their own — I want to get you creating, doing the thing (or things) that fill you with joy and make you glow with life; I don’t honestly care one way or another if you want to make your creative thing your livelihood as I’ve done and am doing. I just want to see you doing your creative thing, period.

If you do want to build a business doing what you love, though, The $100 Startup is an essential addition to your library. Using dozens of case studies of all different kinds of businesses — from a guy who sells mattresses and delivers them by bicycle, to a professional dog walker who nets over $88k/year — Chris brings together the major lessons he shared in his groundbreaking Empire Building Kit into an easy-to-use (and fun to read!) guide. There’s also a multi-media component, with additional resources over on the book’s website, 100startup.com.

In short, it’s awesome. Highly recommended. Go check it out.

But back to Chris.

Here’s a guy who created a $50k/year business from his website in under a year (279 days, to be exact — and it’s waaaaaaay beyond $50k/year at this point…), who’s published two books, who created an amazing conference (the World Domination Summit, headed into its second year, also highly recommended), and who is well on his way to visiting every single country on the planet before he turns 35 — mostly on frequent flyer miles, by the way — just because.

From that list of accomplishments you might think Chris is some sort of superhuman. The truth is, though, that he’s no more of a superhuman than you or I. There is one big difference between Chris (and people like him) and most other people, though, and it’s this:

In short, “impossible” is not in Chris’s vocabulary. As a result, he doesn’t limit his dreams. He might be scared of them — scared of failure, scared of success (I don’t know, I haven’t asked him) — but he dreams BIG and (just as essential) he takes real steps to bring those dreams to life, to get from dreaming to doing.

Imagine if Chris had thought (and acted on — or rather, not acted because of) any variation on the following:

“I don’t have enough experience/the right credentials yet.”

“Other people could do that, but it’s just not in the range of what’s possible for me.”

Any of these sound familiar? I’ll be honest, those are the beliefs I’ve held about areas of my own life, beliefs I didn’t even realize were beliefs. I just thought they were The Truth.

Which brings me to one of my favorite metaphors:

I call these kinds of beliefs self-installed glass ceilings, because they limit possibilities just as much as any rule or policy designed to keep you down.

Your mindset can be a glass ceiling that keeps you hunched over and playing small, or like Chris, it can be a source of incredible power that enables you to accomplish great things.

Which do you choose?

A Note on Sexism and Glass Ceilings:

It’s important to note that, because we (still) live in a sexist culture, the self-installed glass ceiling syndrome tends to operate in different ways on women than it does on men. No matter how much progress we’ve made as a society, there are still unspoken cultural beliefs and expectations about what women should/shouldn’t do, what women are/aren’t capable of.

We see them as just the way things are.

A glass ceiling is, after all, practically invisible, but you still bang your head on it when you try to stand up straight. It can take awhile to realize the problem isn’t with YOU (ie, “You’re just too tall, and that’s why you keep banging your head!”), it’s that there’s a sheet of glass in your way!

The good news is that beliefs can be changed. Mindsets can be shifted.

Elsewhere I’ve talked about the 3 ingredients that together lead to the fastest mindset transformations:

1) An inspiring role model (like Chris has been for me)

Those are the ingredients that have made the most difference in my own self-installed glass-ceiling busting. (Click here for a blog post and video in which I talk about each of those ingredients in a little more detail.) And not coincidentally, they’re the ingredients I’ve brought together in my new program for women, Time to Glow, which you can read about here.

Perhaps even Chris Guillebeau had to bust through some self-installed glass ceilings to get where he is today — I don’t know, I haven’t asked, though it would be interesting to find out! I kinda like to imagine he did, even though his glass ceilings might be different from my own, because the fact that he shattered them would make him an even more awesome role model.

Not that he needs to be any more awesome than he already is. Love ya, Chris! Congrats on the book launch!

I’m curious, have you shattered any self-installed glass ceilings in your own life? What made the difference for you?

If you’re ready to bust through your own self-installed glass ceiling, to dream bigger and go from dreaming to doing, join me in Time to Glow, my program for women who want to answer the call of their heart, tame the gremlins, and finally live the fully creative life of their dreams. Doors open tomorrow, May 9. Click here for more info and to sign up.