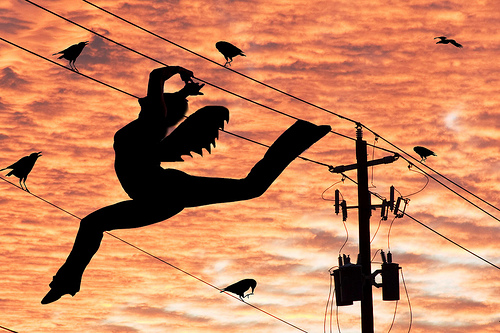 If you like to write, you should know about the cool thing my friend LaVonne has going on over at her blog, one.blue.berry.

LaVonne loves stories — she loves to write them (which she does exquisitely well — check out her juicy memoir about how she married a gorgeous Greek for his green card!), she loves to read them, and she loves to share them.

To that end, she recently started a delightful little project — sign up for her story prompts, and twice a week a one-word prompt will land in your inbox. Reply back with your (true) story — either in an email, or if you prefer you can leave a voice message on her phone system — and you may find yourself published over at one.blue.berry.

I’ve been getting LaVonne’s prompts for a couple of weeks now, and they always spark a memory and an idea, but until yesterday I never managed to carve the time to actually write it down.

This latest prompt, though, grabbed me by the throat.

“Tell me a story about: A Decision,” the email said, and it was as if I were possessed. I had to write it. I couldn’t not write it.

Maybe 20 minutes later I sent LaVonne 408 words about my decision, at age 19, to drop out of college and audition for the dance division at the Juilliard School in New York.

That’s all I’ll say about it here — if you want to read it, LaVonne tells me it will go live on one.blue.berry sometime next week. (I know, I’m mean. So sue me.)

Writing the story got me thinking about more than just that decision, though. This post is the result.

A Paradox: Playing Big and Playing Small at the Same Time

My decision to buck expectations, fly off to New York by myself and audition for Juilliard contains an enormous paradox: on the one hand, what a big, bold move for shy, 19-year-old me! My heart swells with pride for that younger self who did something that scared her so much.

Following my dreams, moving to New York to dance, was what one might call “playing big.”

On the other hand, I remember being struck by how the other dancers at Juilliard didn’t hold back in class. They danced full out. They went for it.

It may surprise you, but this had not been my experience back home. A lot of the time, in dance class, and no doubt in other parts of my life, I stuck to playing small. I danced “in the shadows.” It felt safer that way.

When I first “discovered” dance at age 16, I was thrilled at the attention it brought me. Years of being picked last for sports teams had filled me with a belief that I was a klutz, and yet after my first “real” dance class the teacher kept asking me which competitor’s studio I danced at. He didn’t believe me that my only previous dance experience had been through my high school gym “dance” classes, which were notorious for being, shall we say, light on technique.

Apparently I had some facility at this thing. Who knew?

For the next few years I dove into this new passion, dreaming big dreams of a career as a professional dancer/choreographer, while at the same time not quite believing it was possible.

My life revolved around dance and high school — there was nothing else. I was in dance classes for hours every afternoon and evening, with additional classes in the mornings during vacations. I applied myself furiously.

And yet I also held back.

I remember being so afraid of making a fool of myself, so afraid of failing, that unless I felt 100% confident in what I was doing, I practically refused to dance full out. That’s not the most efficient route to mastery, but this self-conscious display of hiding almost seemed the thing to do, in a studio where so many of the serious dancers were insecure teens like myself.

So while I dreamed of playing big, in my real life I played a lot smaller than my full size. (While at the same time I starved and vomited myself well below my literal full size, but that’s a topic for another time.)

The Power of Models

When I saw my classmates at Juilliard really going for it, holding nothing back, it was a revelation. It suddenly occurred to me that yes, if you want to make a splash, if you want to do this thing (whatever it might be), hiding and playing small is not going to cut it. No dance company it its right mind would hire a dancer who didn’t give it her all — I mean, duh!

Somehow, though, I needed to see my classmates owning the space outside of the shadows in order to give myself permission to be big. To take up space. To go for it.

I can’t blame that younger self for trying to stay safe. Some people can bust through glass ceilings all on their own. The rest of us need models to show us what’s possible.

There’s a reason activists raise a ruckus about film and TV portrayals of people in power being predominantly white and male. If you don’t see any examples of other people like you, it’s hard to imagine that they might exist, and more importantly, that you might fill similar shoes.

I’ve shared many times on this blog that it wasn’t until Chris Guillebeau appeared on my radar that it even occurred to me that I could really create a sustainable living doing what I really, really wanted. (Not that he’s the only model out there, by any means, but he was the first that I became consciously aware of.)

Stepping Out of the Shadows

One beautiful model of playing big is writer, coach and personal growth teacher, Tara Mohr — a personal hero and inspiration of mine.

I actually first encountered Tara years ago when she and her then fiance ordered a ketubah from me for their wedding. Since then she’s taken the internet by storm, blogging regularly for The Huffington Post, and appearing in national publications, and on national radio and TV.

Check out how clearly Tara articulates herself while in the hot-seat on The Today Show:

Visit msnbc.com for breaking news, world news, and news about the economy

Clearly, Tara doesn’t let fear of failure — or criticism — hold her back from her big dreams and visions. She’s dancing full-out with the world, right in the spotlight, and the world is better for it.

She’s a model for all of us.

Most brilliant women don’t see their own brilliance and are “playing small” and they know it: not speaking up, doubting themselves, seeing themselves as “not yet ready” to launch the big idea, the organization, to put themselves at the table.

One of Tara’s missions in life is to help women leaders learn “how to quiet self-doubt, clarify purpose, and become comfortable with taking bold action in the workplace and in the world.” 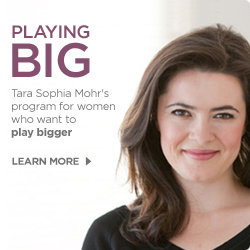 About a year ago Tara unveiled her flagship 6 -month course for women who are ready to bust through their own personal glass ceilings, Playing Big (I’m very proud to be an affiliate partner, and yes, that’s an affiliate link). Now the course is back, and Oh. My. GOD. Do I want to take it!

Had I not just signed up for both Pace Smith & Kelly Kingman’s The Way of the Peaceful Entrepreneur (also an affiliate link, though registration is no longer open) and Jennifer Louden and Michele Christensen’s Teach Now (that is not an affiliate link, but I wish it were [hint, hint, Jen and Michele!]), I would so sign up for Playing Big!

As it is, I’ll attend Tara’s free seminar on January 19 (there’s still space, as I type this), and hem and haw, and if I’m wise with my limited time and money I’ll take a deep breath and promise myself I’ll take it next time.

I hope you’ll join me. The world needs us.

(And if you sign up for Playing Big, will you tell me all about it, pretty please?)

Where have you gotten stuck dancing in the shadows? How are you continuing to play small, and what would playing big really look like in your life? Who are your role models for playing big?