Wow, what a week it’s been, and it’s only Thursday as I type this!

Two big events that I’ve worked my little butt off to prepare for.

First, a two-day calligraphy workshop last weekend, which was booked two years ago, and is the subject of this week’s podcast (more on that here).

And second, a LEGO® SERIOUS PLAY® team building retreat yesterday, for a staff office at Stanford University, which I’ve spent the past few weeks working like mad prepping.

Designing the “road map” (i.e., what happens when).

Making my “analog PowerPoint” (aka flip charts). Here are just a few of them: 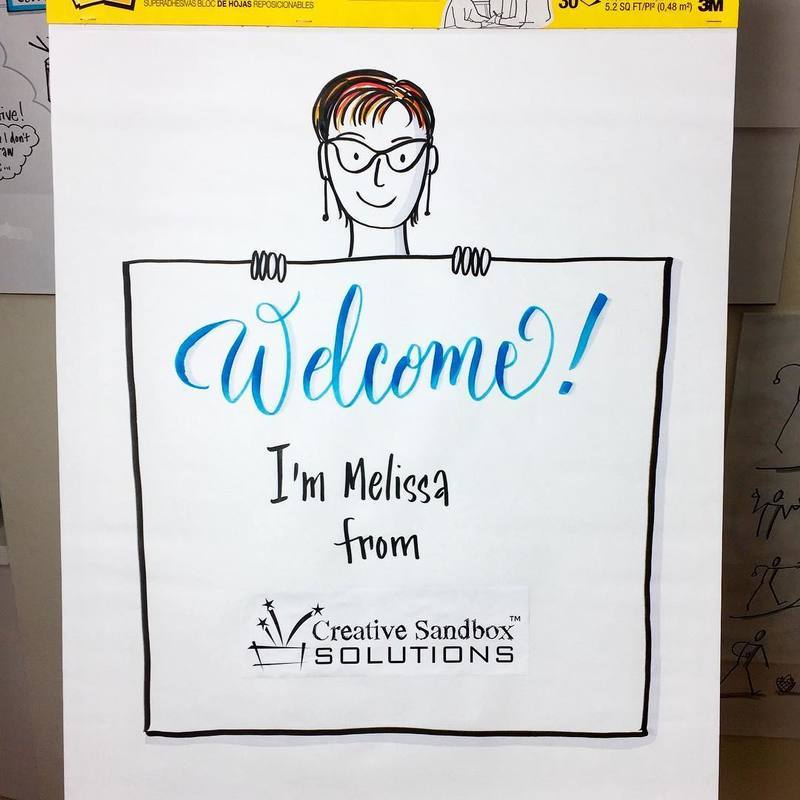 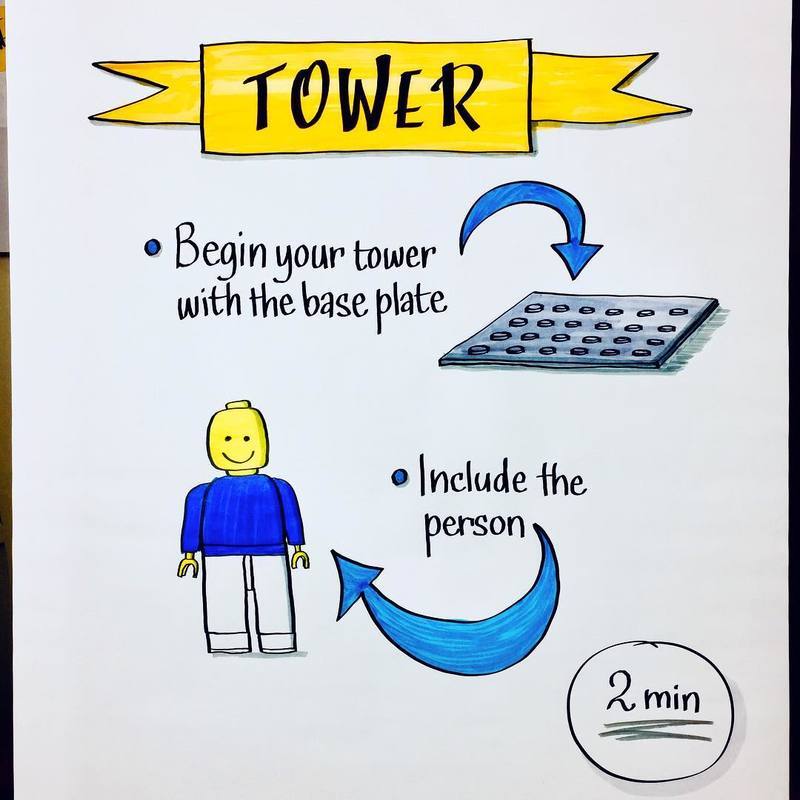 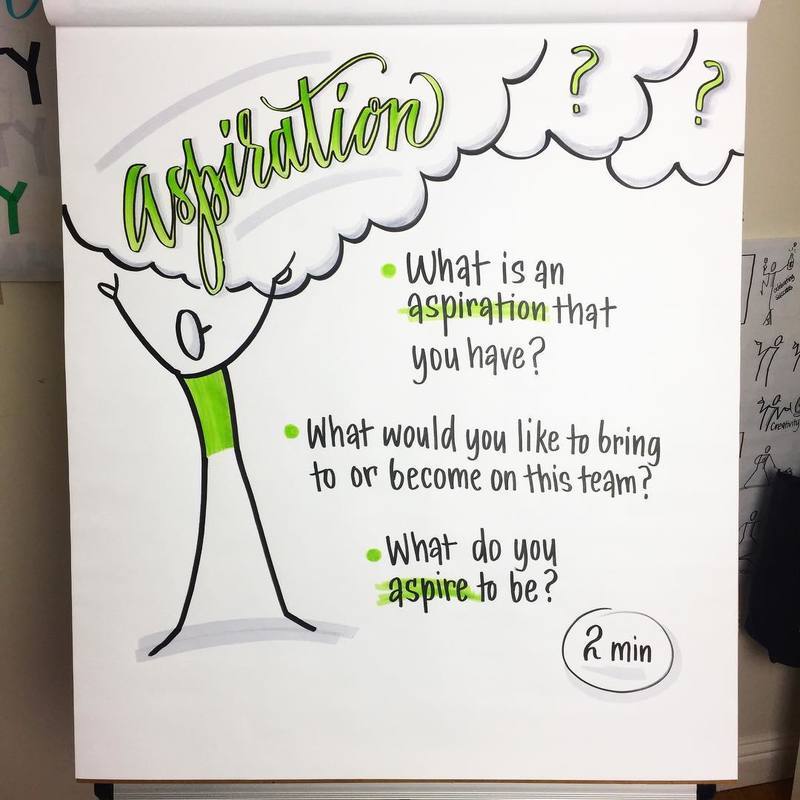 Packing up LEGO® and supplies — the LEGO alone take up a whole suitcase and most of a wheelie cart! 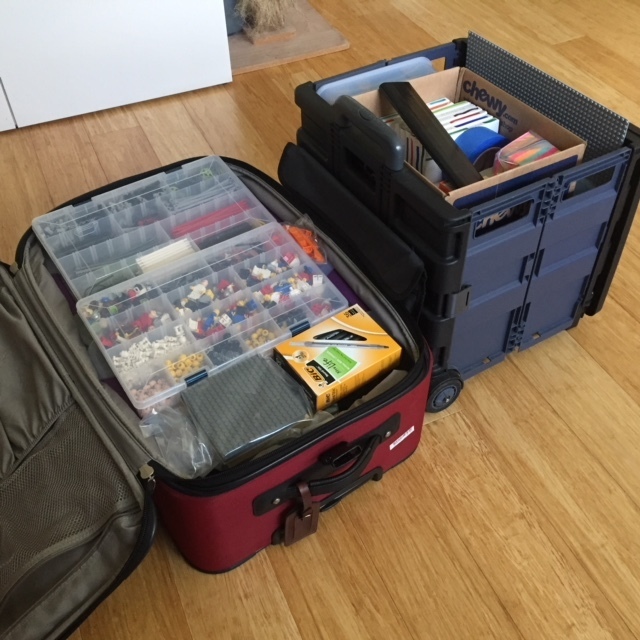 And then sketchnoting how to consolidate all those supplies to get them from the parking structure to the room! (This is visual thinking in action — I could not have figured this out without drawing it out.) 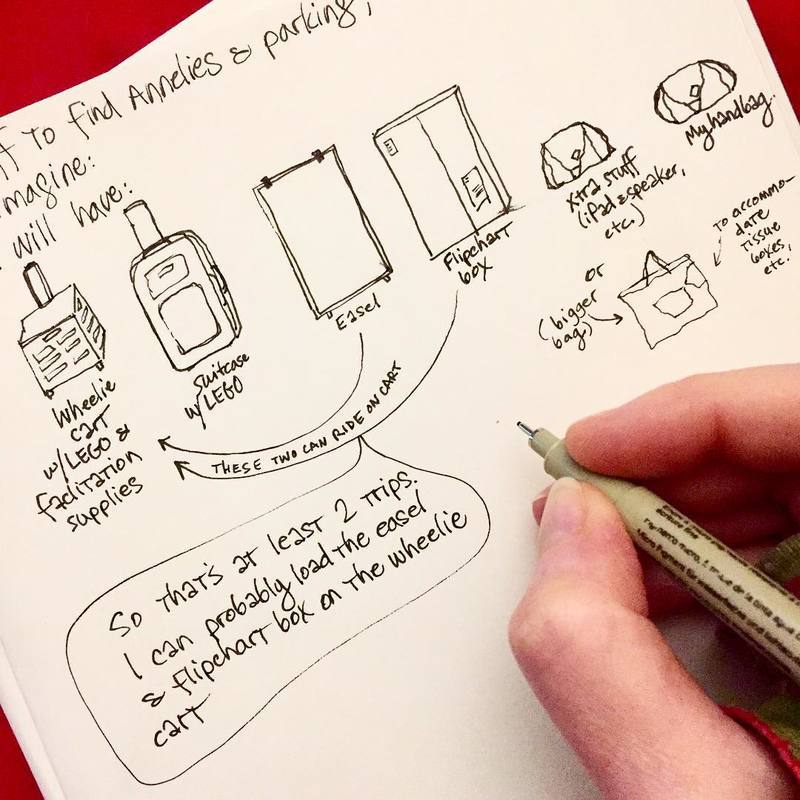 I’d used PowerPoints previously, and there are certainly advantages to going digital (no need to shlep all that paper around; it’s so much easier to customize content on the fly for each new client; you don’t have to worry about wear and tear on your charts; mistakes are super easy to fix when it’s digital!)

But people are SO TIRED of PowerPoint!

Probably because it’s a tool that has been overused and MIS-used so badly.

(For example: As a general rule, no slide should EVER have more than 7 words on it. And yet, how many times have you been forced to sit through meetings with slide after slide that looks like this: 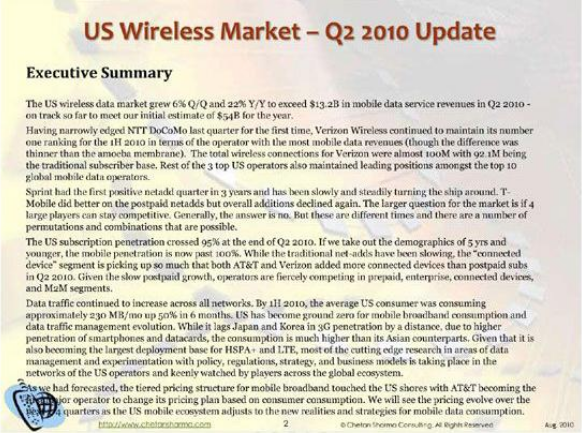 And then, adding insult to injury, the presenter READS the slide to you!!! GAAAAHHHH!!!!!!)

In fact, my contact yesterday saw my flip chart and said, “Oh, thank GOD you’re not using PowerPoint!” And I swear, I got more comments about my flip charts, drawings, and calligraphy, than anything else!

In a digital world, this is the power of handmade. 🙂

Here one of the team members listens intently as the team member to his right tells the story of her aspiration, which she built out of LEGO on the beige baseplate. (Behind him you can see sorting trays of more LEGO pieces.) 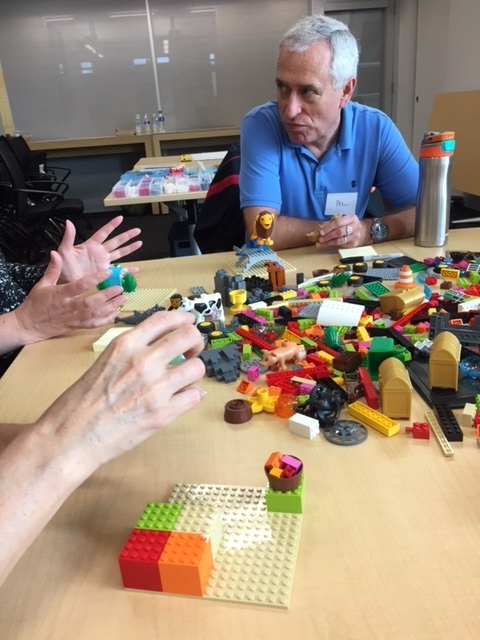 Here’s a photo of a couple of members of the team working on the group model, building their vision of an ideal, high-functioning team out of LEGO bricks: 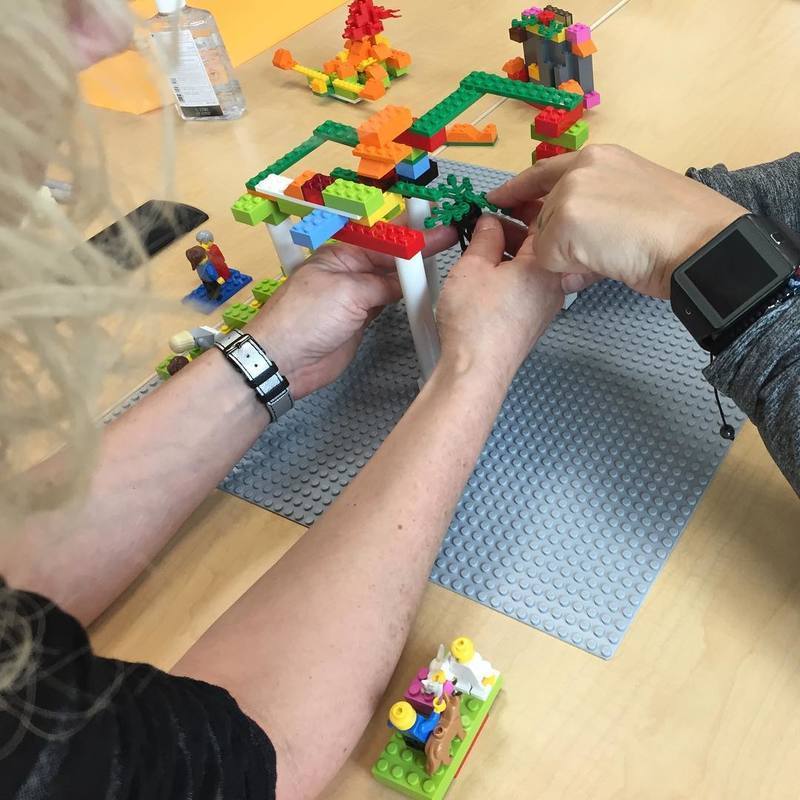 The little model at the bottom of the frame, to the right of her arm, represents “respect.” The two people on the blue base plate to the left of her left arm represent cheering each other on/giving each other ‘high fives.”

(I’d love to show you more of the laughter and smiling faces that were a feature of the three-hour retreat, but it was a shy group, and most didn’t want to be on camera. I’m grateful they were willing to let me photograph them at all. 🙂 )

Here’s a snapshot of the final “landscape,” the group model of their ideal high-performing team, surrounded by their individual identities, as people write their goals for the coming weeks on postcards: 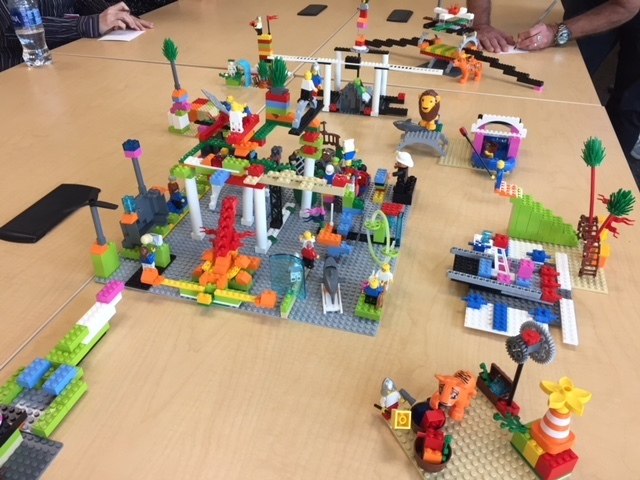 It’s colorful and fun, isn’t it? But way more fun to DO than to look at! 🙂

If you’re interested in a team building retreat for your company, click here, and let’s talk about the challenges you’re dealing with, and how Creative Sandbox Solutions can help.

Don’t need help yourself? Perhaps you know someone else who works in an organizational setting who could use some team building or conflict management support. If so, I’d love an introduction! 🙂

Simply head over to http://creativesandbox.solutions/contact