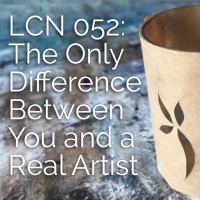 LCN 052: The Only Difference Between You and a Real ArtistMelissa Dinwiddie 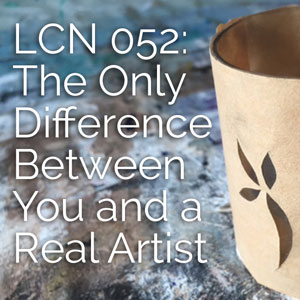 I’d recently gotten married (to the practice husband), and at our wedding we gave glass votives as wedding favors. We had a bunch of them left over, so it occurred to me to wrap some pretty papers around them and give them to my friends as holiday presents in December.

Except that I didn’t have any pretty papers, so I drove to the nearest art store.

And you know what? When I walked in that door I felt like I was trespassing.

I wasn’t an artist! I didn’t belong there! What the heck did I think I was doing?

I think I actually started sweating.

I think part of me was half afraid someone was going to call me out, even kick me out of the store.

Luckily I did manage to buy some papers, and I did glue them around some of the votives…

But then it occurred to me that if I were to cut some shapes out of the paper before gluing it to the glass, it could create a really neat effect: like a mini luminaria.

And this part cracks me up: I didn’t want to “ruin” any of the pretty papers that I bought, so I used the brown kraft paper that the papers were rolled up in when I bought them.

And because I didn’t have an X-acto knife at the time (because, I wasn’t an artist!), I actually used a paring knife to cut the shapes out of the paper.

But I really liked this papercutting thing. In fact, I really wanted to do more of it.

So maybe a day or two later, I drove back to the art store, and bought an X-acto knife.

Still feeling like I was trespassing, by the way, but if something is compelling enough, it helps you get past Imposter Complex, at least enough to spend $4.95 on a new tool.

Though I confess I felt horrendously guilty about spending $4.95 for something so frivolous, when I wasn’t earning any money at the time.

Anyway, that’s how it all started. That is the origin story of how I ultimately became an artist.

And what I want to share with you is that I could not call myself an artist for about two years.

Even though the exploring and creating I was doing was expanding my life. Bringing me joy. Feeding me.

I wasn’t an Artist. Or even an artist. I just liked making things.

And when I finally did start calling myself an artist, what was the real difference?

Was it that I had buyers? What that what made me an artist?

It’s validating, for sure, when someone pays you for what you’ve made. But I think what was really going on was something even deeper than money.

The One Real Difference

I’ve spent the past six years of writing, blogging, podcasting, teaching, and consulting, all with the goal of helping people live full-color lives. And it wasn’t until sometime last year that I realized that the only real difference between artists and everyone else — or, more specifically, between those who self-identify as artists, musicians, writers, etc., and everyone else — is one simple thing.

And it’s not talent. It has nothing to do with talent.

And it’s not whether or not you get paid for what you do.

Those of us who don’t identify as artists (or musicians, writers, etc.) simply do not feel entitled.

And I say “those of us,” instead of “those of you,” because I’ve been there. And some days I’m still there, when my Imposter Complex gremlins are rearing their ugly heads, telling me things like,

“You’re not a real artist. When’s the last time you sold a painting?”

“You’re not a real musician. If you were you’d be making music several hours a day, and performing regularly.”

“You’re not a real writer. Where’s your book?”

Permission. This is the only thing separating “non-creatives” and non-artists from everyone else.

“I don’t have permission to create, because it’s frivolous and self-indulgent.”

Or, “I don’t have permission to create, because I don’t make money from it.”

Or, “I don’t have permission to create, because I’m not as good as everybody else.”

It may come out as “I don’t have have time to create,” but who’s policing that time? I’d wager that person has the same name as you.

So how do we create entitlement?

I think you create entitlement the same way you do anything important: you set your mind to it. (Click to tweet.)

You set the intention. You practice.

And you fake it til you make it.

I remember the most godawful, humiliating conversation that I had with a couple at some event for my synagogue, right around the time when I was diving into art and calligraphy after fifteen years of truly believing that I was not a creative person.

The woman asked me what I did, and my response was something like, “I, um, well, I make things with calligraphy and I, um… style myself as sort of an artist.”

I style myself as sort of an artist? What does that even mean? It was a freaking apology!

And it was horribly embarrassing. I’m sure I turned beet red, and I wanted to disappear into the wallpaper.

It was this painful moment that made me realize that I had to stop apologizing.

For not being more advanced than I was in that moment.

For trying something new and wanting to be really good at it, and not being that good yet.

And this is what I want you to practice in your own life.

Stop apologizing for being human.

Watch for those moments when you’re not feeling entitled. Take note of them, and lean into them. Push back.

Quite possibly, at one time in your life, somebody did tell you.

A teacher or a parent, or even another kid, might have really wounded you, shamed you around a creative act. According to Brené Brown’s research, over 42% of people can remember a specific incident from childhood in which they were so shamed around an act of creativity that it forever changed how they feel about themselves.

“Just mouth the words, honey,” a choir director once told my mom.

“Who do you think you are?”

It’s not only in childhood, either.

During my first year in college, I was walking down the street one night with a group of new friends from my dorm, and one of the guys (whom I realized, years later, was probably trying to flirt with me) said, “Who told you you could sing?”

And I didn’t sing in public for over a year.

Those shaming incidents stick with us.

But the good thing is that we can overcome them.

It takes work. It takes intention. It takes practice.

But I am telling you, right now, that you are entitled.

You have permission to play and create in whatever medium or genre or format you want. You get to do it.

Now, I know that my saying that is not enough. But ultimately, you are the only one who can write your permission slip. (Click to tweet.)

So start writing it. Now.

(If it helps, download my Creative Permission Slip for free by filling in the form below.)

I think you create entitlement the same way you do anything important: you set your mind to it. (Click to tweet.)

No time to create? Who’s policing that time? I’d wager that person has the same name as you. (Click to tweet.)