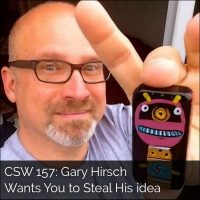 157: Gary Hirsch Wants You to Steal His IdeaMelissa Dinwiddie 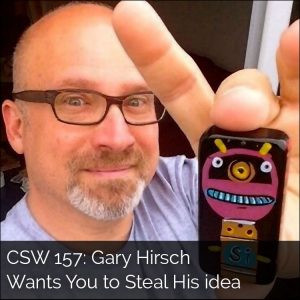 I first encountered Gary Hirsch at the World Domination Summit in Portland, Oregon, where he improvised a rock band with 3,000 people.

I’m not kidding. He made a rock band with all 3,000 of us. (You’ll hear how he did this when you listen to the episode.)

This was an activity that Gary had originally developed for a TEDx talk. He was looking for something he could do with a live audience that would also be interesting when watched later, which would demonstrate his three points:

Gary asks people to look around the space and notice something they haven’t noticed before. Then they turn to someone next to them, and combine the things they noticed to come up with the name of a rock band (for example, Chandelier Exit).

Then, using “verbal chasing,” he asks questions to find out more things about the rock band.

For example, “This band reached its height of popularity in what year?”

“And the name of the platinum selling album was…?”

etc. (Listen to the episode to hear Gary describe it.)

Listen in as we talk about letting go; the “judgment monster”; the delight of creating incomplete works that invite others to finish them; improvisation; his Botjoy project; and more.

The Concept (and Challenge) of Letting Go

We come to every creative process with a “shadow story” — what we want to have happen. This is important, because if you don’t let go of your agenda when you’re making something with someone else, you won’t progress and you can’t create flow.

Letting go and “the judgment monster”:

“Some demon takes over me, and I start to imagine that a single person in my life won’t like it… Making things can make you feel a bit crazy, no doubt.”

“Maybe one person’s crappy is another person’s snappy.”

The idea of incompleteness:

Creating incomplete stories that invite the audience to finish them. Gary gets off on (good) surprise, and letting go of an incomplete story sets up the conditions for that. Other people’s interpretations of his work often surprise him, and that delights him!

This place of being surprised is also the same place as Creative Sandbox Way™ Guidepost #6: Ask “What if..?” Which is also the place of improvisation.

Gary doodles robots on the back of dominoes. These robots do different things — bravebots help you be brave, joybots give you random joy. The project has been a vehicle for collaboration and creating art that helps people, and has led to public art murals around the world.

When Gary realized that he was the bottleneck for making these robots, he let go and made it “open source,” inviting anyone to make bots and share them.

In other words, he decided to ask the question, “How can more bots be out in the world?” instead of, “How can Gary make more bots?” So he literally made a video telling people, “Steal This Idea.”

But letting go means that people make bots and use them for all sorts of purposes, including commercial ones!

Gary has really struggled with this, and he still does sometimes, but he also enjoys watching himself struggle with it.

On Your Feet and Applied Improvisation

Gary runs a consultancy called On Your Feet, which he got started through a T-shirt! He was selling hand-painted T-shirts on the street in Portland, when a guy named Robert Poynton bought a T-shirt and struck up a conversation with him. Robert asked Gary what else he did. “Well, I do improv,” said Gary.

“How does that work?” asked Robert.

“Well, anybody could do it,” said Gary.

“How about 90 ad executives in Arizona in 2 weeks?”

Two weeks later, Gary was co-leading an offsite retreat with Robert, and that was the beginning of On Your Feet.

Gary is a co-creation junkie who believes that joy comes from collaborating with strangers.

He is facilitator, performer, muralist, doodler of robots, and the co-founder of On Your Feet, a consultancy that collides business with the art of improvisation. He is an early pioneer in the field of applied improvisation, helping organizations generate new ideas, collaborate, engage audiences and walk their talk…all while having a ridiculously good time. His clients include Nike, Intel, Disney, Apple, The British Ministry of Defense, and others

Gary is also a visual artist and the creator of Botjoy, a five-year visual experiment that uses over 40,000 large and small hand-painted robots to explore collaboration, inspiration and how art can help and heal. Gary’s public works can be seen in London, Madrid, Boulder, Dallas, Melbourne and in his hometown of Portland, OR.

Now whenever Gary is spiraling into anxiety, he creates a worry list. He always checks it later, and almost never does something manifest itself as truth that he writes down on the worry list.

Has the Creative Sandbox Way™ podcast made a difference in your life? Would you like to be featured on the podcast?

I love sharing listener stories, so if you have a story of how listening to the podcast has changed your life for the better in some way — big or small — I want to feature you in a Listener Spotlight.

2. Then copy and paste what you wrote in your review into an email, and send it to me, along with why you want to be featured in a Listener Spotlight, and how the podcast has made a difference in your life. You can email me at creativesandboxway.com/contact.