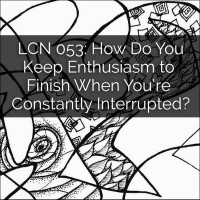 LCN 053: How Do You Keep Enthusiasm to Finish When You’re Constantly Interrupted?Melissa Dinwiddie 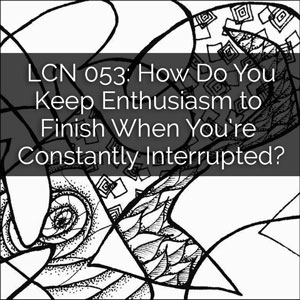 Every so often I send an “ask me anything” tweet. Sometimes the responses lead to gems, as this one did yesterday:

@a_creative_life How do you keep enthusiasm to finish a project, when you’re home with interrupting kids all day?

Ah, now that is a big question!

And as a non-parent, my first thought was from my gremlins. “Who are you to presume to give advice to a parent?” they growled.

My next thought was that when I’m enthusiastic about a project, no interruption has a prayer of dampening my enthusiasm.

Heck, yesterday all I wanted to do was work on the new dashboard I’m creating for the Creative Sandbox, and update my signature week-long ecourse, Creative Sandbox 101, to get it ready to open up again.

And though I have no kids tugging at my apron strings (or, more accurately, tugging at my yoga pants), my day was filled with interruptions (Great ClutterBust calls, previous commitments that had to be attended to, lunch…).

But the interruptions didn’t dampen my enthusiasm. They only made me more eager to get back to work!

When I’m enthusiastic about a project, it’s pretty much all I think about. No interruption stops that.

That wasn’t going to be a helpful response to @LisaWritingWild, though. I mean, my goal is to help people, not make them feel bad!

So I tentatively started thumbing in my reply…

@a_creative_life I dive in ready to create (write), & am pulled away almost immediately. Just about every time. — Writing Wild (@LisaWritingWild) April 19, 2016

…and in the middle of those 140 characters it occurred to me that @LisaWritingWild’s interrupting kids might not actually be killing her enthusiasm for the project itself.

No, I suspected that her little interruptions were killing her enthusiasm for starting, when she knows her efforts will be halted as soon as she starts.

So I tweeted back:

@LisaWritingWild or are you hesitant to dig in, because you know interruptions are inevitable? If your kids are old enough, you can start…

@LisaWritingWild ..explaining to them that mommy needs alone time to focus on her writing. You are the only one who can set those limits… — Melissa Dinwiddie (@a_creative_life) April 19, 2016

@LisaWritingWild ..and assuming they’re old enough to be unsupervised for a period of time, drawing lines around your creative time will…

@LisaWritingWild ..teach them the creative time is important. AND that respecting mommy’s needs is important, too. (You want them to feel… — Melissa Dinwiddie (@a_creative_life) April 19, 2016

@LisaWritingWild ..assumes that your kids are old enough to have some unsupervised time! ?

@a_creative_life I’m trying. The 5yo is the toughest.

Ah, yes. Here’s where it comes in handy to have a background as a nursery school teacher, and a mom who is an expert in social problem-solving with young kids, complete with a Masters Degree in Human Development.

This kind of stuff is dinner conversation with my mom (though, alas, she didn’t know all she does now when I was a young child…)

I kind of absorbed a lot of stuff through osmosis, growing up with my mom. And though I do not claim to be an expert in parenting or dealing with kids by any means, I did have some ideas to share.

So I tweeted back:

@LisaWritingWild yeah, that’s pretty young.. It will be an imperfect practice for awhile, but it’s good to start training them young. ?

@LisaWritingWild Also, some little ones will happily join in, if getting alone time is impossible. “It’s creative time. You can be in the..

@LisaWritingWild ..room with me IF you quietly do your creating while I do mine.” You can also try setting a timer-might just be 5 mins at..

@LisaWritingWild ..1st. But you can gradually build up. “I am going to write for X mins. If there are NO interruptions, then we can…

@LisaWritingWild [fun thing kid wants to do]. But only if there are NO interruptions.” The hardest thing is holding fast to limits, but if..

@LisaWritingWild ..you do, they will learn to honor them. Eventually. ? But NEVER if you don’t stand firm. (So hard!)

I’m not saying this will be easy (it’s always much easier to give advice than to implement an idea in real life!)

The Importance of Setting Limits

What I am saying is that setting limits is essential.

And whether you’re dealing with a 5-year-old child, or a 55-year-old spouse, or anyone else, for that matter, YOU are the only one who is going to set limits on your time and availability. (Click to tweet!)

Nobody else is going to do it for you. It’s not in their immediate self-interest to leave you alone, so you can’t expect them to!

It is in their long-term self-interest, because without your create time you are likely to turn into a cranky, resentful, Demon Mother From Hell. But they are not going to make this connection themselves.

Left to their own devides, kids (and let’s face it, most spouses too!) are only going to go after immediate gratification!

So it’s your job to train them. And until you do, you are going to be intimately acquainted with resentment.

What You Need to Know About Resentment

Here’s the important thing to know about resentment: it’s not actually about the other person.

Resentment is anger at yourself, misdirected at someone else through the lens of victimhood. (Click to tweet!)

In other words, resentment is a clear signal that you didn’t draw a line somewhere. Or you drew it, but you didn’t hold it. (Click to tweet!)

People are always going to go after what they want, and if what they want is your attention, they will keep going after it until you make it very clear what you will and won’t allow.

If you don’t make it clear? You may as well get comfortable on the ground, because there will be nothing to distinguish you from a doormat.

And by the way, it’s not just people who will draw your line for you, if you don’t draw it yourself.

Lessons Learned from My Cat

Back during my ill-fated marriage to my first husband — the practice husband — we had a cat who had that poor man wrapped around her little white-booted paw.

Koosh, of blessed memory, my sweet tuxedo kitty. Ah, how I miss her. 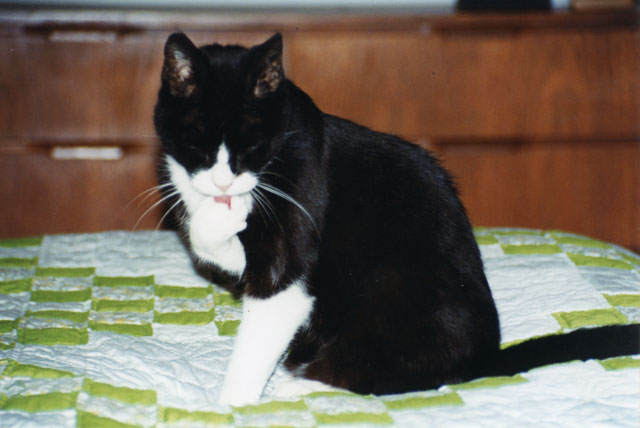 She would curl up in my arms every night, but at 4:00am she’d make her way over to the dresser and take a flying leap onto the practice husband’s belly.

Needless to say, it was quite effective at waking him up. And, as Koosh quickly learned, when she woke him up he would feed her.

Every day he would complain that the blasted cat was ruining his sleep, because once he got out of bed and put food in her bowl, he was too wide awake to fall back to sleep!

But the fault wasn’t really Koosh’s. She was just being a cat, doing what cats do.

He was the one who was teacher her that leaping onto his belly at 4:00am was an effective strategy to get an early morning snack.

I should mention that Koosh never leaped onto my belly, because the few times she tried, I ignored her, rolled over, and went back to sleep.

Take a Look Inside

If you’re constantly interrupted when you’re trying to create, whether you’re dealing with cats, kids, or anyone else, instead of just blaming them, look at your role here. What are you teaching them about the value of your creative work (and hence the value of creative work in general)?

What do you want to teach them?

What needs to change to teach them that?

This is where you get to use your creative brilliance to figure out how to make it work.

If you don’t feel like you can draw a line, then there’s likely a deeper issue going on: maybe you don’t feel a sense of permission to take time for yourself, or maybe you have some more work to do (many of us do) on limit-setting in general.

You are the one who has to draw the line.

Whether you’re dealing with a 5-year-old child, or a 55-year-old spouse, YOU are the only one who is going to set limits on your time and availability. (Click to tweet!)

Resentment is anger at yourself, misdirected at someone else through the lens of victimhood. (Click to tweet!)

Resentment is a clear signal that you didn’t draw a line somewhere. Or you drew it, but you didn’t hold it. (Click to tweet!)