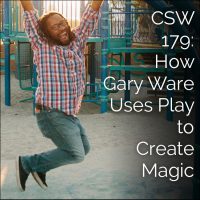 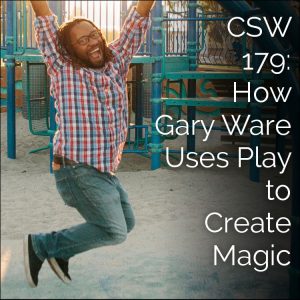 Gary Ware is the Founder of Breakthrough Play, a company that helps teams be more creative, confident, and collaborative using play. To do this, Gary incorporates techniques that professional improvisers use to create amazing experiences without a script.

Gary has been in the marketing and advertising industry for over a decade and first got into improvisation as a way to better his public speaking. Gary quickly found that improv and play could be a solution to various business challenges, so he started doing workshops for his team and other people in his network.

I met Gary when we both attended the Applied Improvisation Network World Conference last summer, in Irvine, California. He was not only a fellow play evangelist, but he was incredibly generous. I felt like I’d met the little brother I’d always wanted.

Of course I had to have him on the podcast!

Have a listen to our conversation, and let me know what resonates most with you about Gary’s story. How will you integrate play more into your life?

In this episode we talked about:

Mentioned In This Episode:

Episode 157: Gary Hirsch Wants You to Steal His Idea

Play: How it Shapes the Brain, Opens the Imagination, and Invigorates the Soul by Stuart Brown

“Once I graduated, then that belief, that methodology that I followed with my dad of ‘you can play when the work is done’ didn’t work because, as we all know, as professionals, whether we run our own business or work for a company, there’s more work than can get done.” – Gary Ware

“It wasn’t until I found improv until I realized ‘oh my god, it’s play again!’”- Gary Ware

“When someone that you trust gives you a piece of advice, even if it terrifies you, sometimes you just gotta do it.” – Gary Ware

“It [improv] helps you become a better leader.” – Melissa Dinwiddie

“Improv is just one form of play.” – Gary Ware

“Most adults hate playing and their impression of playing is that it’s frivolous, it’s stuff that kids do, it’s a waste of time.” – Gary Ware

“There is science that backs up that play is just as important as breathing.” – Gary Ware

“If only we could get our world leaders to play together.” – Melissa Dinwiddie

“If you add play to any sort of situation magic happens.” – Gary Ware

“In the business world, when you add play to brainstorming that’s when innovation happens.” – Gary Ware

“Boring is zero arousal. You are not compelled to do anything.” – Gary Ware