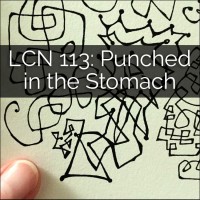 LCN 113: Punched In the StomachMelissa Dinwiddie 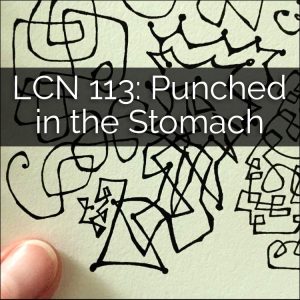 Five years ago I did something really risky.

Even though it made my stomach lurch, I put money down on a deposit at a retreat center a half hour away from my house to host a creativity retreat.

Three days and two nights, full room and board. I was hoping to get ten people — well, nine people plus me — but I was on the hook to pay for eight.

Seven people people signed up, so I just got my eight. Barely. We made it happen.

Now here’s the thing: I really wanted it to be five days and four nights, but I knew there was no way I could get people to commit to that my first year out of the gate, because retreats are expensive. Even when you’re not going all five-star, premium, white glove.

So I gritted my teeth and I did what I knew people would be willing to spring for.

And guess what everybody said at the end of the retreat?

“It was too short! I wish it were longer!”

So the next year, 2014, I made it three nights. And I got seven people. Eight altogether with me.

And it was wonderful. And at the end, guess what everybody said?

“It was too short! I wish it were longer!”

And it was lovely, and at the end everybody said, “It was too short! I wish it were longer!” but this was clearly not a good trend. I thought maybe the retreat was just not meant to be. Maybe 2015 was going to be the last year.

But I’m nothing if not persistent.

So last year, 2016, I ran Create & Incubate Retreat again, five days and four nights, and last year there were seven of us altogether, and something shifted.

The energy was magical.

And last year, although I didn’t have a date booked for 2017, because the venue wouldn’t let a tiny retreat like mine book so far in advance, I was organized enough to have registration forms that people could use to reserve an early bird spot for a special price.

And when everybody handed in their filled-in forms, I knew I had hit my stride. Something had finally clicked.

Then a few weeks later I was able to book the date and finalize the contract with the venue and everything was hunky-dory.

Or so I thought.

Then back in March, I got a call from Eric, the Director over at Presentation Center, the venue I’d used for Create & Incubate Retreat for the past four years.

The venue that I had a signed contract with and a deposit with, if you will recall. And, by the way, I’d just called them two days before to pay an installment payment on my contract.

So Eric leaves me a message saying he needs to talk to me about my retreat ASAP.

When I finally reach Eric later that afternoon, he shared that, due to their financial circumstances, the Presentation Center Board of Directors had decided to close down the center, effective June 1st.

Rather than honor their existing contracts, the Board broke all of their contracts that extended beyond June 1st!

As you can imagine, I was in shock. I felt like the floor had just dropped out from beneath me.

And poor Eric! He’d just found out himself, and now he was hoarse from spending the entire morning phoning the 68+ conferences and retreats that had contracts after June 1st to personally let them know, so they wouldn’t be shocked to receive the notification letter in the mail.

Many of these conferences had dozens of attendees who had not only already paid to attend, but had purchased plane tickets from overseas!

Plus he, and the entire staff of Presentation Center, were also now out of work!

Anyway, here I was, in a state of shock, wondering what was going to happen to Create & Incubate Retreat…

Right before leaving town for the weekend to deliver a speech, suddenly I had to find a new venue for our retreat on very short notice!

When dozens of other conference and retreat organizers were also suddenly looking for new venues on very short notice, too…

Could the timing be any worse?

But for once the gods were smiling. 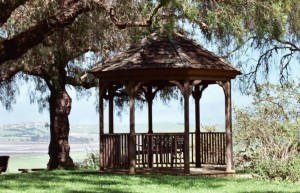 Literally the second phone call I made was to St. Francis Retreat, where one Brother James picked up the phone.

“I’m sorry, we’re fully booked that weekend,” he said, as I expected.

“Well,” I said, “since I have you on the phone, do you ever host small art retreats? I’m looking for a new venue for my retreat for just 7-10 people, since Presentation Center is closing.”

My heart lifted. Hope! I could barely believe my luck!

I drove down for a site visit the Monday after my weekend away, and it is perfect for the retreat!

A group of quilters were busily creating in the Upper Room (next to the dining hall), and a flock of wild turkeys even roamed by while I was there, as if giving their blessing to our retreat.

Life doesn’t always work out the way we want. It presents us with turning points, forks in the road.

Do we give up? A viable option, to be sure, and not a dishonorable one. Sometimes it makes sense.

Or do we take the other fork and press on, even though it’s going to be hard?

Often either option is hard.

In this case, giving up would have meant putting the breaks on all of the momentum and good will that I’ve built up over four years. It felt like I was finally getting traction — all of those retreatants who signed up on the spot for this year before I even had a date confirmed. Plus two more had just signed up.

And I would have had to give back all the money to people who had already paid me. Money that is not just sitting in a pile somewhere.

So giving up didn’t feel like a viable option.

The truth is, Create & Incubate Retreat is not a “profit center” for me. (Especially with the change to the new venue, which charges actual market rates, instead of below-market rates that drove it out of business!)

Retreats are expensive to produce. I was just at a telesummit last week where one of the speakers, who’s a financial advisor and coach to other coaches, was saying that he tells a lot of his clients that if they want to improve their bottom line, they need to get rid of their retreats.

But my retreat is not about my bottom line. It’s about my soul.

If it were just about my bottom line, I’d dump it in a heartbeat. But a lot of things in life are about more than money.

Art. Community. Connection. Nature. Love. White space. Time to create just for you. Laughter. Joy. Good conversation. Learning. Growing. Making friends. Delight. Discovery. Insight. A flock of wild turkeys walking by. Gazing at the stars. Inspiration. The buzz of energy in the room when everyone is working on their creative projects, which energizes and inspires YOU as you work on YOUR creative project.

You can’t put a price tag on that.

Money-wise, the return on investment for my time and energy to produce Create & Incubate Retreat doesn’t make any sense from a business perspective.

But from a soul perspective it’s a necessity.

At seven, I have the same number of registered retreatants right now as I had last year. I have space for 3 more if you’d like to join us. Prices go up (and the option to pay in installments goes away) on July 1st.

This week’s Something Cool is an example of something created for love. It’s a video of, well, high-diving giraffes.

When I see something like this, that somebody — or a bunch of somebodies, I’m not sure — put a lot of time and energy into, for no good reason other than to delight themselves and maybe other people, well, I just think that’s cool.

Check it out. It’s about five and a half minutes long.

2. Then copy and paste what you wrote in your review into an email, and send it to me, along with why you want to be featured in a Listener Spotlight. You can email me at livecreativenow.com/contact.