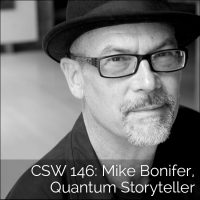 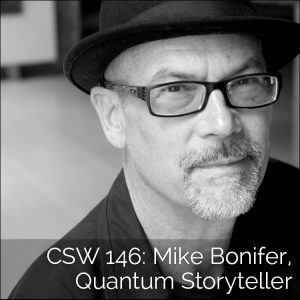 Mike Bonifer became a storyteller sitting in a tree on his family’s farm in Indiana.

His father was obsessed with creating a theme park for rehabilitated horses, but at ten years old, the oldest of six kids, Mike thought this was a terrible idea.

Somehow, sitting in that tree, it struck him that if he could tell a story about what his dad was doing, it would make sense to everybody, himself included.

It was years before he actually wrote that story, but that moment in the tree set Mike on a path, and his life has revolved around story every since.

When he finally did write the story of his dad and the theme park, a screenplay he called The Legend of Cowboy Bob, he had some offers from people to buy the script, but he insisted that Bill Murray get right of first refusal to play his dad. The problem was, nobody could find Bill.

So after about eight weeks, Mike decided to look for him himself.

He drove across the U.S. with a video camera, asking every single person he crossed paths with if they had seen Bill Murray.

He never did find Bill, but his quest turned into a one-hour documentary called Finding Bill Murray, which screened on the side of their barn in Indiana a week before his dad died.

“I thought it was about finding Bill Murray. It was about showing this movie as an homage to my father a week before he died for 200 family and friends project and on the side of our barn on the most beautiful night I have ever spent on our farm. And that’s when I didn’t have to find Bill Murray anymore.”

That’s just the first eleven minutes of our conversation.

Mike’s work in Hollywood has a similar trajectory. He worked as a publicist on the original Tron.

“…that’s another one that I called today a story engine and I distinguish between what the film did at the box office as a linear story and what that what the outcomes were. When you viewed Tron as a story engine like what spun out of it, and you start looking at Pixar and blue sky animation in particular as two entities that have their roots traceable to Tron and probably wouldn’t exist in the forms that they exist today or have the success if it hadn’t been for Tron, so you know there’s a trail that you can follow and look back at the story engine of Tron versus the movie, which was a mediocre box office performer.”

In other words: “The outcomes are so much more long-lasting and sustainable than the objective.”

This is just the tip of the iceberg of a very dense conversation!

Here are a few of the resources that Mike mentioned:

I hope you’ll tell me what you resonated with the most!

Mike has worked in Hollywood — starting out as the publicist for the original Tron movie, and he was the founding producer of The Disney Channel, where he pioneered the Walt Disney Company’s entrance into cable television with the legendary documentary series, Disney Family Album.

As the producer of the award-winning website for Toy Story, he introduced movie fans to Pixar’s extraordinary storytelling, and co-founded Network LIVE, producer of some of the biggest online music events in history, including 2007’s Live Earth concerts for the environment, for which he served as Chief Storyteller.

In 2007, he wrote and published GameChangers – Improvisation for Business in the Networked World, and, with Dr. Virginia Kuhn of USC’s School of Cinematic Arts, co-founded GameChangers, a learning company that applied improvisation to business communication. His work with GameChangers dramatically improved the performances in units of companies such as Skype, Gap Inc. The Walt Disney Company, United Airlines Media, Gawker Media, NetApp and GE.

He has conducted university workshops in Public Health, Entrepreneurship, Engineering, Sociology and Cinema; collaborated with Alan Alda on a workshop for the Viterbi School of Engineering at USC; explained quantum storytelling to physicists at the Lawrence Livermore National Laboratory; coached Ron “The Garden Gangster” Finley on his famous TED Talk on urban gardening; and was the featured storyteller at the 2014 San Miguel International Storytelling Festival in San Miguel de Allende, In 2015, he conducted workshops in Central America for the Notre Dame Executive Education program.

More recently Mike is a co-founder and partner at bigSTORY, a company of strategists & practitioners who are first in the world to utilize quantum storytelling, an emerging organizational science that accounts for how stories are created, live in networks, and influence behaviors.

Something cool is on vacation, but will be back next week.

2. Then copy and paste what you wrote in your review into an email, and send it to me, along with why you want to be featured in a Listener Spotlight, and how the podcast has made a difference in your life. You can email me at livecreativenow.com/contact.