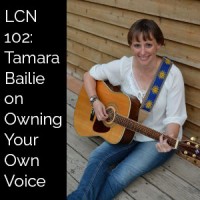 LCN 102: Tamara Bailie on Owning Your Own VoiceMelissa Dinwiddie 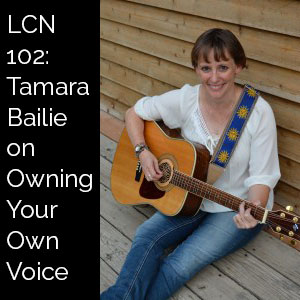 Tamara Bailie knows a thing or two about owning your own voice.

I first met Tamara at Patti Digh’s Life is a Verb Camp in 2013, and when I started the Live Creative Now podcast a couple of years later, I knew I wanted to have her on the show.

At some point in her journey, someone said to her about her songs, “These are great songs, if you could just get someone else to sing them.”

Thankfully, she met someone later (someone who would become a long term music partner) who was able to tell her that her songs were hers, and she needed to sing them.

We all need someone who can reflect this back to us. Who can remind us (as Patti Digh did for Tamara) to let go of the outcome.

(Remind you of anything? Guidepost #2 of my book, The Creative Sandbox Way, is “Think process, not product.”)

Having those people in her corner enabled Tamara to go on and not just write a whole bunch of songs, but perform them as well! And oh, the stories! Have a listen.

Tamara’s family business is running a gymnastics training center for children. But her thing, the thing she does for pure love and joy, is songwriting. And then there’s the glass blowing, which is a more recent passion she kind of fell into (you’ll have to listen to find out the story of that).

Tamara’s first song was a birthday gift for her eldest daughter, when she turned two. At the time of this conversation that daughter was seventeen, and Tamara had put out ten albums, and over a hundred songs.

One of Tamara’s statements, which she learned from someone else, and which has kept her going over the years, is this: “If you only have a few chords, you can put together a song.”

Words to live by, and a metaphor for so many things — not just songwriting!

Songs have been a powerful way for Tamara way to process both bad and good things in her life. “If you listen to a lot of my songs, you’ll get to know me about as well as anyone.”

Listen for Tamara’s story of facing fear and getting up to sing in front of people even when she was scared, and how that made a difference for other people.

When we’re brave, it helps other people be brave, and as Tamara said in our conversation, “that even helps me be brave the next time!”

Amen. I feel braver about the scary things I’m facing in my own life, having re-listened to our conversation. 🙂

There is so much more to this conversation. I hope you’ll have a listen!

And find Tamara at:

A New Experiment: Something Cool

Last week I started an experiment, inspired by a podcast that I listen to with my husband, called Scriptnotes — a podcast about screenwriting and things that are interesting to screenwriters, co-hosted by Hollywood screenwriters John August and Craig Mazin.

I’m not a screenwriter, but my husband is, and he loves this podcast. And it’s entertaining enough that I actually really enjoy it, too. So we listen to it together when we’re making dinner on Tuesdays.

Anyway, at the end of each episode, they have what they call One Cool Thing. Each of the hosts (and their guests, when they have them), share something cool.

Nothing to do with screenwriting — just a cool thing that they want to share.

I really like this idea, and it occurred to me, you know, I have so many cool things that I would love to share with you, so why not, as an experiment, add a little section to the end of the podcast, where I share something cool?

So last week I shared an Instagram feed that delighted me. And this week I’m making it official.

We’ll see how it goes. It’s an experiment.

This week’s something cool is red lentil pasta.

It’s yummy. It’s pasta. But without all the carb loading.

I think I’ve died and gone to heaven.

Meanwhile, be sure to check out…

The Art Bundle for Good

Click here to check it out and grab it before it’s gone: bit.ly/ABG2017