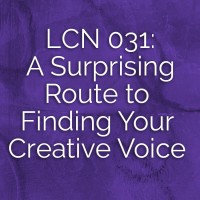 LCN 031: A Surprising Route to Finding Your Creative VoiceMelissa Dinwiddie 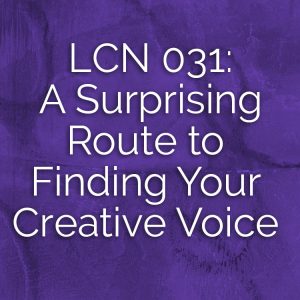 Most creators I talk to, especially beginners, are obsessed with the concept of voice, or personal style. How to find it? How to cultivate it so it’s distinctive and truly yours?

I’ve offered thoughts on this subject in this podcast episode, but today I want to talk about a surprising way to find your voice that I didn’t touch on there.

First though, let’s take a brief trip back in time, back to the 1980s. Trust me, it’s relevant, and all will become clear soon.

When I was sixteen, I took my first modern jazz* dance class at a private studio. I instantly fell in love with this sexy style of dance, characterized by its turned-in knees, isolations of individual body parts (rolling the hips, or the ribcage, or just one shoulder, for example) and, of course, “jazz hands.”

This was the dance style commonly seen in Broadway musicals, and also featured in the music videos that were just starting to appear on television back then.

(Plus, of course — for those who remember the 80s — jazz was the kind of dance performed by the Solid Gold dancers:

Good God. Was this really considered cool back then? I think my friends and mocked them at least as much as we wanted to be them.)

Jazz dance is heavily influenced by ballet and modern dance, along with vernacular and social dance forms, but perhaps the most influential individual figure in the field of jazz dance in the twentieth century was Bob Fosse.

If you’ve ever wondered where jazz hands came from, you can credit Fosse.

He was also responsible for those turned-in knees and toes, and hip and shoulder rolls, and his dances often featured the use of props, such as bowler hats, gloves, canes and chairs.

The man was an innovator, with a distinct style, a completely original voice that just screams, “Fosse.”

Where did he come up with all of these creative stylistic innovations? Not where you might expect.

Fosse’s distinctive style didn’t appear out of thin air. In fact, his particular contributions were born out of the gap between his limits and the existing canon.

Those turned-in knees and toes, for example, came from Fosse compensating for his own lack of turnout.

Turnout is the term for outward rotation of the leg, which allows for greater extension of the leg, especially when raising it to the side and rear. It’s absolutely foundational to ballet and classical dance, so good turnout (i.e., as close to 180 degrees as possible) is highly desired in a classical dancer.

Fosse’s legs turned in, however. The guy had lousy turnout, but he didn’t let that stop him. Instead of trying to fix his flaws, he exaggerated his own pigeon-toed look in his choreography.

Rather than struggling to fit himself into the existing ideal, which he’d only ever be able to do poorly, he focused on his perceived weakness and turned it into a strength.

That turned-in look wasn’t the only place where he did so, either. He was self-conscious about being bald, and according to Fosse’s biographer, Martin Gottfried, “His baldness was the reason that he wore hats, and was doubtless why he put hats on his dancers.”

Similarly, he used gloves in his performances because he did not like his hands.

Instead of fighting or running from the gap, he mined it, and it led him to a unique style that rocked the dance world for generations.

Bob Fosse isn’t the only creator who found his unique voice by mining his gaps.

One of my favorite examples is Carl Rohrs, a calligrapher with a quirky, signature style.

Trained as a sign painter, Carl works with brushes, both flat and pointed, plus all manner of pens and other tools. He draws from a multitude of traditional lettering styles, but no matter what he does, it looks “like him.”

I know right away if a piece of lettering was done by Carl (or, at minimum, someone who studied under him).

I’ve taken several workshops from Carl Rohrs, but one moment from one workshop in particular stands out clearly in my memory.

Carl was demonstrating the difference between classical italic calligraphy and a more stylized version that we were learning in class, and he offhandedly mentioned that the reason his letters always seem to dance up and down along the baseline is because he was never great at making his letters sit perfectly evenly in a line.

In other words, there was a gap between his abilities, and the perfectly-aligned canon of classical italic.

So what did he do? Instead of beating his head against a wall, trying to get better at making his letters sit perfectly evenly, he took his calligraphy in a different direction entirely.

He mined the gap, ditched the guidelines that are the staple of formal calligraphy, and created a lively style all his own that has influenced thousands of calligraphers (and sign painters) who came after him.

I think it’s easier to discern someone else’s unique style than it is to see your own. When I look at my own work, though, the places where I can see (or hear?) my unique voice coming through the strongest are quite often places where I’ve mined my gaps.

In the 200 or so calligraphic ArtSparks I’ve created, I developed a unique style of lettering born of my impatience.

I wasn’t interested in taking the time to draw guidelines, or (similar to Carl Rohrs) to try to craft “perfect” formal letters, so I not only allowed my letters to be “imperfect,” I exaggerated their imperfection, allowing not just their heights to vary, but their widths as well – big no-no’s in traditional formal styles of calligraphy.

With my latest series of paintings, I’ve rejected even further any attempts at perfection. Photorealism is not my strength, so I’ve exploited that gap to explore the other direction: abstraction.

And burned out from years of meticulous, nit-picky work as a ketubah artist (such as on this piece, and this one), I’ve intentionally gone in the other direction, toward speed and randomness, making more minimalist pieces using a bamboo skewer as a mark-making tool.

I have very little control over the flow of ink coming off the tip of the skewer, which makes even lines impossible. The irregular, even erratic line quality I get with these bamboo skewer paintings is part of my signature style with these paintings — my artistic voice.

Martha Graham (another dancer/choreographer who forever changed the dance world) is credited as having said, “No artist is pleased. [There is] no satisfaction whatever at any time. There is only a queer divine dissatisfaction, a blessed unrest that keeps us marching and makes us more alive than the others.”

In other words, whether due to your body shape, your eye-hand coordination, or for any other reason, there is almost always a gap between what we wish to create, and what we’re capable of creating in reality. This gap tends to get narrower as we increase our skills, but if creative form is a challenging one where you can continue to grow forever, the gap never goes away completely.

For many creators, this leads to enormous frustration, but I invite you to consider that this gap can have a positive side, if you let it.

In other words, your gaps are an entryway to your unique voice. Investigate your gaps and you will unearth your voice, guaranteed.

Think about that the next time you set out to create.

* To anyone familiar with jazz music, “jazz dance” is an annoying a misnomer. Jazz music is a musical genre that encompasses an incredibly wide range of styles, but always incorporating improvisation. “Jazz dance,” on the other hand, is highly choreographed, and rarely improvisational at all.

Resources Mentioned in this Episode

LCN 016: How to Find Your Unique Voice