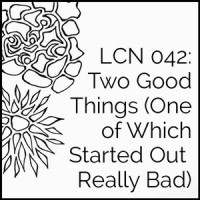 LCN 042: Two Good Things (One of Which Started Out Really Bad)Melissa Dinwiddie 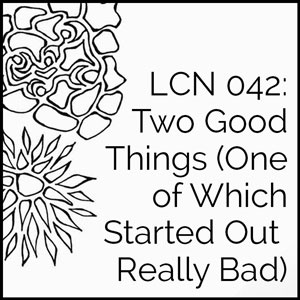 Two interesting things happened to me this week that I wanted to share with you.

The first thing is something really good that I didn’t even realize until someone else pointed it out to me!

The second thing started out as something pretty bad and painful, but turned into something really good.

Let’s start with the first thing.

I just finished up the latest session of Creative Sandbox 101, and in the feedback survey that I ask new grads to fill out, one of the members reminded me that Monday was an important anniversary!

I was momentarily confused, because my wedding anniversary is in December, not February.

Then it hit me: February 1st is my Art Anniversary! That was the day when I actually committed to making art for me again, after over a decade of stuckness.

Five years ago, on February 1, 2011, I interviewed artist Michele Théberge, as part of my first online course, the Thriving Artists Project (which no longer exists, but Annual Members of my Creative Sandbox get access to all of the interviews and lessons).

In that interview, Michele — who mentors aspiring fine artists in addition to being an artist herself — mentioned that she tells her mentees, “If you can’t put 15 minutes a day into your art, you’re making an excuse.”

My mind was reeling inside, though, because the defensiveness masked the truth: SHE HAD NAILED ME!

It was that phone interview that made me realize that I HAD BEEN MAKING THIS EXCUSE FOR OVER A DECADE!

It had honestly never occurred to me to try putting in such teeny tiny bits of time… because it was never really about the time.

It was an excuse, pure and simple.

“I don’t have time” was a convenient excuse that allowed me to deny the truth: that I was avoiding making art out of fear.

By the end of my interview with Michele, I had decided that I was going to try this 15 minutes a day thing, by gum, and I was starting THAT VERY DAY!

I committed to putting 15 minutes a day (minimum) into art-making for the entire month of February, and not only did I succeed, I kept it up!

It surprised me to discover that 15 minutes is actually enough to get into a state of flow (who knew?). Even more surprising was that just a little bit on a daily basis kept my toe in the Creative Stream way better than a big chunk of time once a week (which, of course, I never managed to create!)

Then in March or April that year I started my ArtSpark Newsletter, as a way to hold myself publicly accountable to my commitment to playing in the Creative Sandbox every day. For several months the ArtSpark went out five days a week.

That was more than I’d made in the previous DECADE! (That decade of making excuses… )

Now it’s exactly FIVE YEARS LATER! Wow! So much has happened in that time!

I haven’t always made art every day, but I have absorbed and integrated tools and techniques that have helped me make my life more full-color and more creative than ever.

So Happy Art Anniversary to me!!!

Epilogue to Thing the First:

Eventually the ArtSpark Newsletter began to feel like a ball and chain. I was spending more time uploading/downloading and posting than I was putting into the art!

So I pulled it back to 3 days a week…

And eventually it went on hiatus.

I’ve pulled it out of hiatus a few times since then. And now, since the advent of MailChimp’s MC Snap iPhone app, and since I’m in a “doodle every morning” practice, the ArtSpark is BACK!

I don’t even have to boot up my computer to send a new issue.

If you haven’t subscribed, click here to get new art in your inbox. Not necessarily every single day, but most days (at the moment). When I rotate the pots on my passion pluralite stovetop the ArtSpark may slow down and/or go on hiatus again, but for now it’s publishing just about every day.

Recently I re-launched my signature mini-course, Creative Sandbox 101. I was happy with my conversion rate (the percentage of people who signed up), but I sent an email to everyone who didn’t purchase CS101, because I was curious what went into people’s decisions not to buy.

The response to that email has been HUGE. Almost half of my subscribers opened the email (that’s the power of a grabby subject line!), and over 100 sent me a personal reply via email.

(And yes, I sent a personal thank you email back to all of them. Because that’s how I roll. 🙂 )

The responses have been very illuminating. I wasn’t the least surprised that most people said that time/overwhelm, or a schedule conflict was their biggest obstacle, and that the next most common obstacle was money. These are the default reasons everyone gives, but in truth time and money are never the real issue; the real issue is priorities.

But analyzing my launch is not the real purpose of this post, which is how I turned a nasty barb into gold.

A lot of emails have been very encouraging and positive, too, sharing how much they love my writing, my podcast, etc.

Then this note landed in my inbox:

Because you haven’t ever seen you follow through with any of your big plans. I can’t possibly use you as a mentor.

[I think she meant to say, “Because I haven’t ever seen you…”]

That was my first response. I could feel myself flush with shame.

She nailed me right in a core fear: that I’m a loser who never follows through.

Thankfully, though, I’ve done enough work on dealing with criticism that I did not get stuck there!

First, I asked myself if this was true–is it true that I’ve never followed through on big plans?

The truth is that there is at least one big plan that I have not followed through on: writing my book.

But there are LOTS of big plans that I HAVE followed through on:

And that’s just off the top of my head.

Then I got curious.

Was this woman on the mailing list for my book? Years ago I started a newsletter to keep people apprised of my progress on the book, and I was curious if that was what she was thinking about.

So I did a search in my gmail inbox, and found another email from the same woman, which landed in my box after I’d given a free webinar before the last session of the Academy program I used to offer.

In that email, she wrote:

I was unable to make the live call because of the time – 6:00 – 7:15 EST is just not convenient. However, I did listen to your Intro, and Melissa, your style is just not mine. There wasn’t a lot of substance in what you had to say, and I think I was looking for something concrete.

Wow! I had forgotten about that email!

It really stung at the time. THIS time, though, it sort of made me feel good to find it.

Because those two emails together create context. This woman is so clearly NOT my Right People, that I can file anything she has to say in the “Not Worth Getting Upset Over” file.

I can LEARN from her barbs — I DO have a tendency to get super-excited about big plans, and then share them way too early, before I’m truly ready to commit to them, and this is something I’m working on.

But her OPINIONS are not worth paying attention to, because she is not “in the arena,” as Brené Brown would say, AND she is so clearly NOT my Right People!

I have no idea why this woman was still on my mailing list (and I’ve since removed her), except to be a Negative Nelly.

The upshot of this story is that using the tools for dealing with criticism REALLY WORKS. I wanted to share this story as a sort of case study.

The more visible we get, the more feedback we’ll get — both positive and negative.

The answer is not to stay hidden!

The answer is to learn how to manage those negative barbs so they don’t make you bleed to death.

Resources from this Episode