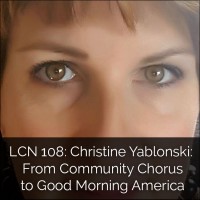 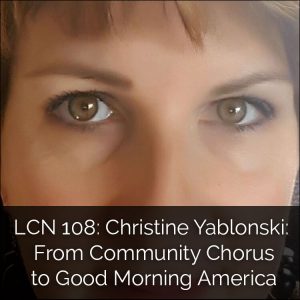 “I learned how to control my fears and my jitters from my experience with the community chorus.”

Back in 2000, Christine Yablonski moved to a new community and joined a community choral group. Little did she know at the time that this experience would end up changing her life.

The confidence that Christine developed from performing with that group helped her volunteer for a live-action role-playing camp, where she ultimately became a director and head of HR.

At the same time, she and her husband began unschooling their kids, and this led to the opportunity to be on Good Morning America. But… the editors had a biased point of view they wanted to get across, and the footage was edited to make Christine and her husband look pretty goofy.

But the next day they had a chance to be on camera again, this time live with George Stephanopoulos, and then later that afternoon with Joy Behar! Both of these went over very well — so well, in fact, that Christine went on to be an advocate and public speaker for the next few years.

And it all started with that community choral group back in 2000.

As Christine says, “I learned how to control my fears and my jitters from my experience with the community chorus.”

Christine Yablonski and her husband had both.

She tells the whole story on the podcast, and it is fascinating. And again, she credits her ability to be articulate and poised in this high-stress, high-pressure situation as having its roots in that community choral group.

(And it happens to be what led to my own Creative Sandbox Community. There’s never going to be a better time to join, because prices are going up soon.)

“I get out of my own way and just let the art guide me.” 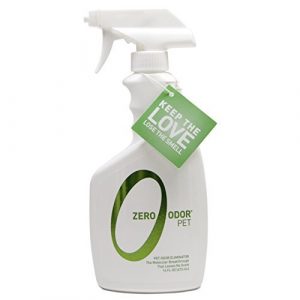 This week’s Something Cool is Zero Odor® spray, which if you have cats who use a litter box inside, this will change your life.

Actually, I use this stuff in combination with the Litter Genie®, which I guess is similar to a Diaper Genie®, but I’ve never had kids, so never had to deal with diapers.

But I do have an indoor kitty, and litter box smell is a big problem, especially since it is in the bathroom right off my studio, which is basically where I am all. The. Time.

But now I spray the litter with Zero Odor, scoop the litter waste into the Litter Genie, which seals all the smelly stuff away.

And we also keep a bottle of Zero Odor in the master bathroom, and a little one in the powder room. This stuff is amazing — it doesn’t just mask the smell, it makes it disappear.

Now I have to confess, it took me awhile to get used to it, because it does have a tracer scent, which is NOT perfume, but it’s an added scent that doesn’t last very long, but they add it so that you know you’ve sprayed the stuff, because otherwise you might not remember. Because Zero Odor literally bonds to the smelly molecules and somehow makes them not smell anymore.

You do have to spray more than one spritz for it to work. My husband was unclear on the concept, and thought one spritz was going to do it. Nope. You need like ten good, strong sprays. But it really works!

The image shown here is Zero Odor Pet, but I really don’t think there’s any difference.

Now, to save money, and plastic, I actually buy the 128-ounce commercial strength bottle and use it, a little watered down, to refill my smaller spray bottles.

So Zero Odor is today’s Something Cool.

Mentioned in this Episode

Life is a Verb Camp