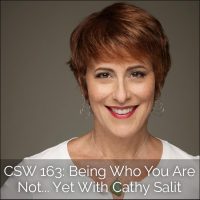 163: Being Who You Are Not… Yet With Cathy SalitMelissa Dinwiddie 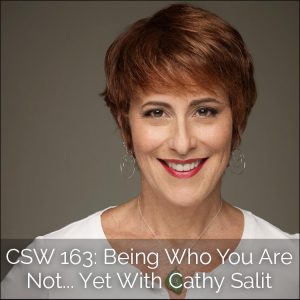 Cathy Salit’s business, Performance of a Lifetime (PoaL), helps businesses, leaders, and teams with the human side of strategy. In other words, they help the human beings that are carrying out the strategy of the business, using the art and science of theater and improvisation, combined with performative psychology, to help people perform who they are not yet.

Cathy started singing professionally when she was about 15 or 16. Then in the early 90s, she was invited to be part of an improvisation troupe. Cathy didn’t think she was funny at this point in her life, but she joined the troupe and learned to improvise.

She also did a lot of left-progressive theater, and was a community organizer, primarily in poor communities, where there was nothing for young people to do. Cathy was one of a group of people who helped put on talent shows, and the All-Stars Project is a $10M project, of which the talent shows are just one part.

Cathy had also been very interested in how people learn and grow, especially the emotional/emotive side of learning and development. For most people, in order to learn logic, you have to overcome emotional barriers.

Performance of a Lifetime started as a way to give non-professionals an opportunity to experience performance and improvisation. It was a four-week class where each participant got to “perform their life” in one minute, however they wanted: a mime, a dance, a song with a ukulele, always followed by thunderous applause from the audience. Then, after each one-minute story was performed, the director/teachers helped each creator perform a 45-to-60-second  sequel.

This class was one of the most profound performance experiences Cathy had ever witnessed. And it led to more.

But to make ends meet, the Performance of a Lifetime team added other classes — improv, acting, tap dance… Whatever they could think of.

Until about a year and a half in, when they were struggling to pay the rent, one of Cathy’s students — a professional business woman — asked her to do a workshop for her team at work.

Cathy’s initial reaction was “f### no!” But eventually the money won out. $1500 in 1998 dollars was too tempting, even though Cathy knew nothing about working in a corporate setting, she went for it.

Not long afterwards, another student, a medical doctor, asked Cathy’s team to co-create the communications training for the medical residents at Long Island College Hospital. This led to several years of work, and the hospital’s customer satisfaction ratings went from dismal to some of the highest in the city.

Before long, Performance of a Lifetime shifted its focus from personal growth to business outcomes, and keeping the lights on was no longer the same problem that it used to be.

PoaL has been an Inc. 5000 Fastest Growing Company for three consecutive years! Cathy shared that this impressive designation is something a company applies for. As in, there’s an application one fills out and submits!

It also didn’t hurt that PoaL had shrunk during the economic downturn to under $500,000 (from $2.5M previously), so when things picked up after the downturn, the growth curve was steep.

Social Mission from the Start

But Cathy notes that, even when the company shrank, they have always given money off the top to support social mission projects — like the All-Stars Project— in particular that use creativity and the arts and performance to create change both on an individual and a community level. Cathy would like to think that this perspective contributes to their desire to hang in there, because they have responsibility to make the business work, not just for themselves.

They (the three partners) made the decision to learn how to scale. Instead of taking all the gigs themselves, they would bring in independent trainers, so that the partners could continue the work of selling and “building their bench,” cultivating relationships, and better understand what it is that they do.

The Road to a Book Deal

Cathy met NYT best-selling author Dan Pink in person at a conference in Switzerland, and managed to “get herself invited” to a dinner with him, to which she “had no business” getting herself invited.

How did she did it? By reminding herself that, “It’s not about me — there’s a reason I’m doing this that’s bigger than myself.”

Dan Pink was in the middle of working on his book, To Sell Is Human (aff link — or click here for a non-affiliate link), and during a conversation with him, Cathy shared that, “What an improviser does is take anything and everything that anyone does and relate to it as an offer.” She was able to clearly  important for salespeople.

This led to a chapter in To Sell Is Human, which led to Cathy being approached by several literary agents, who each asked if she had thought about writing a book.

The process of writing her book, Performance Breakthrough: A Radical Approach to Success at Work (aff link — or click here for a non-affiliate link), led to sharpening of her thinking about what PoaL does, and to clarification of the Becoming Principle®: being who you are and who you are not, which helps you become who you want to be.

This, combined with the commitment to scaling, catapuled PoaL into another level of company, and double-digit growth.

For many years Cathy sang professionally, and she never stopped loving to sing. Her partner is a jazz trombone player, and it’s through him that she’s been sitting in and singing, performing “a little bit” in clubs. In New York, jazz musicians don’t rehearse, though!

She also went on a week-long singing retreat with Bobby McFerrin, Rhiannon, and other teachers, at the Omega Institute. All she did was learn and sing and listen, which was heavenly.

AND she’s started to integrate some circle singing in some of her programs.

Listen to the episode for more!

Cathy Salit is an author, speaker, executive coach, performer, and CEO of Performance of a Lifetime (an Inc 5000 Fastest Growing Company for three consecutive years), where she consults and trains leaders and teams at companies like American Express, Time Warner, Nike, Twitter, and Unilever.

At age 13, she dropped out of eighth grade and started an alternative school in an abandoned storefront in New York City; since then, Cathy has dedicated her life to creating learning and development environments that challenge the status quo and help people and organizations to succeed and thrive. She’s the author of the acclaimed book Performance Breakthrough: A Radical Approach to Success at Work; her work has been featured in the Harvard Business Review, Forbes, Fast Company, and The Wall Street Journal; and she writes a weekly column for Inc.com. Cathy performs musical improv comedy at the award winning Castillo Theater in New York City, and sings jazz and blues on any stage she can find…or create.

A gathering of international performance activists, that happens every other year in September in NYC. They are all using performance in various ways to impact the community and create social change.

My recipe for vegan arugula/spinach pesto, adapted from The Pink Ribbon Diet: A Revolutionary New Weight Loss Plan to Lower Your Breast Cancer Risk (aff link – or click here for a non-affiliate link)

1 package fresh arugula or baby spinach, or a combination (about 4-5 cups)

Combine all ingredients in a food processor fitted with a steel blade and process until well blended. You may need to start with half the greens, then scrape down the sides and add the rest of the greens. (Note: the original recipe calls for heating the garlic in the olive oil until golden before blending all the ingredients, but I’m too lazy to do that step.)

Has the Creative Sandbox Way™ podcast made a difference in your life? Would you like to be featured on the podcast?

I love sharing listener stories, so if you have a story of how listening to the podcast has changed your life for the better in some way — big or small — I want to feature you in a Listener Spotlight.

2. Then copy and paste what you wrote in your review into an email, and send it to me, along with why you want to be featured in a Listener Spotlight, and how the podcast has made a difference in your life. You can email me at creativesandboxway.com/contact.