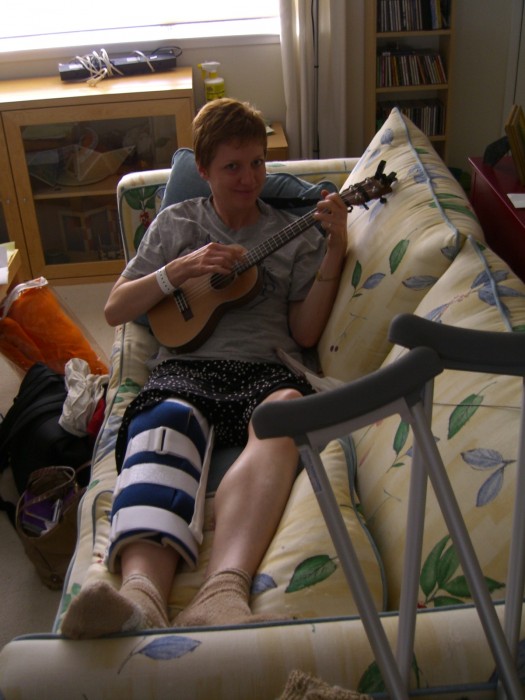 Spending 3 hours in the ER with a dislocated kneecap was not how I planned for this morning to go.

No, it was supposed to be a triumphant day at the To Life Jewish Cultural Street Festival, showing – and ideally selling – gobs of new art, prints and cards.

Apparently the Universe had other ideas.

A pain in the butt

If you’ve ever exhibited at a street festival or open studio, you know how much work goes into it. To put it bluntly, it’s a pain in the butt.

Much as I enjoy interacting with the attendees (hell, it never sucks to have people rave about my work), with primarily wedding-related art to display (ketubot and invitations), I’ve never had enough inventory of  “ready-to-buy” stuff to make the considerable time and energy investment pay off financially.

In fact, my mantra for the past decade of doing the fair has been “I’m never doing this %$*@#%& street fair again!”

The thing is, several years back the festival organizers held a competition to design the logo for the fair, and I won. And though they hadn’t planned on any compensation for the winner (exploiting artists being so ubiquitous that even directors of non-profits assume it’s standard operating procedure), I negotiated annual free booth space. Plus a yearly license fee to use my design on T-shirts, etc. (A fact of which I am still particularly proud.)

And since the space was free, I kept going back, hoping that this year might be different from the last.

It never was, but this time, 2010, I was hopeful it really might be different.

I had some good reasons for my hopefulness:

Until 7:03 this morning, I was on track to have the best street fair exhibit ever.

The Universe throws a monkey wrench

Then I slipped while stepping over the rim of the tub after my shower, and the next thing I knew, my kneecap decided it wanted to try hanging out on the side of my leg for a change.

In case you were wondering, this is not good.

In a split-second, the trajectory of my day took a sharp detour.

I won’t tell you about the EMTs and paramedics who managed to get me down the stairs and into the ambulance (the morphine might have helped).

I won’t tell you about waiting three hours for the doctors to pop the kneecap back in place (after the first set of x-rays, mind you). Or how surprisingly easily the kneecap slid back (if I’d only straightened my leg all the way in the bathroom, could I have avoided all this mishegas?)

I won’t tell you about my schizophrenic ER neighbor, who kept “hearing” her daughter in the next room.

I won’t tell you about the river of tears of pain, and how it mingled with the river of tears of frustration that I’d done 95% of the hard part of the street festival, and would be getting none of the payoff: no “oohs” and “ahhs” over my art, no sales, no orders, no new names on my mailing lists.

(And did I mention that they changed logos this year, so I actually had to pay $200 for the booth space I never got to use?)

Instead I’ll just tell you that I’m putting more and more art up on this site, and I’d very much like to find good homes for all of it. I will soon be installing a shopping cart, but in the meantime, an email or phone call is all it takes to get a lovely piece of art wending its way straight to you.

And now the question is, was today’s misadventure a final notice from the Universe that it’s really time to say “farewell” to the To Life festival? Is it an indication that it’s time to put all of my energies into showing my work online, and just give up entirely on 3D/”real world” shows?

The Vicodin may be affecting my thinking, and I guess I don’t have to make a decision one way or another right now. But it’s sure feeling that way at the moment.