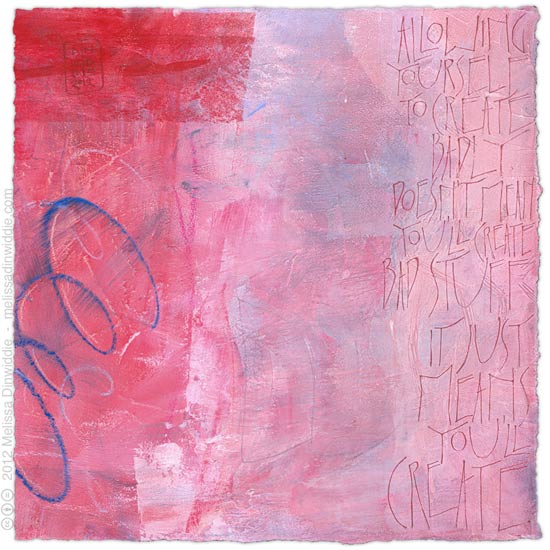 A couple of times a year I co-host a series of live, streaming video chats on how to change the game for artists, with Cory Huff, my business partner over at ArtEmpowers.Me and the Creative Insurgents podcast.

These public conversations are part of our mission to help bust the “starving artist” mindset, and a fun way to spread the word about our online course and community for artists at the beginning stages of building an art business, ArtEmpowers.Me.

In one of these video chats, Cory details the five things every artist needs to sell their art online, starting with #1:

Meanwhile, over here at Living A Creative Life, I talk a lot about the importance of allowing yourself to make crap.

Those two things may sound mutually exclusive. If you’ve been scratching your head about how to integrate making great art with making crap, you’re not alone!

Just the other day, I got this question from Sandy:

I read your comment about just making *crap* daily… But… Both you and Cory say to make great art in the podcasts I’ve listened to. How do you get from crap to great? 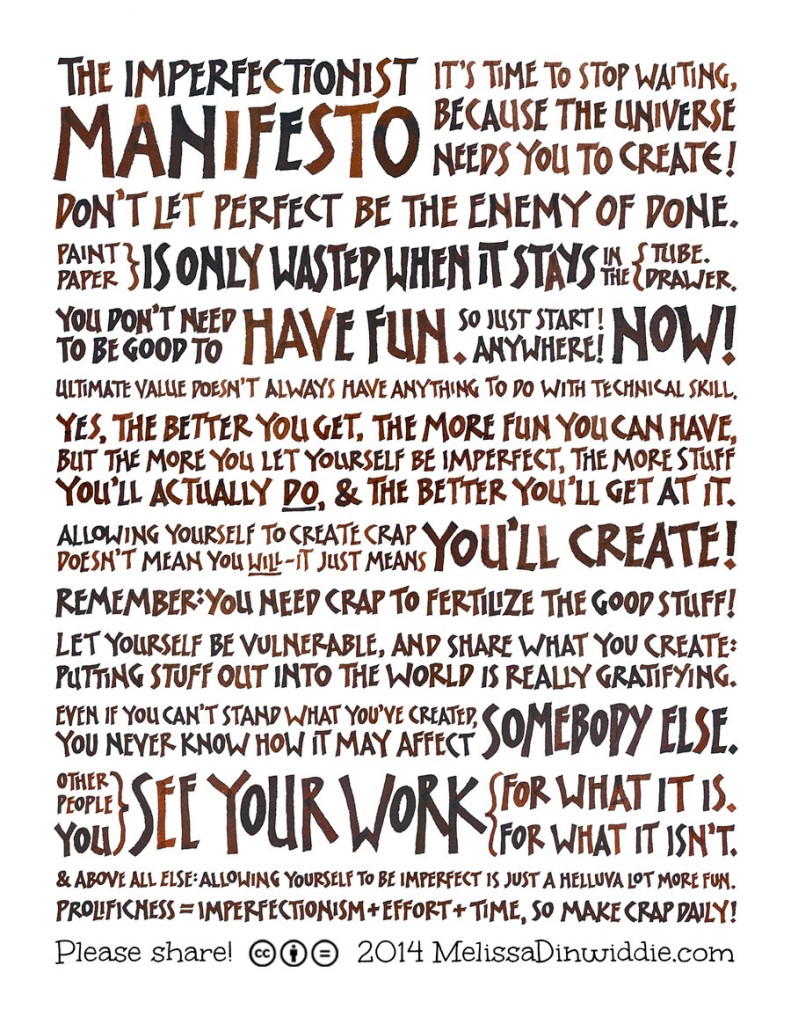 At the bottom of my Imperfectionist Manifesto poster, it says quite blatantly, “Make crap daily!”

Yet as creators, of course we don’t want to make crappy stuff! We want to make amazing stuff, excellent stuff, remarkable stuff!

Well, here’s the thing. I don’t know about you, but whenever I set a goal of making something brilliant, I choke.

As in total paralysis choke.

How many calls for entry did I glance at longingly over the years, but never enter, because the second I’d start to try to make something for it, I’d give up in despair, convinced that whatever I’d make couldn’t possibly be good enough?

In fact, for more than a decade I never made any art at all unless it was commissioned by a client (in which case I “had” to make it), or in the safe, removed bubble of the annual retreat I went to with my calligraphy guild.

(Speaking of retreats, I’m hosting my own Create & Incubate Retreat in a couple of months, May 23-26, and there’s still room to join me.

I was paralyzed by perfectionism, convinced that nothing I might make could ever be good enough to warrant even starting.

Oh, it was painful.

Before I even picked up a calligraphy pen or paintbrush, back in 1994, I decided I wanted to be a writer. I checked out books on writing from the library. I researched how to get published.

But when I sat down to write, I froze.

All I seemed capable of producing was crap. I’d peck out a sentence on the keyboard of my Mac Plus, then immediately delete it again, convinced I was hopeless.

Eventually, I gave up entirely. I didn’t write for fifteen years, because why bother, when you’re not any good? (It didn’t occur to me at the time that writing might be a skill I could learn to get better at by doing it.)

What finally got me out of this trap was, quite simply, imperfectionism: allowing myself to create what I was convinced must surely be crap, and creating it anyway.

Now it should be said that the crap I was producing in my attempts at greatness may not have been labeled as such by others.

As a creator, though, there is always a gap between what you want to create, and what you’re actually capable of creating.

Naturally this gap is widest when you’re a beginner, but it never goes away. As you gain skills you also gain an increased sensitivity to what’s possible, and to where you don’t match up. The internal critic is never truly satisfied.

If we let the internal critic drive the bus, we’d stay permanently stalled, and never leave the station!

And since that internal critic is also never going away, the best we can do is to distract or disarm it, and one way of doing that is to intentionally lower expectations.

If the critic knows you’re not aiming for the moon, it’s more likely to go to sleep for awhile.

Here’s the irony: play and experimentation were what got me into art in the first place, back in 1995, but over the years what started as my “fun thing” became so poisoned with the expectations that everything I created must live up to my potential for greatness that it seemed less painful to just give up creating altogether.

(Of course, in the long run, starving myself of my creativity was perhaps the most painful thing I could possibly have done, but hey, I’m not saying my choking was a rational response!)

In order to get back to creating, I had to first create a new atmosphere for myself, one of safety, permission, self-compassion, and greatly lowered expectations. When I let go of my ridiculous expectations of Immediate Greatness, it gave me the freedom to experiment, to try things, to play again, for goodness sake!

In order to help me let go of those expectations and keep the internal critic and the self-doubt gremlins at bay, I designed a set of “rules” for myself, which ultimately led to my Keys to Creative Flow, and my Imperfectionist Manifesto. And I practiced allowing myself to make crap.

It’s important to note that “make crap daily” does not mean “do shoddy work.” It does mean to allow yourself to do the work, even if it feels in the moment like it couldn’t possibly be anything but shoddy.

It’s a bit like a Zen koan — hard to wrap your head around — but the fact is, the only thing that gets me (and so many of the students and clients I work with) to create at all is permission to make crap.

Now the time I spend at my drafting table I refer to as “making messes in the Creative Sandbox.” And often my pieces do start out quite literally as messes! Smearing paint around with my fingers, dribbling ink on paper or canvas with no agenda other than to see what it does.

(This, by the way, is in direct contradiction to my training as a calligrapher to be meticulous, exact, and precise, so it has taken practice to be okay with this new way of working!)

The editor still comes into the room at regular intervals, making suggestions and critiquing. Face it, I want to make pieces that please me. Of course I do!

At the same time, though, I endeavor to keep sending the editor away. I endeavor to reside as much as possible in the process, rather than focusing on the end product.

It’s impossible to do both at the same time, of course, but I attempt it anyway. This is the practice. This is what keeps me from freezing solidly back into perfectionist paralysis.

Imperfectionism — allowing myself the freedom to create crap — has led to my most prolific period in my entire life, and to work that I’m more excited by and proud of then I’ve ever created.

Yes, the ultimate goal may be to make great art, but the fastest route there is not always the most direct.

The thing is, when we allow ourselves to make crap, we create a lot more than if we wait until we’re “good enough.” When we create more, we get more practice at what we’re doing, and we get better at it!

In other words, it’s the crap that fertilizes the good stuff.

And what’s perhaps most important to remember is that allowing yourself to make crap doesn’t mean you will, it just means you’ll create!

Beginners have to start somewhere. You didn’t go from lying in your crib to walking like a champ in one step. First you had to stumble and bumble and practice your chubby little legs off, falling on your padded behind over and over again.

Imagine if your parents had held up the expectation of greatness-at-walking at twelve months old! Imagine what a miserable failure you’d have felt! You’d probably have decided to just stick with crawling forever, and forget this walking stuff altogether!

And yet this is what we do to ourselves as creators all the time.

I’m passionate about changing that pattern. It has been holding way too many of us back for way too long, starving ourselves of creative joy, and starving the world of the gifts of our creativity.

This is why my battle cry has become, “All hail imperfectionism! Imperfectionists unite!” And why one of my many mantras is now “make crap daily.”

To sum up, how do we get from crap to great? There is no other way — crap is the route to greatness! The only decision, really, is whether to beat yourself up for not being as good as you wish, and stay stuck in perfectionist paralysis; or to give yourself permission to be exactly where you are, while at the same time moving forward on the path toward your target.