Yes, I know much of the world is wrapped up in Christmas right now (no pun intended), but I’m getting married on Saturday (!), so naturally it’s All Wedding All The Time around here.

Except when it’s not…

The thing I do first is the thing that gets done.

In other words, if I don’t get to work on the ketubah (or whatever my big goal is) first thing (okay, after meditating and journaling, but..)

…before whatever appointment is on the calendar

…before baking cranberry bread for the pre- and post-wedding brunches

…before driving a carload of stuff to Goodwill (finally!)…

I may never get to it!

But deadlines are magical things, and with seventeen years under my belt as a professional ketubah artist, I’m used to completing artwork in time for someone’s wedding! It always takes longer than I think it will, but it always gets done.

I’ve been documenting my process (mostly using Instagram, which I’m kinda falling in love with), and thought it would be fun to share it here.

I should say that I did the heavy lifting (designing and copyfitting the layout of the text) a week or so ago. In radically reduced shorthand, the next steps are as follows:

2) Paint the paper on which the text will be calligraphed

3) Calligraph the text (which involves a lot of lettering trials, to see what looks best, what density the ink should be, etc.)

4) Collage/sew the calligraphed text paper onto the canvas

5) Add any final elements to the piece

With the layout done and printed onto plain old computer paper as a spacing guide for my calligraphy, it was time to paint the canvas. And oh, boy, “white page syndrome” was hitting me hard!

But I was determined to treat this as a Creative Sandbox project, and not get all precious and perfectionisty, dammit! So after priming the canvas with Daniel Smith watercolor ground (so I could use water media like ink and watercolor paint in addition to acrylic mediums), I broke the ice by “scribbling” all over the canvas using a ruling pen: 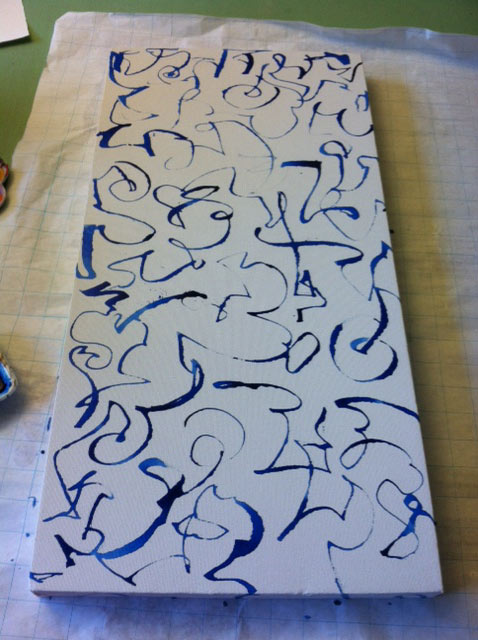 I kinda liked that, but knew I wanted a more layered, textural final effect, and that this was just the start. It served an important purpose, though: kinda like the first door ding on a brand new car, it let me relax and just start “making messes,” my preferred way to work.

Next I added a wash of Ziller blue ink, muted with a bit of walnut ink. And when a accidentally splashed a drop of water on the wet canvas, I intentionally added a bunch more water splats for texture: 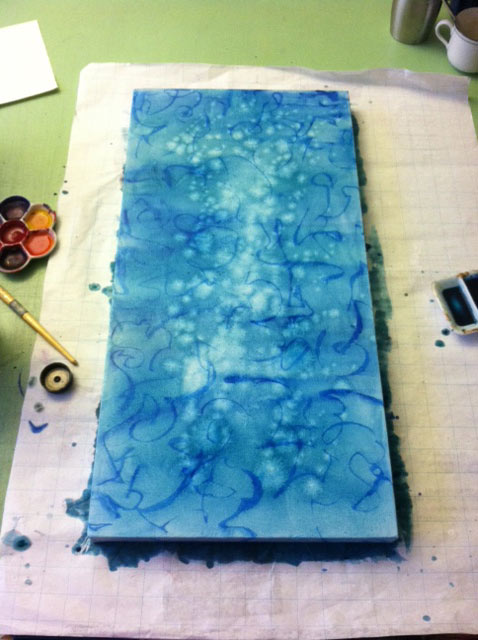 Then while the paint was still drying, I smeared some random smears of watercolor ground, using an old credit card: 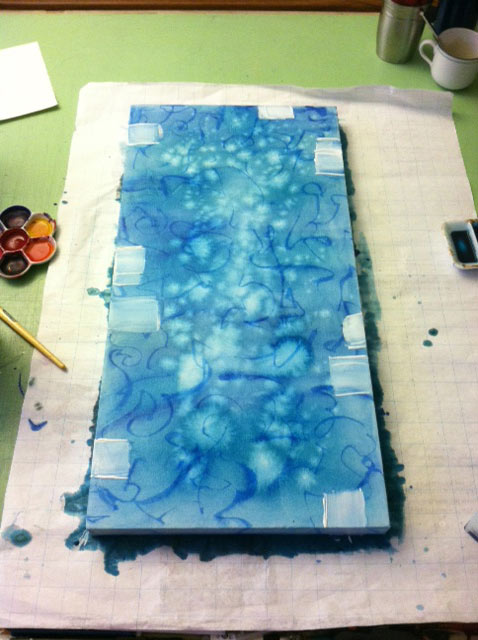 Then added some all-over pastel scribbles (very pale — hard to see here) and three pink pastel spirals (you can see evidence of my testing out different pastel colors on the paper underneath the canvas, at the bottom right): 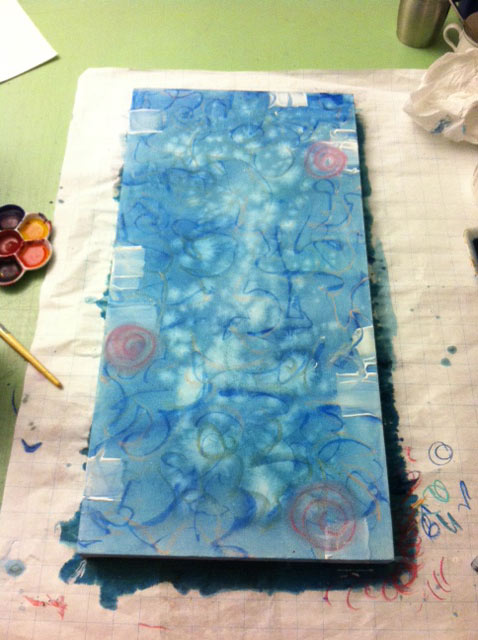 I sprayed SpectraFix over this (my favorite pastel fixative — no solvents!!!), and while that was still wet, I smeared the pink spirals with my finger: 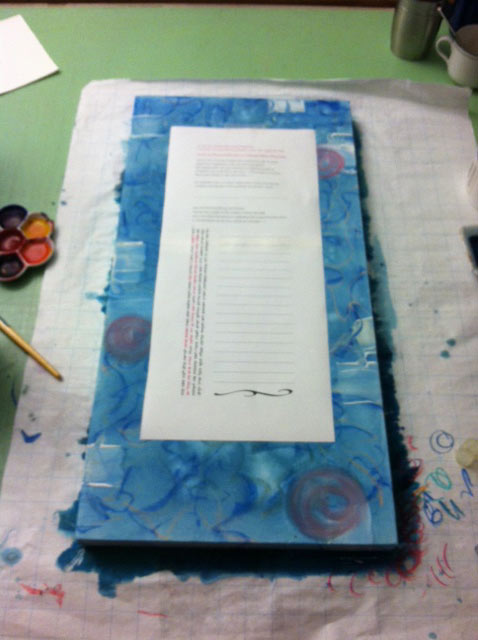 I felt the canvas was crying out for some spring green, so added some pastel scribbles around the borders: 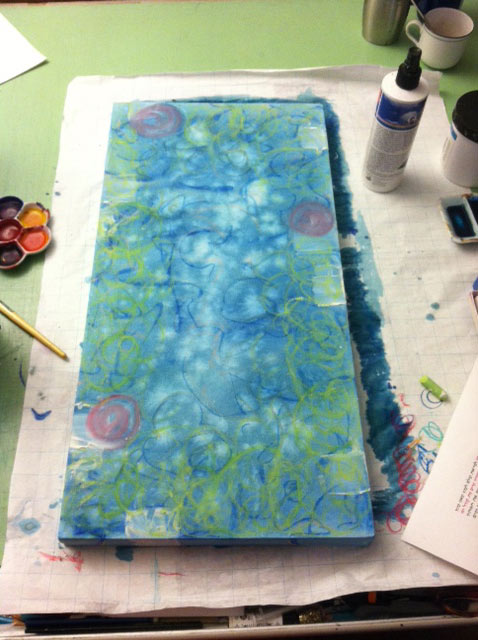 And when the watercolor ground smears got mushy from all that media, I refreshed them, again using a credit card: 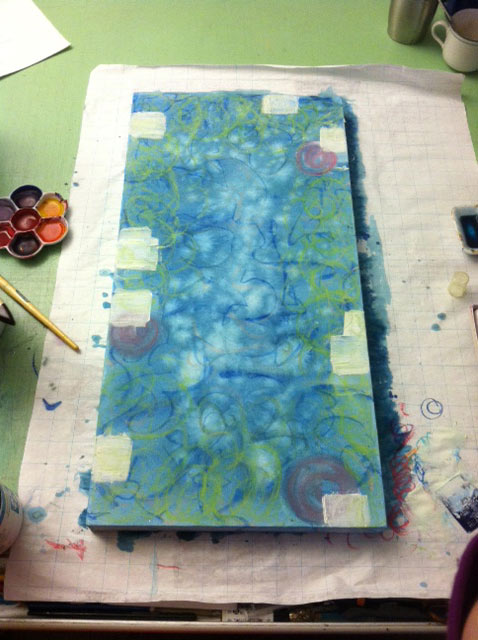 I liked what was happening here, but felt the borders needed stronger emphasis, so went around with a large flat brush and blue Ziller ink (again, somewhat “contaminated” with walnut ink, and perhaps a drop or two of green Ziller — I can’t remember now…). This pic shows the printed template for the text and signature lines on top of the canvas: 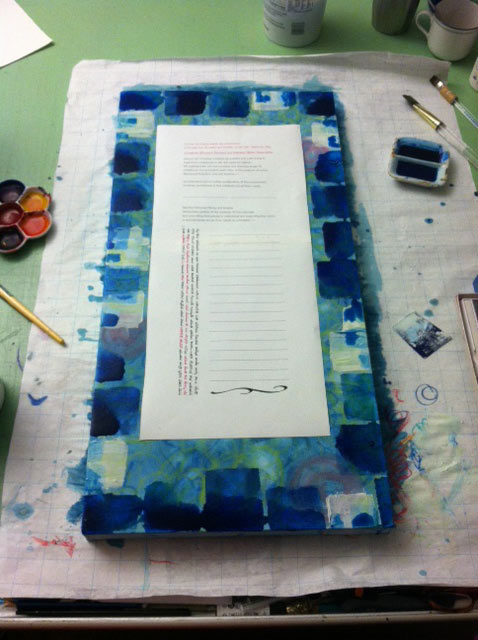 As you can see, I was getting my hands dirty for real! 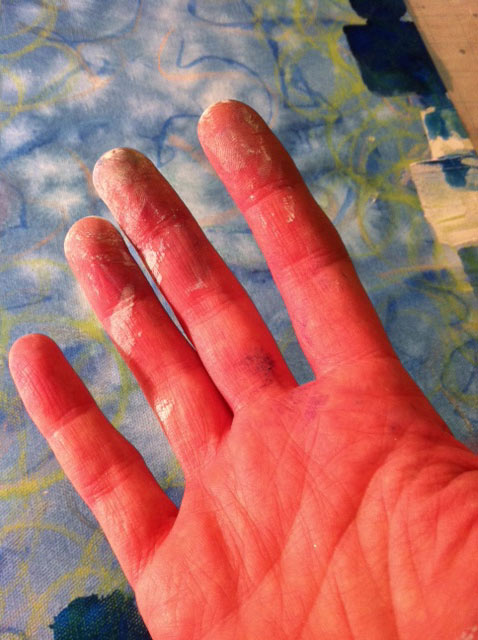 And here’s a pic of the canvas, sans text template (the moiré effect at the bottom is courtesy of my phone and the lights, and not part of the actual canvas): 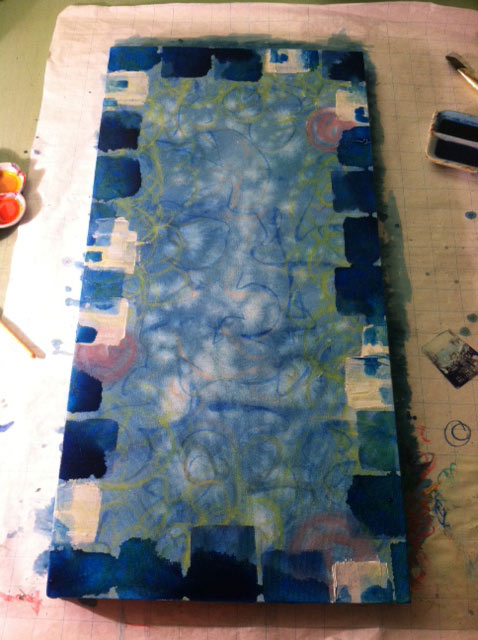 At this point, although I knew I’d probably add more layers to the canvas, I decided to turn my attention to the paper on which I’d be doing the calligraphy. I wanted it to be a blue-green that complemented the canvas.  So I stretched a full sheet of Arches 140# hot press watercolor paper, and went to town (sorry, no process pics here — I forgot to shoot them! This pic shows after several layers of paint already.)

Now I ran into my first big technical glitch: this batch of Arches creates a splotchy effect when wetted. Certain spots in the paper absorb more pigment, making it appear as if the paper is mildewed or something! 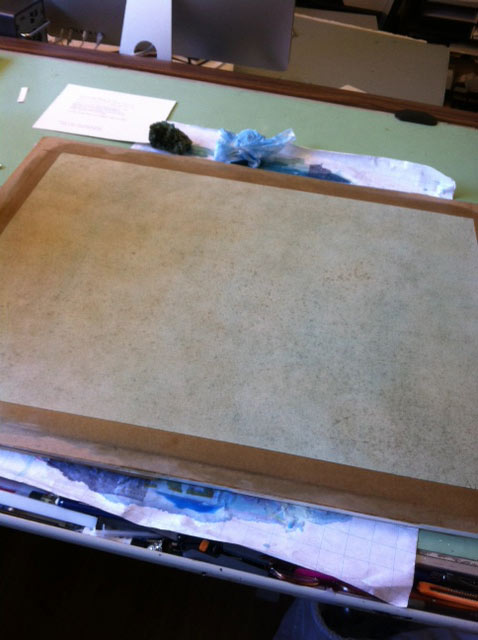 I was very unhappy about this splotchiness, plus the color was turning too green/brown for my taste, so I decided to stretch a half sheet of a new sheet of paper, this time on my Boga Board.

Here I am blowing it dry, after several light washes of Ziller + walnut ink, and liberal scraping with an aquarelle watercolor brush handle (for texture, but really because I’d inadvertently added one or two scratches, and if you haven’t figured out by now, my favorite method for dealing with “mistakes” is to feature them): 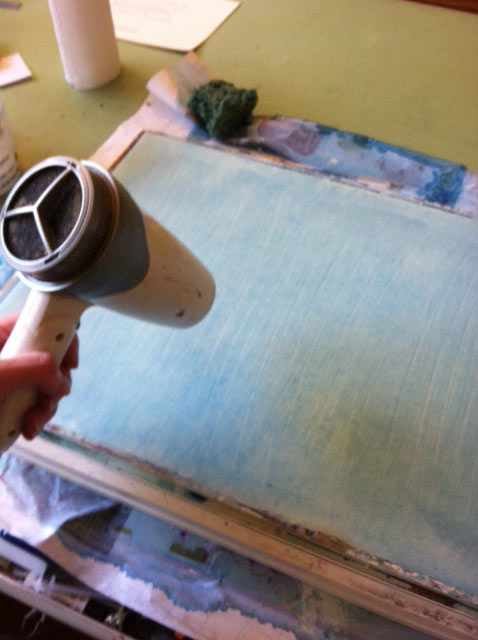 Unfortunately, I didn’t realize until I’d already wet the paper that the sheet was not Arches, as I’d asumed, but Fabriano Uno. Uh, oh…

I had a Very Bad Experience with Fabriano Uno several years ago, when I decided to try it out for a client’s ketubah.

Bad Move. Never use a paper you’re not familiar with for a client piece, especially when the deadline is fast approaching!

In that particular case, a watercolor tree design, I did the painting before the calligraphy, which is reverse of my usual method — normally I do the lettering first, and add any painting/artwork afterwards. But I was very nervous about this painting, and was afraid of sinking several hours into the calligraphy, only to ruin the piece went I went to paint, and have to start over again.

So the painting was done, and then I made an error in the calligraphy —  right in the groom’s Hebrew name, in fact.

Normally this is not nearly as big a deal as it sounds — I almost always make at least one mistake in a big ketubah text. With Arches it’s a fairly simple (albeit slow and tedious) process to carefully scrape off the ink with a scalpel, then burnish the paper down and treat it with gum sandarac to prevent bleeding when you write on it again. I’d done this procedure dozens of times, and it always went off without a hitch.

Not with the Fabriano Uno, however. When I went to write on the “fixed” paper, I might as well have been writing on tissue paper, it bled so badly!

I think I tried at least two more times, and each time it bled worse. Now I was in danger of scraping right through the paper, and I still hadn’t fixed the error!

And did I mention that the clients were picking the piece up the next day?

Ultimately, I was able to solve the problem by outlining both bride’s and groom’s names in gold ink, so they appeared to be floating on a gold field. It’s a common tradition to make the first instance of the bride’s and groom’s names extra decorative, so it wasn’t out of place for me to do this. I then added some gold dots as decoration on their English names, to balance out the piece.

Whew… Crisis averted! And the clients were happy.

But back to my own ketubah. After the washes were dry on the Fabriano, I tested some lettering, and guess what? It bled.

So back to the drawing board. I pulled the Fabriano out of the Boga Board (there may have been some swearing involved…) and stretched a third sheet — this time my tried and true Arches again.

Here it is, stretched and ready to paint, with the text layout template on top: 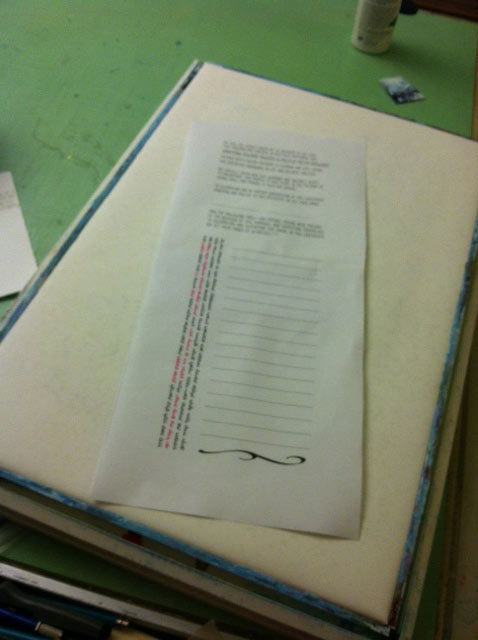 Unfortunately, this sheet had the same splotchy problem as the full sheet I’d started with (you can see it looks a little mottled, even without any paint on it.)

But I decided to see what would happen anyway. Here it is with a wash of the same Ziller ink + a bit of walnut ink blend, angled slightly to allow the paint to pool at the bottom (and you can see by the dark pool in the upper left of this photo that I didn’t do a fabulous job of stretching…)

And another pic, from a different angle:

After much blotting with paper towels, and re-applying of washes using a natural sponge (see 15 second videos here and here), my fingernails and cuticles were blue! Even after using my favorite barrier cream, Gloves In A Bottle (highly recommended, both as a barrier cream, and as a kickass moisturizer)! 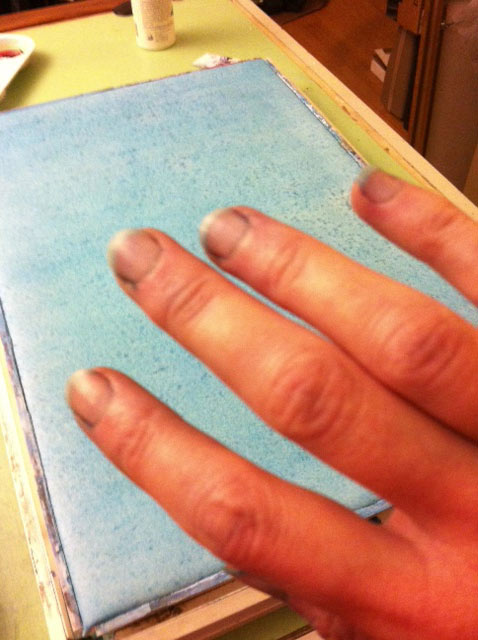 Thank goodness there were still a few days before the wedding, for the blue to wear off! 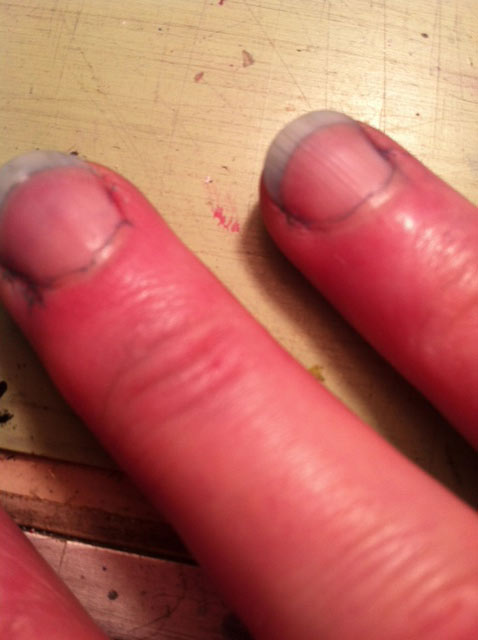 And now I had a background I was fairly happy with… even though I hadn’t planned on those %&@*# splotches!

However, given that the rest of the Arches paper was likely from the same, splotchy batch, I didn’t think it would buy me much to try yet again. So I decided to learn to love the splotches…

And when I did a quick lettering test on this third sheet, voilá, no bleeding!!! 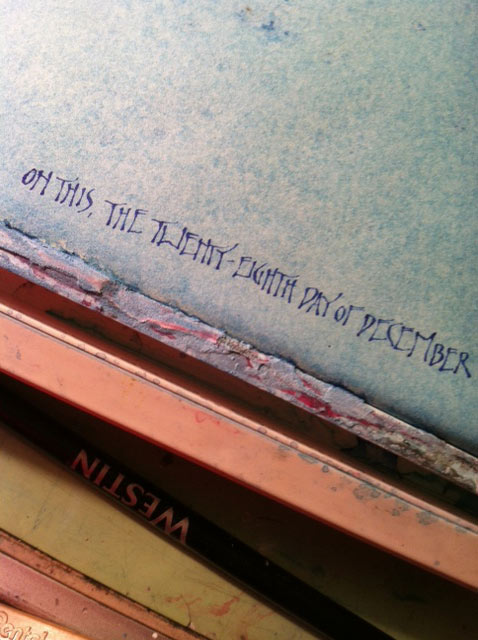 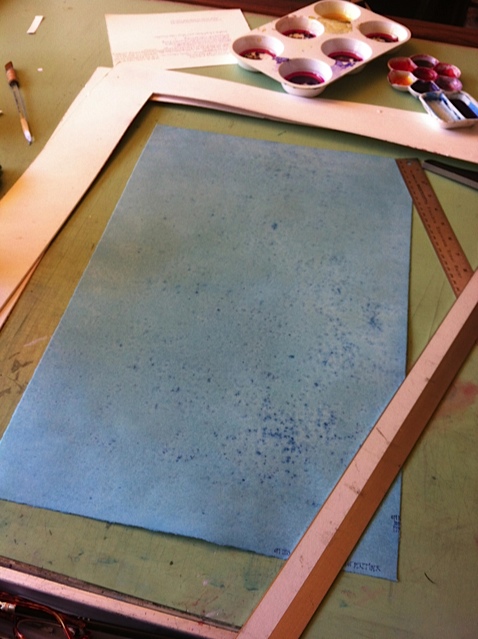 About to tear lengthwise, paper face-down on my drafting table: 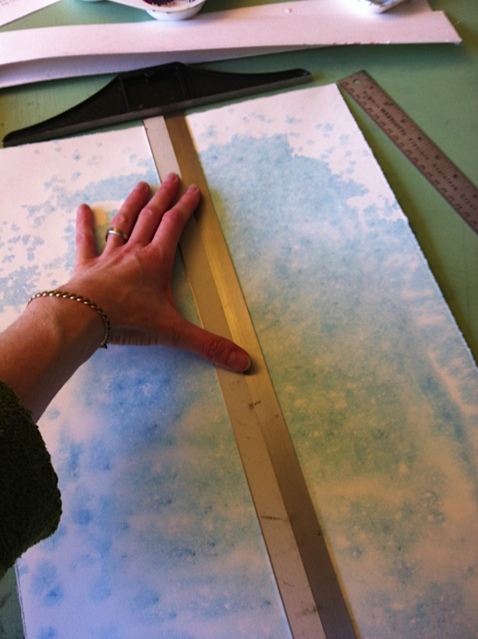 Hmph. It feels a little wide to me… 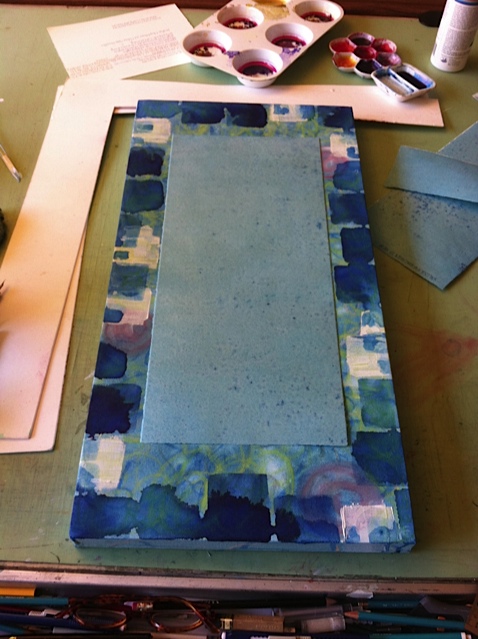 So I trimmed the printed template to give me a sense of how it would look 1/2″ narrower: 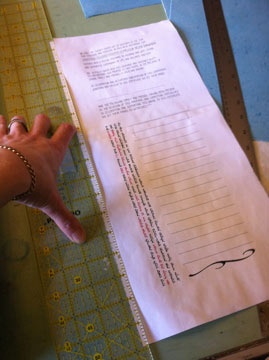 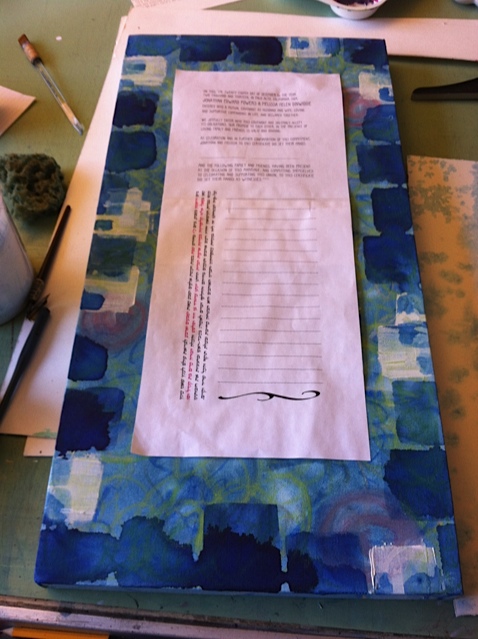 And yes, definitely better. I could have trimmed even more, but it’s virtually impossible to tear off less than 1/2″, so I’ll probably leave it be. (And I’m happy that the biggest and most annoying of the splotches was part of the torn-off area! Yes!) 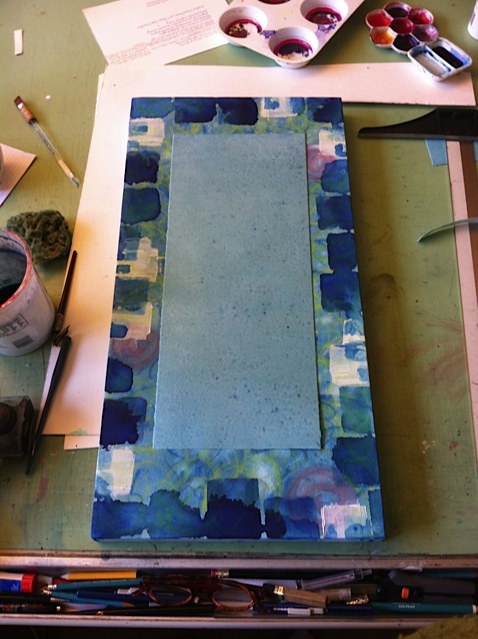 More test lettering on a piece of scrap, to try out ink densities, and confirm that this is the lettering style I want to use (very different, btw, from my original plan): 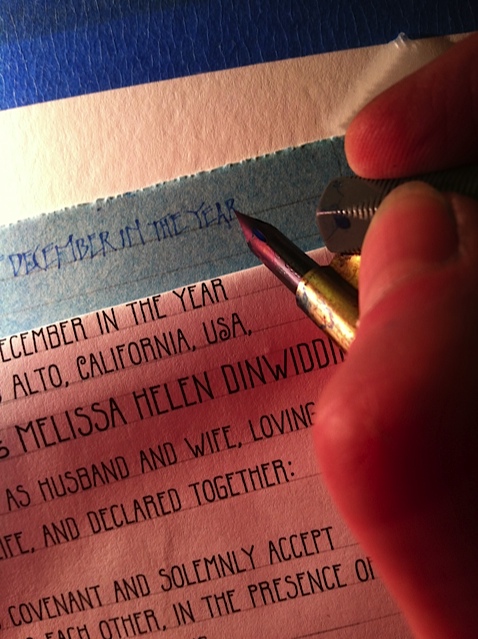 And erasing pencil lines to get a clearer sense of texture, ink density, etc: 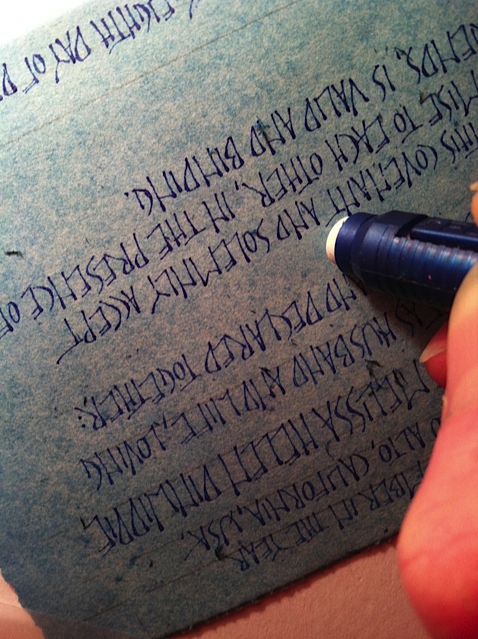 Here’s a pic with the lettering test swatch sitting on top of the “real” paper, on top of the canvas (the key and pen nib may or may not be incorporated into the final piece. We’ll see…): 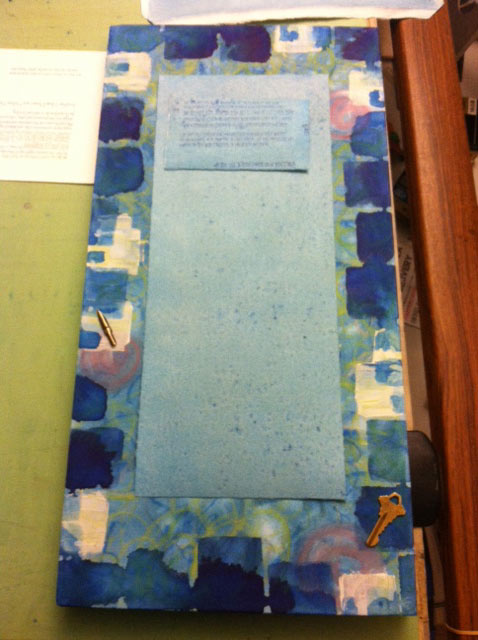 That’s where I am so far. And now back to work! Watch for more pics in another update…