I read a fair number of books each year, but it’s not always that I can say a book is truly transformative. 2012 was a rich year in that regard.

Last year I read such outstanding and highly regarded tomes as The Gifts of Imperfection and Daring Greatly, by (my hero extraordinaire) Brené Brown, Linchpin, by Seth Godin, Drive, by Daniel Pink, and a good chunk of Flow, the classic book on the psychology of optimal experience by Mihaly Csikszentmihalyi. (I confess I’ve yet to finish that one…)

Those are each excellent books, which I highly recommend (anything by Brené Brown especially!) But if I were to pick just three books that I read in 2012, which effected the most transformation in my own life, it would be the following: 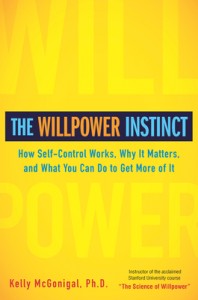 Kelly McGonigal’s book, based on her Stanford University course, The Science of Willpower, has dramatically changed the way I do, well, pretty much everything.

I am so in love with this book, in fact, that starting next week, I’m leading a reading circle inside my Creative Ignition Club, to work through the book again in a group, one chapter at a time. (Wanna join us? I really want other creatives to benefit from the lessons in this book, so I’m opening the clubhouse this week — come on in!)

I also signed up for The Science of Willpower class through Stanford Continuing Studies, to immerse myself more deeply in the subject, and learn about the latest research that has been done since the book was written. (The first class was last night, and it was great fun.)

You may think of willpower as “crunch down and power through,” which sounds about as appealing as slogging through a vat of oatmeal. But that’s not actually what McGonigal is talking about.

Willpower, as McGonigal defines it, is much more nuanced than that:

Willpower is the ability to choose what matters most [to you], even when it’s difficult, or some part of you wants to do something else.

In other words, it’s the ability to choose the “right thing,” even when that little “devil on your shoulder” is persuading you to choose the other thing:

To choose to work on your novel/painting/blog/work deadline instead of falling into a social media black hole, for example.

To pick the salad instead of the chocolate chip cookie.

To take a walk instead of lighting up a cigarette.

Get the picture? Self-control may sound like the purview of the uptight and righteous, but in fact it’s something we all need, just to get through the day, let alone to do our best work! And wouldn’t it be nice for those “right choices” to be easier?

What I love about The Willpower Instinct, is that it uses the latest in neuroscience (and some truly fascinating, engaging, and entertaining studies!) to offer up a plethora of small changes you can make in order to do just that: make it easier to make that right choice.

For example: did you know that sleep deprivation — for even a single night — dramatically decreases willpower?

And the reverse is true: getting good quality, adequate, consistent sleep amounts to good care for your brain that turns on your best self.

And did you know that even five or ten minutes of daily meditation can not just strengthen your willpower, but also increase the amount of sleep you get? A double-whammy willpower booster! (And btw, it was a small section in The Willpower Instinct that strengthened my resolve to keep up my nascent meditation practice, which has now become a fixture of my days.)

These two tips alone have been hugely helpful in my productivity, but that’s just a fraction of the good stuff inside The Willpower Instinct. Seriously, this book is the bomb.

Buy it, but take McGonigal’s advice and read it over time, a chapter per week. Better yet, read it with a group, like I’m doing inside the Creative Ignition Club starting next week. You can blast through the book in a weekend (like I did…), but there’s just too much material to fully absorb and process that way.

If you’re like me, you may need willpower to hold off on reading it, though. 😉 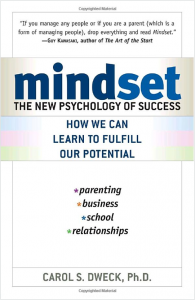 Hat tip to Tara Mohr for recommending this book, which finally explained, among other things, why I’ve struggled with perfectionism, why for many years I could never earn more than “just enough to get by,” and why I gave up writing for fifteen years.

Turns out there are two different mindsets or belief systems that people walk around with:

The fixed mindset — in which you believe that your intelligence, talents, skills, abilities and personality are inborn and nothing you can do will change them, or..

The growth mindset — in which you believe that your intelligence, talents, skills, abilities and personality are the result of your effort, and therefore changeable.

A simple thing, really, but with enormous implications for success, failure, and self-esteem in all areas of life.

It also turns out that praising children for their inborn “talent” or “intelligence” (as my parents and teachers did, with all good intentions) can have the very counterproductive result of making them resistant to trying anything where there’s any risk of failure. After all, if they fail, it would prove that they aren’t as talented or intelligent as they’ve been made out to be — better to just not try at all.

Oh. My. God. That pretty much describes a lot of my life.

Not in every area, for sure, otherwise I’d never have accomplished anything! One can have a fixed mindset in some areas of life and a growth mindset in others.

What’s really interesting is how, now that I understand the concept of fixed vs. growth mindsets, I have been discovering more areas in my life where I was unconsciously operating under a fixed mindset.

For years I thought my inability to earn more than “just enough to get by” was because I lacked the “moneymaking gene.”

The ability to earn a good income is a skill that can be learned. Some people may have more of an innate facility than others, but nobody is born knowing how to make money. We all have to learn it from somewhere. Once I realized that it was a fixed mindset — not some innate flaw or lack — that had been keeping me stuck, I changed my mindset and set out to learn!

Nope. You got it: fixed mindset.

The ability to write well is also a skill that can be learned. Again, some people may have more of an innate facility, but it’s the work of writing — including allowing oneself to write badly! — that turns one into a writer.

Dweck offers a plethora of examples of people operating with fixed and growth mindsets, from the worlds of art, sports, and business, proving that “native talent” is not ever the determining factor in a person’s ultimate success. And she offers suggestions for how to change your own mindset.

At 246 pages, this book packs a powerful punch. It might even change your life.

3. Spark: The Revolutionary New Science of Exercise and the Brain 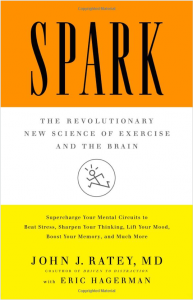 The tagline on the cover of this book is, “Supercharge Your Mental Circuits to Beat Stress, Sharpen Your Thinking, Lift Your Mood, Boost Your Memory, and Much More.”

“Really?” I thought. “Just with exercise?” But I kept stumbling across references to Ratey’s book, so rather reluctantly added it to my reading list. Then one of my most transformative reads from 2011, Uncertainty, by Jonathan Fields (highly recommended!), made reading Spark an imperative:

First, read [this book]. It will open your eyes to the importance of exercise in every aspect of your life as nothing you’ve read before has done. It will clarify the role exercise plays in preserving and even bolstering your ability to lean into uncertainty, fear, and anxiety as you strive to build something extraordinary.

That’s quite and endorsement, so I finally, rather dutifully placed my order on Amazon.

Within the first few pages I was captivated. And suddenly, after years of always-intending-but-never-quite-managing to “get more exercise,” I was making aerobic exercise a priority in my life!

Honestly, I was kind of stunned. As a former bulimic with a history of major body-image issues, I’d always thought that appearance would be my greatest motivator to get on the damn exercise bike (or treadmill, or outdoors, or whatever). I may be recovered from bulimia, but I’m still a more vain than I’d like to admit.

It turns out I care a lot more about my brain — my intelligence, my creativity, my longevity, my mood — than I care about my looks (which, I’ll admit, is kinda gratifying to know…) Ratey’s book offered me just the motivation I needed to get off my butt.

Have I exercised every single day since reading Spark? No. But I have gotten a decent dose of aerobic exercise (generally 30-45 minutes) more often than not since I’ve been keeping track.

Not every day, but most days.

Considering that the only exercise I was getting before reading Spark was yoga (granted, a pretty intense form of yoga) twice a week (on a good week), this is a dramatic change!

Is it what Ratey recommends as optimal? No, I still have a way’s to go, but hell, you’ve got to start somewhere! As I always say, baby steps, baby. And as an ex-boyfriend of mine liked to say, “better is better.”

This is definitely better.

I finally moved exercise higher up on my priorities because Ratey’s arguments were just too all-encompassing to ignore. Spark offers fascinating examples of the power of exercise to enhance learning; decrease stress, anxiety and depression; minimize attention deficit problems; help beat addiction; deal with hormone problems; and slow/reverse the aging process and dementia. The studies and examples he cites are mind boggling.

Wow! This is powerful stuff! It sure got me to transform my own life.

(Now if only I could get MB to read it…)

So that’s it. My three most transformative reads from 2012. If you’ve read any of them, what did you think? Did you find them transformative as well?

What were your most transformative reads last year?