Like to listen? Check out this podcast episode, inspired by this article.

Here’s an embarrassing fact about me: I’m a clutterbug.

This doesn’t mean I like clutter. In fact, quite the opposite — I vastly prefer being surrounded by order and spaciousness, but my whole life I’ve been better at accumulating than letting go.

I’m not a hoarder in the pathological sense — I’ve known a number of pathological hoarders in my life, and I don’t even come close, but I still have way more stuff than serves me.

Over the years, my cumulation of stuff was really weighing me down. Especially the studio, which was so crammed with cabinets and shelves and bins for storing my stuff that I could barely turn around.

All that clutter made it hard to think. It made me feel badly about myself, and it clogged my creative flow.

Mess, as I wrote in this article, is one thing — studies suggest that messy environments encourage originality and a search for novelty. Clutter, however, is something entirely different — it sucks the life out of everything.

Here are some (really embarrassing) pictures:

It may come as no surprise that, with this disaster area, I hated having anyone over.

When I was dating, I always dreaded the moment when a new date would see my studio for the first time. Their eyes would grow wide, and I just knew they saw me in a different light, and not a flattering one.

Accumulating stuff in my studio for twenty years led me to a sense of despair that I could ever unclutter. The task was so herculean, it didn’t feel possible.

All that changed last year.

No, I didn’t suddenly become a paragon of minimalist living, but last year I finally managed to transform my studio from a space that made me cringe and groan every time I walked through the door, to a space that makes me smile and say, “Ahh!”

Here are a couple of representational pics:

How did I make all this progress? What made 2014 different?

I’d had the goal of clearing out my studio for over a decade, but I’d never managed to make it happen before. So what changed?

I could tell you that the answer was a clarity of vision, and it’s true that this did play a part. I got really clear not just on what I wanted (a spacious, uncluttered studio), but why I wanted it: so that every day when I walk in the door, instead of feeling heavy, depressed, and hopeless, I would think, “Ahhhh,” and feel inspired to create.

But that’s really just a tiny fraction of the story. I’ve known virtually my entire life that I feel lighter, happier, and more productive when I’m surrounded by order, but that knowledge hadn’t gotten me to take much action in the past.

See, I knew that I could not do it alone.

I also knew that the people you surround yourself with have an enormous impact on your behavior.

In fact, researchers have concluded that willpower behaviors are essentially contagious.

Stanford psychologist Kelly McGonigal devotes a full chapter of her book, The Willpower Instinct (aff), to citing studies that show that “you can catch the desire to overspend or overeat from your friends­­—but you can also catch self-control from the right role models.”

It made sense to me that if I wanted to successfully tackle an enormous clutterbusting task, I’d be wise to surround myself with people who are making progress on their own clutter. I knew that seeing other people follow through on goals and commitments regarding their clutter would inspire and motivate me to do the same.

Plus, if I were on the hook to share my own progress — in other words, if I felt accountable to the group — I knew I’d be about seven thousand times more motivated.

The Great ClutterBust was my project for gathering the support I needed around me.

Thirty days of clearing clutter in the context of a loving, supportive group of other clutterbugs on their way to becoming clutterbusters. We were all in the same boat, which made it so much easier to share and be vulnerable, free from shame.

Each week there were multiple opportunities to meet up in a video conference room to check in and bust clutter together in real time. “Before” and “after” pictures, and inspiring stories of the masses of stuff cleared out flew all over our Facebook group.

We offered resources for what to do with all the stuff (one woman referred to the growing pile in her staging area as “Outbound Mountain”).

We acted as a sounding board for members to find their ability to let go of the stuff they wanted to release, but felt clingy about.

We gave each other the strength to keep at it when it got hard.

“Is it possible to over-rate calm and serenity? I’m beginning to think not!” wrote Denice.

“I feel like I can breathe again!” wrote several other people.

The sheer volume of stuff moved out of houses, garages, yards, and cars was astounding, and lives changed as a result.

My dream of walking into my studio and smiling came true. It was nothing short of miraculous.

You can’t force yourself to be ready to shed clutter, but when you are ready, the shedding process is a lot easier than you might think.

I got rid of a mind boggling amount of stuff last year, but it was just the first layer or two off the onion. My studio looks dramatically better than it used to, but there are so many deeper layers I didn’t even touch: File cabinets crammed with archives I’ll never use. Flat files overflowing with papers and posters and god knows what else — more than I could ever use in one lifetime.

Not to mention the rest of the house, which I barely touched last year.

I wasn’t ready to tackle these layers last year, and that’s okay. I did what I was ready to do, which was a lot.

It’s been a year since the last Great ClutterBust, though, and now I’m not only ready for the next layer; I’m chomping at the bit! I just read The Life-Changing Magic of Tidying Up (aff), by Marie Kondo, and it feels like something switched in my brain, like the resistance I’ve felt to releasing the next layer has loosened.

I wasn’t sure if it was possible, but now I’m thinking that this next Great ClutterBust may be even more epic than the last one…

With the power of the community on my side, herculean tasks become not just doable, but fun.

October, I am ready for you! 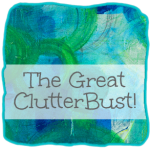 Wanna get your own house in order? The cart for the Great ClutterBust opens on 9/22, and we start officially on 10/1. Until then, read all about it here.