What the hell happened to my late Sunday (which, granted, is frequently effectively early Monday) weekly review post??

Friday morning I flew to Portland for the much-awaited World Domination Summit (#WDS), where 500 unconventional souls – bloggers, travel hackers, entrepreneurs, writers, artists and creatives of all kinds – gathered to meet, get inspired by each other, and basically charge our mutual engines to change the world.

Why, when there are so many pressing demands on my time and money, did I spend hundreds of dollars and four precious days at an unconventional conference?

Because although the digital world is wonderful…

Nothing can compare to actually being in the same room with other people.

I know from experience that something magical happens when you’re in the real-life presence of other real-life, warm-bodied, flesh and blood human beings.

Online courses are great (I’ve gotten more from Action Studio than I can possibly articulate).

I’ve listened to dozens of recorded interviews over the past year (not to mention conducting them), and been inspired up the wazoo by them.

But none of these can hold a candle to meeting people in the flesh.

Which is exactly why I was among the first batch of WDS registrants when Chris Guillebeau opened the shopping cart last year. I had no idea what the conference would be like, but these things I knew for sure:

I was right on both counts.

Everything from the venue, to the mid-morning snacks (yogurt parfaits with blueberries! mixed nuts! bamboo skewers of fresh fruit!), to the line up of inspiring speakers (my notebook is full, and I’ll be processing for weeks), was well-thought out and executed with excellence. Not to mention unconventional.

Check out the view to my right when seated near the stage of of the main meeting hall, for example: 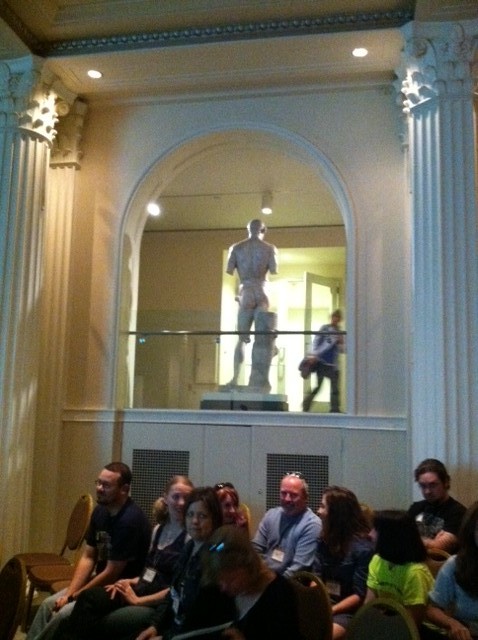 (Seriously, what other convention hall have you been in with such a great rear view?)

But the biggest gift of the conference was the people.

The magic of attaching bodies to Twitter avatars I’ve known for months. Of sharing oxygen and connecting with people I knew from online, and people I’d never heard of before.

Chris could easily have brought all the same people together online for a telesummit, and the messages would have been inspiring. It certainly would have been a whole lot easier and a helluva lot less expensive for him and his entire team of volunteer ambassadors.

But Chris knew that in-person would be more powerful, and I’m profoundly grateful that he did.

When Andrea Scher and Jen Lemen of Mondo Beyondo passed out Sharpie markers and asked everyone to draw a word on their skin, the energy in the room was electric. Drawing a temporary tattoo on my hand wouldn’t have had nearly the same power in the isolation of my studio. Plus for the rest of the day, I mingled with 500 other people with their own unique Sharpie tattoo – an instant conversation starter. 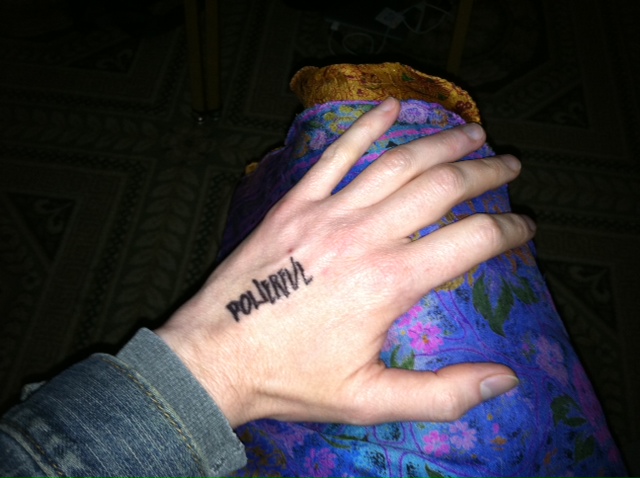 When DJ Prashant got the entire crowd up and doing Bollywood dance moves, well, let’s just say this scene would be impossible to reproduce with a telesummit (video courtesy of JD Roth):

And hugs from the likes of Pam Slim, Danielle LaPorte, Pace & Kyeli, and Chris Guillebeau himself? Nope. Not happening at a telesummit.

But yes, so totally happening this weekend. And a lot more hugs besides.

Which may, by themselves, be enough of a reason to go to that next in-person event you’re considering. Yep. The hugs. Simply cannot be beat.

They even made the painful catch-up that I’m in the middle of now that I’m back home worth it.

I’ve already signed up for next year. And I already have my goal in mind: more hugs.