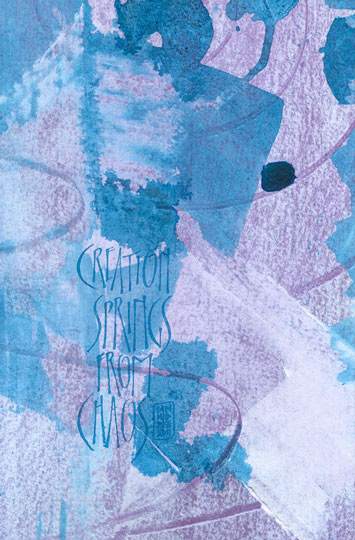 Here’s one from the archives, which felt ripe for a revisit. Originally published on January 3, 2013, the principles here are timeless. Enjoy! -xoMelissa

I was newly married, with lots of time on my hands, having recently acquired a “useless” academic masters degree, only to decide that the dream of going on for a PhD had lost its luster.

With my planned-out career path in a shambles, I felt utterly adrift. “What do I do now?” I wondered.

After all, I’d been writing my whole life — what else did one do as a Liberal Arts major in college and grad school but write? Why not turn it into a career?

Strangely, though, when I actually needed it, my gift for assembling words together seemed to have left me.

That summer after my wedding, sitting in front of my little Mac Classic was exquisite torture. My mind was as blank as the tiny screen.

Eventually I’d just give up, not having written anything — or at least anything that wasn’t garbage.

I wanted this thing — to be a writer – so badly, and yet actually writing was so excruciating! I spent way more time reading about being a writer and lamenting my inability to write than I ever did actually writing.

It was just too hard!

Every time I’d sit down to try and go forward, the Universe seemed to throw up a stop sign. Surely this must indicate that writing was the wrong path for me. Clearly I sucked at it. It was painful.

Looking back at my younger self, I feel enormous sadness and compassion. That earlier me was trapped in a lie that so many of us get stuck in, perhaps the biggest misconception about creativity there is: that it is always easy and fun.

Yes, when things are flowing and at their best, there’s a sensation of ease, and definitely fun, but the creative process is not all ease.

In his landmark book, Flow, psychologist Mihaly Csikszentmihalyi shares years of research that demonstrate that:

The best moments usually occur when a person’s body or mind is stretched to its limits in a voluntary effort to accomplish something difficult and worthwhile.

He goes on to add,

Such experiences are not necessarily pleasant at the time they occur.

Did you get that? Let me repeat it, because this is really, really important:

The best moments of our lives — moments of flow — are not necessarily pleasant at the time they occur.

In addition, there’s this: in the years since I “gave up on writing,” I’ve discovered that happiness does not lie in mastery of a skill or goal, but in the pursuit of it. (Click to tweet this!)

Too bad my younger self didn’t know that…

Here’s a really weird irony: I started making art as a way to procrastinate from the torture of writing!

Yep. For me, art, which creates so much resistance for so many people, was the thing I escaped into. There was no pressure to produce or be perfect — I was just playing.

When I decided to follow the flow of ease, and determined to make art — instead of writing — my career path, that’s when I ran into roadblocks.

I remember the first ketubah commission I ever did, back in 1996. I was confident enough when I accepted the job, but the act of trying to execute it was as excruciating as any of those failed writing sessions in front of my Mac Classic. But this time I had a paying client and a deadline!

The stakes were much higher, but I was too afraid of bailing on my commitment, so I had to persevere. (Otherwise I might still be sitting there, twiddling my thumbs, telling myself I didn’t have what it took to do it.)

Imagine for a moment, what it would be like to reach your hand into a black hole.

(Yes, I know the laws of Physics make this impossible, but just pretend for a moment.)

You don’t know what’s inside the black hole, you have no idea what you’ll pull back out, and there’s the very real fear that you might just get sucked inside completely and never come out.

What I’ve learned over the years is that this is what it feels like every single time I begin a new creative project.

Whether it’s making a piece of art, writing a song, writing a blog post, designing a class, learning to play a new piece on my ukulele, or anything else. The act of creation always starts in chaos, in a metaphoric black hole. (Click to tweet this!)

Somehow I managed to get over that black hole with my visual art, but it didn’t occur to me until recently to see my early writing attempts as exactly that same process. Even though I remember having that black-hole feeling with every college and grad-school paper I ever wrote, somehow I believed that writing after graduating, writing “for myself,” should be easy.

My gremlins had me convinced that the fact that it wasn’t easy must mean I simply wasn’t good at it, and should give up.

What a shame! Fifteen years I spent not writing because I let the gremlins take the wheel.

All because I believed the lie that if I were meant to be doing it, it would be easy, effortless, and always fun!

The 5 Words Every Creative Needs to Know

I remember a friend and fellow calligrapher, Cheryl, confessing over the phone years ago how very hard her first year of parenthood was. Juggling being a mom, a wife, an artist, a teacher — it was just unbelievably hard.

Then she said five words that have stuck with me ever since. Yes, it was hard, she said, but:

“Hard does not equal bad.”

This was a new concept for me, and a profound one that applies to every part of life. You would do well to tattoo those five words into your grey matter.

Learning to play the guitar is hard! My fingers hurt like hell for the first few weeks, and I couldn’t get them to do what I wanted to save my life. I could see my teacher shift from chord to chord with no effort, but my own body told me it had to be an illusion — surely it was physically impossible! It took lots of time and practice to develop a facility on the instrument.

Learning to do calligraphy is hard! My early attempts were wobbly and poorly spaced. It took years of effort — hard work! — to educate my eye and train my hand to make letters that pleased me.

Learning to sing jazz is hard! Standing up in front of an audience with a microphone in my hand nearly drove me out of my skin with fear the first several (dozens [or hundreds?] of) times I did it. It took years of practice to train my voice, and years of performing to get comfortable on stage.

Think of anything important to you — maintaining a love relationship, parenting, sports, your job, being a friend. I’m willing to bet the skills and abilities you take for granted now did not start off easy.

You had to fall down on your diapered butt lots of times in order to learn to walk!

Creativity is the same. We see other people writing, painting, singing, or whatever with apparent ease, so it’s easy to expect it should come easily to us, too. But it rarely works that way.

Blocks are not blocks to creativity, they are creativity.

In other words, it’s the very act of pushing through the block that unleashes our creativity. (Click to tweet this!)

I wish someone had been able to explain that to me back in 1994.

But I have no regrets. My own deep blockage for many years (with writing in ’94, with my visual art for many years after that) is what ultimately infused me with such passion and purpose, putting me on my mission to empower people to follow their own creative callings.

We teach what we need to learn, after all, and my job as an inspirationalist, transformer and creativity instigator is a direct outgrowth of my own need to inspire, transform and instigate myself!

Need a little nudge in the direction of your dreams? Maybe watching me publicly do something poorly and share it with the world will help you allow yourself to do something badly, in order to learn to do it well.

In that vein, enjoy this musical musing on learning a new thing, which summarizes my thoughts, and models making the goddamn effort even when you haven’t mastered it yet, all at the same time. I hope you have a good laugh at my many awkward mistakes (this video is after many hours of practice and much, much worse playing than you see here, btw!).

Then I’d love to hear from you what you’re willing to do badly, even though it’s hard, in order to get to the flow and fun.