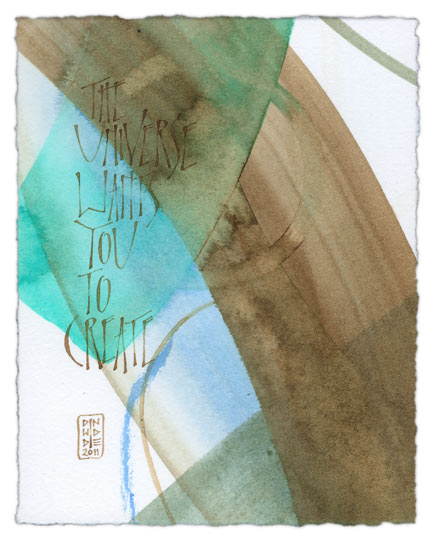 There are so many reasons people cite for why creativity doesn’t hold a bigger place in their lives.

Time is certainly a big one — I don’t know anyone who doesn’t have way too much to do and not enough time to do it in.

Then there’s self-doubt — the gremlin voices that tell you you’re not good enough, you’ll never be good enough, and certainly never as good as your heroes, so why bother? And who do you think you are to even try, anyway?

And then there’s the nagging sense of “what’s the point?” You’ll never make money at it (your gremlins tell you), and besides, you should be finding the cure for cancer, or opening a shelter for lepers, not wasting time on such selfish frivolousness as your creative pursuit!

Sound familiar? I refer to these as the three Big Lies: No Time, No Talent, No Purpose (hat tip to Sue Ann Gleason for these tidy terms).

When I asked people in my recent free workshop, Shatter Your Self-Installed Glass Ceilings, which of the three lies affected them the most, by far the most common response was “No purpose.” It’s the lie that kept me the most stuck for the most years, too, which is why it is the subject of the first module of my Academy program.

If people don’t feel a sense of purpose for doing that thing they love, it’s impossible for them to screw up the courage to make the time for it and forge their way past the self-doubt gremlin to get down to work.

As I share in the Academy, though, the fact that creating gives you joy is all the purpose you need.

Don’t believe me? Let me break it down for you, and offer some additional arguments for why getting your creative groove on is as vital as all that other, supposedly more important work that demands your energy.

Here are six reasons why you absolutely, positively need to feed your creative hungers.

1) You’re hungry for a reason

Think of it this way: if desire is a bad thing, something we should ignore and resist, why do we have the desire for food? Should we stop listening to our body’s cries to get us to eat?

If we didn’t have hunger, we’d all starve to death, right?

If we didn’t feel sexual desire, the human race would die out!

There’s a reason you feel that hunger to create, to express yourself in the creations that call to you: it’s because the Universe wants you to! (Click to tweet.)

If you look deep inside, you already know this to be true, because you know how different your life goes when you are, or are not, feeding your hunger.

Which leads me to argument number two:

2) Unexpressed creativity is not benign

With over 23 million views on her TED Talk videos, and two New York Times #1 best-selling books (The Gifts of Imperfection and Daring Greatly), Brené Brown, has amassed a sizable audience, and god bless her, she is using that platform to finally focus a little attention on the dangers of unexpressed creativity.

As she said in a talk at the World Domination Summit in 2012:

“Unexpressed creativity is not benign. It metastasizes into grief, rage, judgment, sorrow, shame. It becomes destructive.”

But you already know this, if you pay attention to your body.

3) Science proves it is not self-indulgent

There’s no getting around the fact that in our culture, creators are maligned as “self-indulgent,” and creative expression is looked down upon as frivolous. Science, however, proves otherwise. In fact, doing your creative thing is one of the most powerful ways to restore energy to your brain!

The topic of human willpower has been very popular with neuroscientists in the past several years. Self-control resides in a particular section of the brain, the pre-frontal cortex, or PFC. When you are required to exercise willpower — for example, when your boss yells at you, and in order to keep your job you have to keep a lid on the scathing comeback your more impulsive side is dying to loose — your PFC gets fatigued. Just like a bicep, after several reps of curls with a heavy weight, it needs to be refreshed and restored.

One group of researchers gave subjects a series of tasks that taxed their willpower “muscle,” in order to discover how best to restore self-control energy to their brains. Their research found that one of the most effective ways to restore willpower is to do something that engages your interest.

Your impulsive lizard brain may tell you that what you need is to veg out in front of the TV, but it turns out that getting yourself into a state of flow is actually much more effective at restoring energy to your brain.

Anything that engages your interest can do the trick: mountain biking, solving a puzzle… or jumping in the Creative Sandbox to feed your creative hungers!

4) You have no idea how your work might touch somene

I can’t tell you how many creators I know who are afraid to share their work. They hoard it in drawers, or on their hard drives, because they’re convinced it’s not good enough to share.

That used to be me, too. Hey, I get it! It’s scary to show something to the world when you know it could be better. And face it, it could always be better, right?

There are so many reasons why I feel very strongly that creators need to share their work — before they feel it’s “good enough.” I could (and probably will) write an entire post about that alone. For the purposes of this article, though, I want to focus on just one of those reasons:

Sharing your work is the only way it will ever touch someone.

And although you may your latest creation utterly worthless, you simply have no idea how it might affect someone else.

I can’t tell you how many times I’ve cringed while clicking the “Publish” button on this blog, or the “Share” button on Instagram or Facebook, while thinking to myself, “Well, that’s not my best work,” only to have someone leave a comment that what I’d written had made a big difference in their life, or that they absolutely adore (even want to purchase!) the artwork I dismissed as crappy.

Feed your creative hungers for yourself, and because you simply never know how what you create might touch someone else.

The Talmud says, “If you save a single human soul, it is as if you had saved an entire world.” I suspect that the rabbis who wrote this were referring to the physical saving of lives, the difference between life and death, but I will take the liberty of applying it a bit more broadly. If you save one single person from a lifetime of low-grade misery, it is as if you had saved the entire world.

There’s always one soul you know you can save: yours! And if all human souls are equal (and why wouldn’t they be?), then saving your own soul is no less important than saving someone else’s.

Therefore, if feeding your creative hungers is a way to save your own soul, then according to the great thinkers of the Talmud, by doing your creative thing, you are, in fact, saving the world.

For some, creating goes beyond the metaphorical saving of lives and becomes quite literal. This past weekend I was privileged to see a documentary film-in-progress, They Played for Their Lives, which tells the stories of Holocaust survivors who owe their lives to their music. .

From the about page for the film:

The Nazis highly valued music and often gave special treatment to those who had the skill to play an instrument.  This appreciation to music allowed some musicians to get better jobs, better living conditions, more food and clothing.  In numerous ghettos and camps, people who played an instrument were selected to join the local band or orchestra.  Some musicians were forced to entertain the Nazis during holidays and parties.  The travesty of musicians who were forced to play in the concentration camps would haunt them forever.  In many cases, they played as they watched their family and friends march into the gas chambers.  The ‘useful’ skill of those musicians was undoubtedly a horrific and traumatic experience, but one that often saved their lives: “the cello really saved my life because to be in this orchestra was a way of survival, because as long as they wanted music they would be foolish to put us in the gas chambers” explains Anita, a survivor from Auschwitz.

In addition to keeping these prisoners out of the gas chambers, “music gave us so much, to escape even for a few moments to a ‘normal’ world” explains Greta, a survivor from ghetto Terezin.

In other words, music kept them from being murdered, while also giving them something to live for.

Granted, this is an extreme case, but those who aren’t victims of genocide may still fall prey to dark forces that threaten to do us in. I know survivors of severe depression who climbed their way out of a suicidal pit only through the grace of following their creative urges. One acquaintance has a doctor who gets it — his prescription, upon checking her out of the hospital? “Now go create!”

A wise man, indeed. I hope you now see that we’d all be better off following his advice.