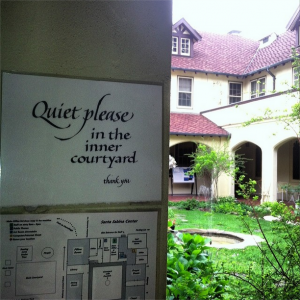 As I write this, I’m away at the Santa Sabina retreat center for the annual retreat with my calligraphy guild, the Friends of Calligraphy. Twelve years ago I came to Santa Sabina for my very first FOC retreat, and I’ve missed only one in the years since. This retreat holds a sacred spot on my calendar.

Back in 2002, the spousal support that had been filling in the gaps in my income since my divorce in ’99 had just ended with the New Year, and I was in a mad, desperate scramble to grow my ketubah art business enough to keep me afloat. My intention when I signed up for the five-day FOC retreat was to take a much-needed break, to play, relax, make art for me, rather than for work.

Alas, the best laid plans often go awry, as they say, and mine sure did that year.

Right before the retreat I found myself up against hard deadlines to complete not one but two new ketubah prints in time for client weddings, so instead of five days to get away from work, the five days of the retreat were among the most stressful in my life. While everyone around me was relaxing, laughing, taking naps and long walks, having fun, I was a big ball of tension, fighting constant migraines, my shoulders up by my ears, my blood pressure threatening to explode through the roof.

I felt like a starving person with a muzzle on, wandering among people enjoying a delicious smorgasbord.

I learned my lesson. After that miserable experience I declared client work utterly off limits at the retreat. I allow myself to do business-related work, but only work that I choose, never work I’ve taken on to serve a client’s specifications, or to complete by a client’s deadline.

That has made all the difference.

What Happens On Retreat

Each year’s retreat is unique. I never know for sure what I’ll end up working on, frequently end up working on something entirely different from what I’d initially planned, and often I’m surprised by what comes out.

Most years I’m astonishingly productive: one year I painted three new ketubah designs; the year after that I created an entire alphabet that I turned into two more ketubah designs; last year I wrote over 13,000 words of a rough draft for a book.

One year I brought my sewing machine and made a small quilted hanging. Another year I made a hand-calligraphed and bound book to give to a friend.

In 2010, after a bad breakup, I spent the entire retreat writing — working out my thoughts and feelings, brainstorming for the blog I had at the time, thedatingqueen.com. Unusually for me, I didn’t make any art, didn’t touch any paint or ink.

Then on the final day, a phrase popped into my head in the shower, which I turned into this piece in the last two hours before lunch: 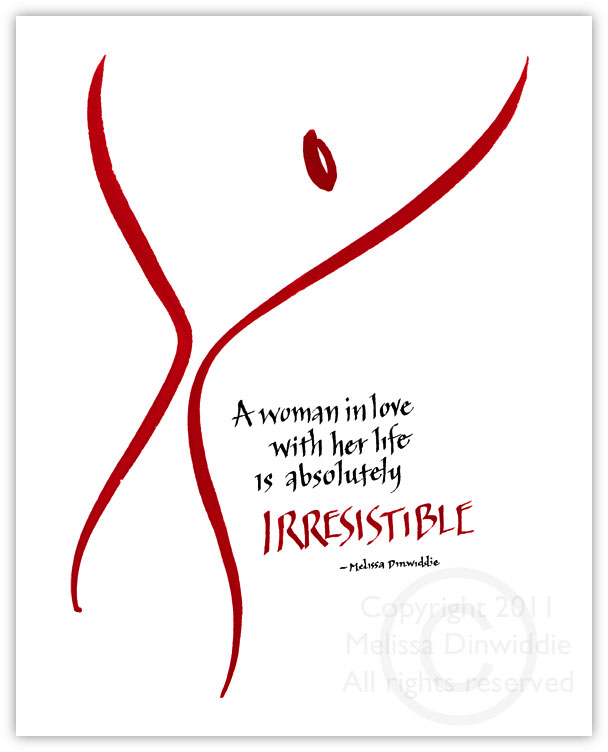 That led to a small line of artwork after I got home: 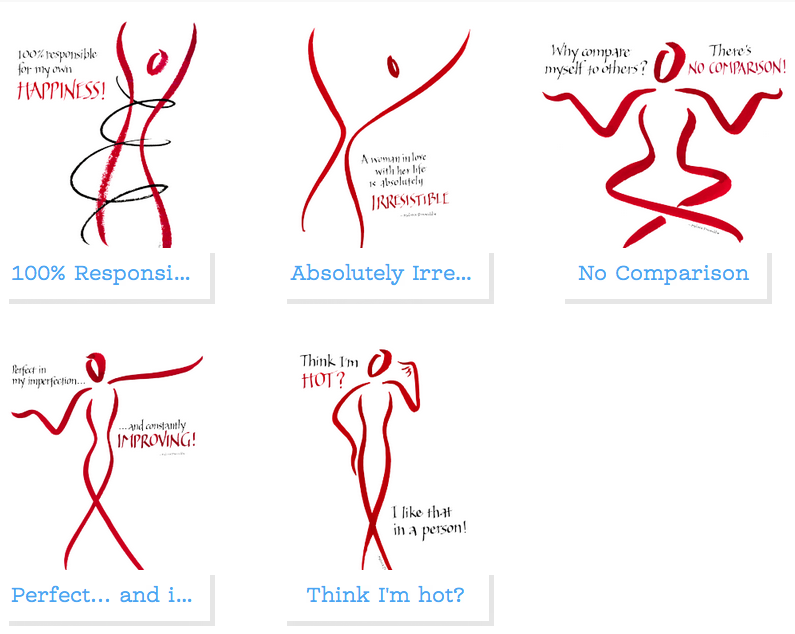 And then to a matching line of yoga art: 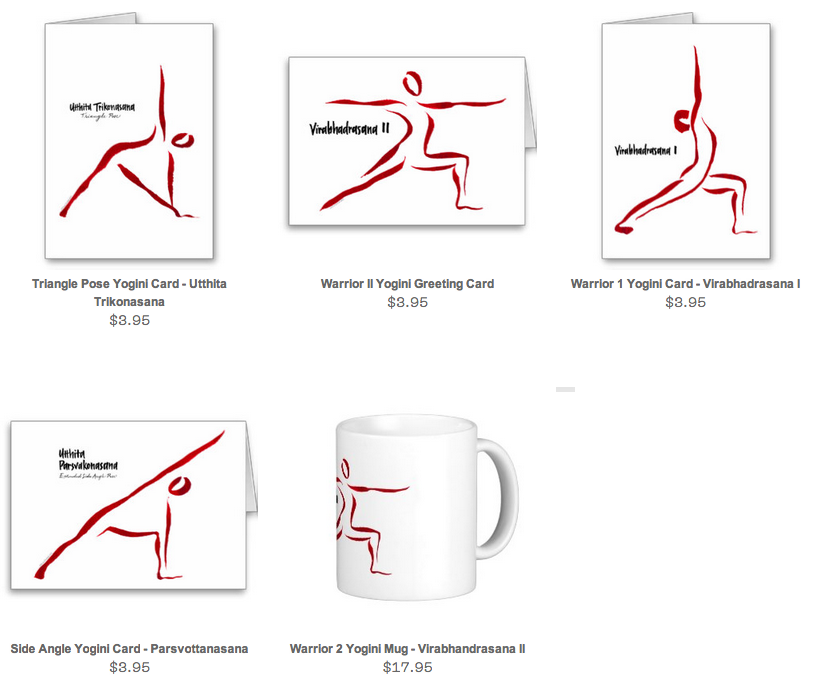 Although these “irresistible woman” brush stroke designs really excited me at first, ultimately they ceased to satisfy my creative hunger. They were too meticulous and design-y to create, too much like the client work I wanted to escape from.

It was this revelation — the epiphany that I needed to play, let loose, and make messes, like a little kid in a sand box — that birthed my Creative Sandbox metaphor, which evolved over time into my 10 Rules for the Creative Sandbox, now known as my Keys to Creative Flow.

And all of it started at this retreat.

The Pattern of Retreat

Although each retreat is different, they all tend to follow a similar pattern, which I’m thankfully beginning to recognize.

I start out just needing to catch up on rest. Often I sleep a lot the first day, and I have to work hard to practice self-compassion, loving myself up rather than beating myself up for resting, rather than producing.

Then I spend a couple of days flailing around, trying to find a groove, not sure what I want to focus on, not satisfied with anything I do (hello, gremlins!) Everyone else’s work always looks so much more exciting and interesting than my own (hello, Comparison Trap!)

For many years I also came home with the goal of creating personal retreats at home throughout the year. I’d block off a weekend once a quarter to play and make art! A full day every month! A half day every week!

I had visceral evidence of how productive and amazing it was to immerse myself into a big chunk of create time, and I was committed to keeping the momentum.

But it never happened.

Work always got in the way, which made me resentful, and increasingly angry at myself. I felt like a massive failure. Thank god I had the retreat once a year, otherwise I’d never have made any art at all!

Everything changed on February 1, 2011, when I interviewed Michele Theberge for the Thriving Artists Project (now ArtEmpowers.Me). Michele is a professional artist who mentors other artists who want to build professional art careers, and she shared in our interview that she tells her mentees that if they can’t put fifteen minutes a day into their art, they’re making an excuse.

A bell went off over my head, and suddenly I realized that was me! Guilty as charged! Ooh, how I hated to admit it, but I had been making excuses, telling myself I needed big chunks of time in order to create, that only an uninterrupted span — like at the retreat — would do.

I decided to try this crazy fifteen minutes a day idea, and to my surprise it led to my most prolific year ever! Over the course of the remaining eleven months of 2011, and beyond, I proved to myself that “tiny and daily” was a highly effective way to stay in creative flow in between retreats.

We don’t need days on end of uninterrupted create time in order to do our best work! We simply need to put intention ahead of circumstance. We need to not let circumstance get in the way of what we really want.

For me, what works best is to commit to a daily practice, and let it be tiny, because the hardest part is starting, and when the goal is ridiculously achievable you’ll actually achieve it. When you achieve a goal, even a ridiculously achievable one, it makes you feel successful every day, which is a much better way to stay on track than continually falling short of a more ambitious goal and then beating yourself up about it.

Plus remember that the most important practice is just getting back on the wagon when we stumble, as we all invariably do (even with ridiculously achievable goals!)

Now I feel like I’ve finally found the secret to creative nirvana. It’s not to permanently escape regular life for a 24/7/365 existence of uninterrupted create time — a permanent retreat. I may dream of being able to make art all day long, with no cares other than to show up at meal times if I’m hungry, but much as I enjoy a week or so of this kind of existence, it’s not sustainable over the long haul.

I’d miss my husband, my cat, the simple pleasures of real life! And I like my daily routine. I like my own bed and my treadmill desk. I even actually like the gratification of meeting and overcoming challenges (much as I might complain about them in the moment).

I also like getting away from all of that on occasion.

So my recipe for creative nirvana is to build a sustainable practice into my daily life (no matter how tiny!), and also make time for retreats, workshops, and other inspiring experiences as often as I can. Right now I block out sacred retreat time on my calendar at least four times a year for events that I can’t live without: the Friends of Calligraphy Spring Retreat in March, my Create & Incubate Retreat in May, Jazz Camp West in late June, and Design Your Life Camp in September.

I also make time throughout the year for other getaways and workshops that come along, or that I create.

The intensive retreats and getaways are like charging stations that pump me up and propel me forward, and the regular practice keeps me humming along happily in between. They complement each other beautifully.

So that’s my recipe for creative nirvana. Season to taste, and let me know how it works for you.

Meanwhile, if you’d like to join me at my Create & Incubate Retreat, May 23-26, I’ve still got some spaces left. Click here to read more and register.