I’m delighted to share with you my latest gift to the creatives of the world: a new graphic and poster of my Keys to Creative Flow.

Formerly called the “10 Rules for the Creative Sandbox,” these are the “secrets” that got me out of more than a decade of resistance, and back to joyfully creating again. I draw on these “rules” myself on a daily basis to keep perfectionism and gremlins at bay, and I hope you find them useful, too.

Please share the graphic below, post it on your own blog or website, and if you’re a subscriber to my insiders’ newsletter, I’ll send you a link to a letter-size PDF to print out and hang on your wall! (If you’d like a larger version, I even have a poster for sale, which you can buy here.)

The funny thing is that this artwork almost never got made. If not for the Keys themselves, it surely wouldn’t be here now!

I’ve been wanting to turn my Creative Sandbox Rules into handmade artwork for over a year, but… Well, scroll below the artwork and read on for the full story…

The Story of the Keys to Creative Flow

Back in 2011, on the first day of February, I made the commitment to spend at least 15 minutes every day that month making art.

With the exception of an art retreat I went to every spring, it had been over a decade since I’d really made art for myself. I’d built up a business making art to the specifications of clients, and after so much time focusing on pleasing others, my perfectionist tendencies had gotten out of control.

I was stuck. Blocked. My poor creative spirit was languishing, locked away in a closet.

Now, though, I was determined to change that, and I knew I needed as much help as I could find to get me past the perfectionism and gremlin voices. My biggest problem, I realized, was that I never felt like anything I did was good enough, so instead of trying, I’d been making excuses, blaming my non-existent output on “lack of time.”

On February first, an artist I was interviewing shared that she tells her mentees that if they can’t put 15 minutes a day into their art, they’re just making an excuse. A lightbulb went off over my head, and I finally accepted that it wasn’t a matter of having the time, it was a matter of making the time! I committed then and there to try out this 15-minutes-a-day thing, with a goal to get back to the playful state of freedom I remembered from nursery school — I wanted to feel like a little kid playing in a sandbox.

The notion of the Creative Sandbox was born, and with that metaphor in mind, I designed a short set of guidelines for myself — “rules” that I would keep always in mind when I approached my art table.

Initially, there were just three of these rules — the bare minimum that I thought would help get me past my resistance and creating again:

The rules worked. Setting the intention to create regardless of what I thought of the outcome, combined with the accountability of the public statement of commitment, led to a highly prolific month.

That grew into a highly prolific year: from February 1 to December 31, I completed over 150 artworks, which I started referring to as ArtSparks.

About a year later, when my friend Sue Ann Gleason invited me to be interviewed as part of her Well-Nourished Woman Inner Circle near the end of 2012, she asked about the rules I’d developed to get me creating. Our conversation helped me realize that I had many more tools in my box than those original three rules. So I expanded the three to ten “Rules for the Creative Sandbox,” and even designed a week-long mini-course around them — Creative Sandbox 101.

The Creative Sandbox Rules have continued to evolve since then, growing more pithy and concise, and even spawning a seven-minute presentation and an original song!

Meanwhile, I had slapped together a downloadable PDF of the rules to offer as a freebie, but what I really wanted was to create a colorful, hand-lettered poster.

I am a calligrapher, after all. It felt only appropriate that I would use my skills in service of my message.

But I never managed to make the time…

Until recently, when I realized that — lo and behold — I’d fallen into the perfectionist trap once again!

The real reason I’d never created a hand-made poster was because I wanted it to be awesome. I wanted it to blow people away. And of course, there is nothing like the pressure of awesomeness to shut a creative down, fast!

The beautiful thing, though, is that I had my Golden Formula (self-awareness + self-compassion = the key to everything good) and my Creative Sandbox Rules themselves to help me out of that trap!

I realized I could use my rules to help me past the “this won’t possibly be good enough” gremlins. I could approach this poster as a Creative Sandbox project — an imperfect thing, that I could have fun with!

I could use my rules to make a poster of my rules!

This weekend I finally completed the artwork, and today it makes its debut, retitled as my Keys to Creative Flow.

I knew I wanted to change the title, because most people would be unfamiliar with my Creative Sandbox metaphor, not to mention the fact that most creatives balk at anything claiming to be a “rule.” (After all, most of us are rebels at heart!)

So I floated some possible titles over on Facebook, which elicited a flood of Very Strong Opinions, and helped me land on the new title, Keys to Creative Flow.

All that was left was to design and execute the artwork! Not a small task, but one I knew I could complete within a week or so.

First, last weekend, I booted up Adobe InDesign to cobble together a mockup, which I printed out to use as a layout guide for the hand lettering on the final artwork:

Then this weekend I hit my art table, hard. I mean, hours. Several of them.

On Saturday, I lettered out several lines in a trial run, using a pointed pen, India ink, and watercolor: 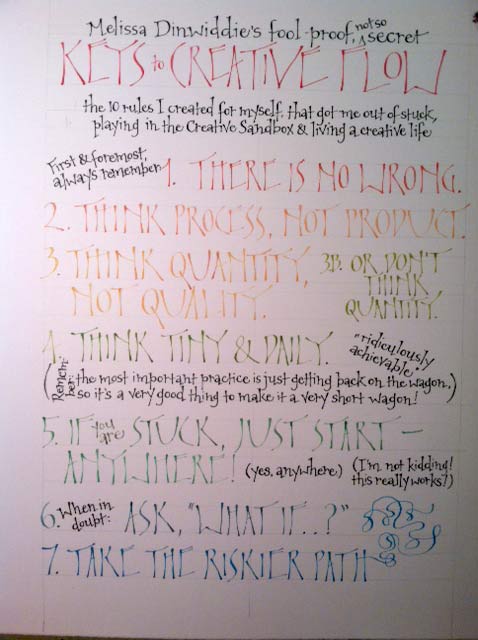 It was clear right away that, much as I love my spindly, pointed pen letters, they just weren’t bold enough to do the poster justice. A poster needs to be attention-grabbing!

So I pulled out a Mitchell 1 1/2 broad-edged nib and went over the colored letters again: 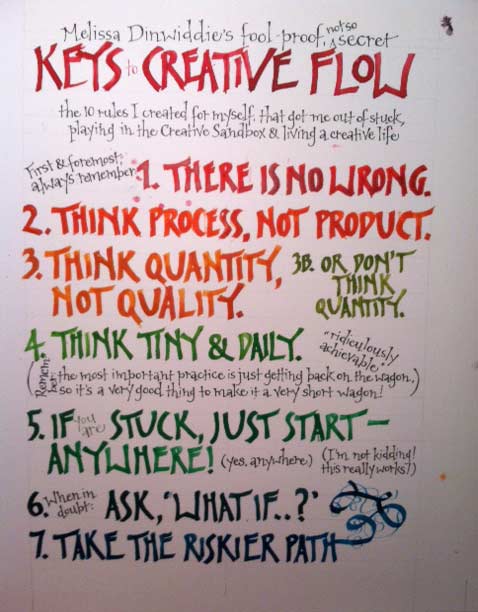 Now I was starting to get somewhere! But now the title was looking undernourished compared to the other colorful letters, so I pulled out a Mitchell 0 and went over the title once more: 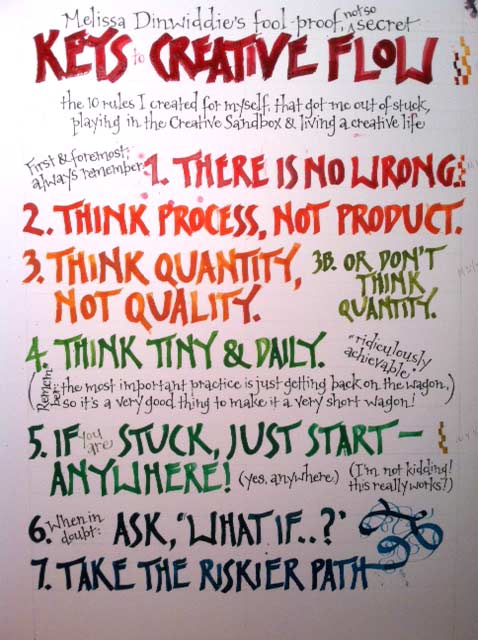 Bingo! This was it! I was ready to start work on the final art!

The problem, though, is that mixing the different shades of watercolor to the exact right consistency threatened to be much more time-consuming than I was prepared for. Plus the possibilities for time-consuming errors (blogs and splotches and such) were legion. So I opted instead to letter the entire thing out with my beloved walnut ink, and then add color later in Photoshop.

Here’s the final art, all ready for scanning: 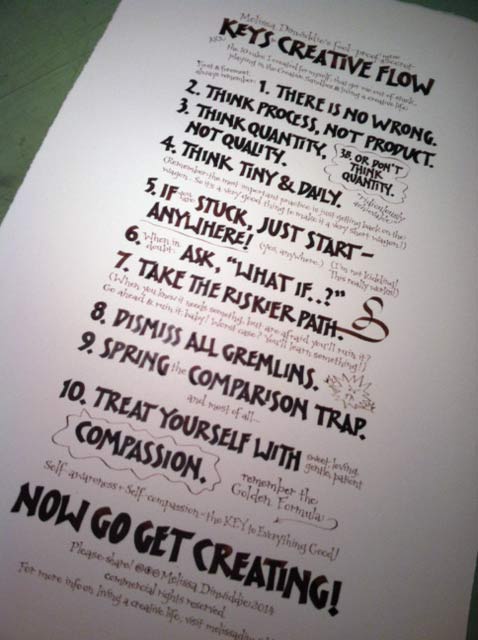 What a feeling of accomplishment!

Then let me know how the keys make a difference in your own creative life.

PS — For a graphic the size of the one above, without having to download and upload to your own site, just copy and paste the following code: