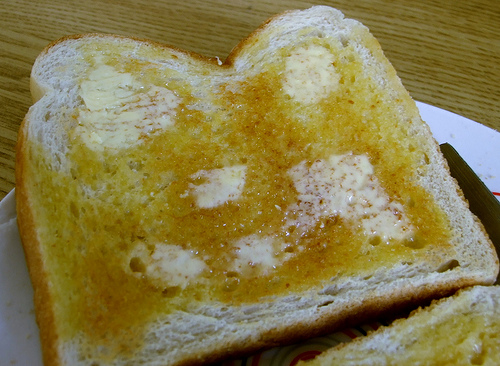 When I was a kid, one of the best parts of the weekend was my dad’s sourdough.

Living in the San Francisco Bay Area, we were lucky to share our home with microorganisms that make the best sourdough on the planet, and my dad had it down to an art form. On Friday or Saturday night he’d pull out the ceramic container that lived in the fridge, mix the weird-smelling sponginess inside together with flour and water, cover the bowl with a dish towel and put it up on the top of the cupboard, near the ceiling, where the sourdough-making beasties were most likely to hang out and add their magic to the mix.

The next morning we’d be treated to a super-sour batch of pancakes (my favorite) or waffles (my brother’s favorite), or sometimes biscuits (okay, I lied — these were definitely my favorite).

Weekend brunches were the best at my house!

In addition to the quickbreads above, there were a couple of years there when Pop also made killer sourdough bread once or twice a week. He even bought a special set of Pyrex™ baking tubes, which made eerily perfect cylindrical loaves, which we in turn sliced into perfect rounds of bread.

Sourdough bread is definitely best toasted, and the toaster in our house got a lot of use.

Which meant, of course, that we got very practiced at buttering said toast.

My dad was the pro — his toast was always impeccably buttered, with an even layer of melted butter (or more likely in our house, margarine) from edge to edge. Mom’s technique was more slapdash, resulting in a big lump of butter (margarine) in the center, with the toast getting progressively drier and more butter-poor the closer you got to the crust.

Mom loves butter (margarine too, actually), and would be happy to eat it straight out of the carton, so her technique worked great for her needs. When you’re sprinkling your cinnamon sugar, however, and you want it to cling consistently to every millimeter of your toast round, a mostly-dry piece of toast with a chunk of partially-melted butter (or margarine) in the center just doesn’t cut it.

I was determined to learn to butter toast like my dad did. What was Pop’s secret?

Pop learned a saying from someone else (his own father, perhaps?), which stuck with me:

“Butter around the outside, and the inside will take care of itself.”

Or, to be a little clearer:

“Butter along the edges, and the middle will take care of itself.”

In other words, start spreading your butter not in the middle, but along the outer edges, by the crust. As you circle around your slice of toast, keep spreading the butter at the outer edge of the still-dry part of the toast. You’ll end up buttering in an ever tightening spiral, until at last you reach the center.

It’s a thing of beauty.

What does this have to do with living a creative life?

I will explain, dear reader.

Several months back I had a half-day studio session with Cairene.

(Brief interruption to say: Run, do not walk, to work with this woman! And no, that is not an affiliate link. Virtual hugs to the wonderful Laureen for pointing me in Cairene’s direction. And yes, it’s a random coincidence that their names sort of rhyme.)

When the student is ready, the teacher appears, they say. I was oh-so ready for Cairene, who pointed out (among many other things) the importance of giving attention to the edges of your work: exits, endings, transitions from one “container” to the next.

The time I spend writing this post, for example, is a container. At some point I’ll need to shift my attention away from writing a blog post and toward the next thing.

Picking my sweetie up at the airport, say. That’s another container, and something else I have to do today (in about twenty minutes, as it happens).

What do I need to do to wrap up my writing session? Save the blog post, or if it’s done, schedule it for publication. Bring my attention out of my computer and onto what I need to get myself safely to the airport.

But I actually need to do a lot more than that.

In this case, I need to put on some real clothes (unless I want to drive to the airport in my pajamas), feed the cat — and, oh, yeah, since I’m dog-sitting for my parents’ German Shepherd, Chloe, I also need to let the dog out and feed her, too.

So it’s not really just a matter of stopping writing and *bam!* instantaneously driving to the airport. There is a whole slew of “transition stuff” that needs to be taken into consideration if the rest of my morning is to go smoothly. And just like the buttered sourdough toast, if I pay attention to those edges, I’ll have a much more pleasant experience.

When I get back from the airport, what needs to happen in order for me to turn my attention back to writing, or to whatever container is next?

If I think about these things in advance, it’s truly amazing how much difference it makes!

What I typically tend to do is forget about things like the fact that I have to feed the critters before I can hop in the car, so I extend my writing container for longer than I really have time for. Then I end up scrambling like a madwoman, cursing a lot, and being embarrassingly late for things like picking my sweetie up from the airport.

What I typically tend to do is not think about endings, edges, and transitions, and that means great stretches of otherwise productive time gets lost in a void of never-ending-transition.

My day is in constant danger of becoming a black-hole of spinning my wheels. Or to stick with my toast metaphor, a piece of mostly-dry sourdough toast with a clump of mostly unmelted butter in the middle.

But now, thanks to Cairene, my usual M.O. is changing. Instead of just focusing on what I have to do, I’m learning to shift my focus just an inch to the left and right of that, to how I’m going to end a given container, transition out of it, and transition into the next thing.

Butter around the edges and the middle will take care of itself.

Focus on the edges, endings, and transitions of the tasks, activities, and “containers” of my day, and the whole day flows ever so much more smoothly.

Now I’m going to get dressed, feed some hungry critters, and make myself some cinnamon toast before heading off to the airport to pick up MB.