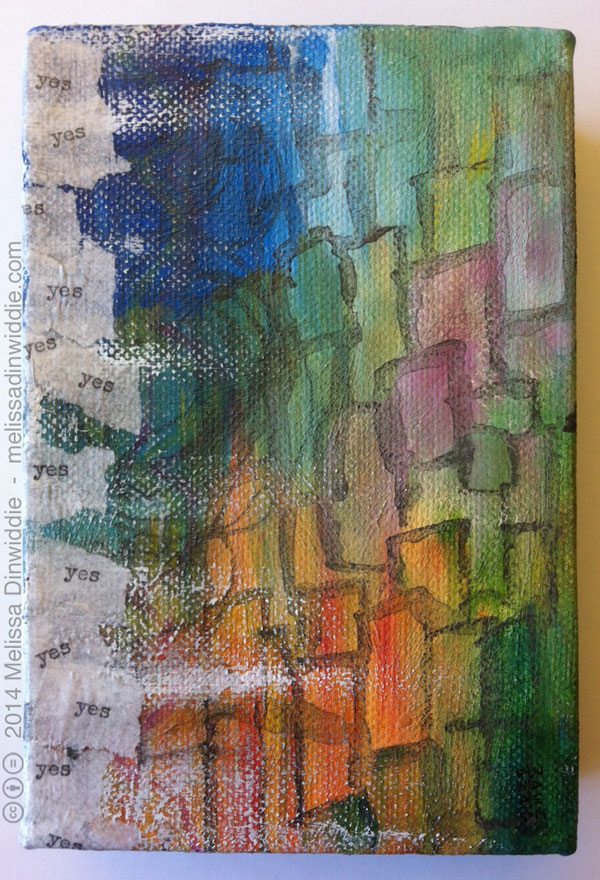 I was so annoyed at Miracle Man when I woke up this morning.

The sound of his shower woke me up at 7:30, and I was just so tired from being up later than I wanted, and I so wanted to blame MM.

To rewind a bit, I knew all yesterday that it was going to be a late night, because I’m performing in an improv “cave match” on July 20th, and my team, All That Jazz, had a rehearsal in San Francisco, which meant I wouldn’t even get home until almost 11:00 pm.

As I drove home from the City, though, I realized that if I set the intention to get straight to my Going To Bed rituals immediately after walking in the door, I had a chance of actually getting to bed by 11:30!

I felt so optimistic and hopeful!

And I was on track, too, already in my pajamas and just about to brush my teeth, when I realized that I’d left my journal on my desk in the studio.

One of my morning rituals is writing a “Morning Pages”-style brain dump, and I like to have my journal on my bedside table when I wake up, so I don’t have to exit the bedroom — and walk into the studio — in order to get it.

See, one of the ways I stay on task with my morning rituals (meditating, writing in my journal), is by staying in the bedroom and out of the studio.

The second I step into the studio, I am in grave danger of being sucked into something besides my morning rituals. There are just too many juicy distractions in my studio! At that moment in time, the studio is Danger Zone.

The studio is also Danger Zone when my goal is to get myself to bed.

Last night, though, my computer was already shut down, so I figured I was safe from being sucked into a black hole of distractions.

MM was playing on his computer in there (along with our cat, Nika, who was on lockdown, to give her unobstructed access to the litterbox while we’re dog sitting for my parents’ German Shepherd, Chloe — we’ve learned that not putting her on lockdown in the studio on the nights that Chloe is here can lead to cat pee on the kitchen counters in the morning — Not Good), and when I walked in the door he shared some cute and interesting things he’d found on the internet.

Then I noticed the box of new paints that had just arrived in the mail, and it was just too tempting… Just One More Thing Syndrome reared its irresistible head, and before I knew it, I had opened the box, tossed the newspaper padding on the floor, pulled out a newspaper-wrapped jar and unwrapped it.

And then, looking at the pile of crumpled newspaper on the floor, I thought about how nice it would be in the morning to walk in a studio without a big mess to clean up, so why not do that now… Why not do Just One More Thing?

So I flattened out all the newspaper and found a home for it on my packaging materials shelf, so I can reuse it when shipping my artwork.

By this point, MM was telling me he thought it was time to go to bed, which irked me to no end, because I had been in the process of doing that before I got distracted!!

I was grumpily aimed toward the door, arms laden with my aforementioned journal and several other items I’d gathered to take into the bedroom, when I mentioned to MM that I’d like to get his help sometime — not necessarily right now, you understand — unscrewing the sole remaining screw keeping the corkboard-that-I-want-to-remove attached to the wall, it being beyond the limits of my own arm strength to do myself.

“Okay, let’s do it!” enthused MM, and though a voice in my head snarled, “Ahem! It is time to go to bed! We can do this later!” I did not heed it. Instead I let Just One More Thing Syndrome carry the day.

So MM unscrewed the screw, while I used my free hand to keep the corkboard from slamming to the ground.

By this point I was well and truly irritated, stewing in resentment about how late it had now gotten.

The Slippery Slope Into What the Hell Effect

I had blown it, hijacked by Squirrel Syndrome and Just One More Thing Syndrome. It was now officially Very Late, and all my good intentions for getting to bed by 11:30 had been smashed into a million pieces by a handful of distractions.

So I slipped into that dangerous territory lurking around the corner of every failed goal: the What the Hell Effect.

“What the hell,” that voice in my head said, “I’ve already missed my self-imposed deadline to get to sleep, so I may as well take my time now.”

I dawdled. I read the novel that currently has me booknapped while brushing my teeth. I stretched my quads. And when I finally lay my head on the pillow, I kept reading until long past Reasonable Bedtime.

Now I was underslept and annoyed, and it was so much easier to blame MM than to take responsibility!

Lessons from a Former Dating Queen

Thankfully, though, within seconds of waking up resentful I remembered my maxim, developed during my Dating Queen days:

Resentment is anger at oneself, misdirected at someone else, through the lens of victimhood. (Click to tweet!)

In other words, my tiredness this morning was completely and utterly my responsibility.

It would have been so easy to beat myself up, both for allowing distractions to keep me up late, and for wanting to blame MM for it, but I’ve learned from experience (and research has proven) that this is not just not helpful; it’s counterproductive.

Instead, I turned (once again) to my Golden Formula:

I acknowledged my feelings of frustration and sadness.

I reminded myself that I’m only human, and that everyone stumbles, everyone succumbs to Squirrel Syndrome sometimes.

And I picked up my journal and started writing, to help me gain some insight into how I might do a better job at preventing Squirrel Syndrome from hijacking me going forward.

Programming Myself for Success

As my hand moved across the page, it occurred to me that I could carry over another lesson gleaned from my dating days.

Back when I was dating like a full-time job, on the quest to find my life partner, I realized pretty quickly that I would be a much happier camper if I got better at setting limits. (A few too many unwanted good-night kisses will do that to a girl!)

When I was in the company of a real-life, living, breathing human being, it was all-too easy to slip into Pleaser mode. I wanted to be seen as a Nice Person, and somehow this made it really, really hard for me to set a clear boundary in the moment.

Face it, most of the time I couldn’t even tell what my boundary was! A weird sort of disassociated numbness would set in, as if I’d been preprogrammed to leave my body. Then I’d get home and think, “Ick! Why the devil did I let that guy kiss me goodnight??”

I realized that I needed to take charge of my own preprogramming!

So before going on a date, I’d prepare in advance, asking myself questions like:

How far do I want to go with this guy?

Do I want to kiss him goodnight?

What’s my limit? Where am I going to draw the line?

What am I going to say and do in order to communicate that line clearly?

It may sound ridiculous, but it was the only thing that actually worked! I finally learned how to set limits!

And because I knew that no amount of preplanning would ever prepare me for the randomness of real life, I also created a general-purpose mantra to have on hand at all times on any date:

When in doubt, the answer is no.

(Which, by the way, is a great mantra for many aspects of life, not just dating! Though I’m also a big believer in yes, too. The real trick is knowing when to say which.)

Conclusion: Say It Out Loud

As I wrote in my journal this morning, it occurred to me that I can use my Dating Queen strategy to armor myself against potential distractions in the same way that I used to prepare myself for dates,

Last night, for example, before even opening the door to the studio I could have said, out loud, to myself and to MM, “I’m going to bed now. I’m just coming in here to pick up my journal.”

I had formed this intention in my head, but I have a feeling that vocalizing my intention out loud will help to make it more concrete and easier to latch onto. Plus it will make it easier for others in my life to act as my allies!

If I had said to MM something like, “I really want to get to bed, lights out, by 11:30, and I could use your help to not get sucked into distractions,” I bet he would have been happy to help.

So that’s the new tool I’m working on to help armor myself against Squirrel Syndrome and Just One More Thing Syndrome:

Say It Out Loud.

I’ve been using it like a new toy, actually, trying it out in email (“I’m just going to see if that client got back to me about her ketubah proof. I am not going to open any other emails, and I am going to close out my email box as soon as I’ve checked.”) and Facebook (“I’m going to go straight to the doc I want to edit in the Creative Ignition Circle group, and will avert my eyes from everything else and close the tab as soon as I’m done editing.”)

It’s helping. Give it a try yourself and let me know how it works for you!

And don’t forget a liberal dose of my Golden Formula when you invariably stumble. Remember, self-awareness + self-compassion = the key to everything good!