I started writing this through a lens of back spasm pain. I was sitting at my computer, and except for being tired (as usual) from staying up too late (as usual), I was feeling pretty okay.

Then wham. Sudden spasm up and down the entire right side of my back. You know those big muscles that parallel your spine (the name of which I really should know, since I did go through basic anatomy during yoga teacher training…)? Yeah, that one, on the right. Oy.

Suffice it to say that this week, this sits squarely in the What’s Hard category. A back spasm, and a gig in a few hours. Not good.

My chiropractor was fully booked all day with a hard leave-by time, so no help from that arena. However, my fantabulous samurai massage (ie, serious deep-tissue massage) guru, Cindy, who was just about to leave for the day, was available for one more massage.

I’ve been saying for ages that when money isn’t so tight the first item on my agenda is to book regular massages with Cindy, who makes me quite literally groan and sometimes even cry in pain (“what is going on in that room…?” the people in the waiting room must wonder), but who has solved many an “unsolvable” physical problem, starting with a torn hamstring a few years back.

Once again I’m reminded that things frequently don’t change or move much until the Universe whacks me upside the head with a 2×4.

Have I been wanting regular massages with Cindy? Hell yes!

Have I been getting regular massages with Cindy? Hell no. Because they cost $80 a pop, and money’s tight, and I’m highly, highly motivated to pay down my mountain of debt as soon as possible, rather than growing it any higher.

But sometimes the Universe decides that it’s time for you to shell out $80 for a much-needed massage, goddammit, and so you do.

Or at least I did. And though I’m not totally up to par, I am dramatically better. Maybe even enough to attempt to varnish my naked toenails. (Must look the diva part, after all!)

But on to other things. Though it’s always hard to come back to real life after a week at music camp, there are lots of things going well.

On Tuesday: what a wonderful interview with Michael Nobbs of Sustainably Creative! I want to put him in my pocket and take him home. I learned a lot. Great addition to my Thriving Artists Project. (Sign up here to get on the advance notification list.) 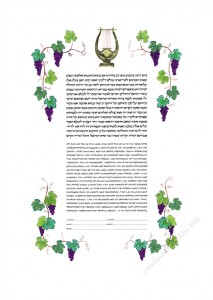 Which I’m posting here again, even though it already appeared in yesterday’s post. Finished it in time, got it scanned (next up: adding it to my line on Ketubahworks), and most important, the clients were happy. Always a great sense of accomplishment.

I played my ukulele every day, and even found myself in The Zone once or twice, experimenting and discovering, and just having fun. This is good!

Plus, after a dry spell of several months I started writing a new song. We’ll see if it evolves — I seem to be accumulating several unfinished ones.

The important thing is that I’m back in the mode of thinking about music, rather than having it be sitting untended on the back burner.

Robert, whom I’ve never met, sent me a link to a TEDx talk by Verity Price, which inspired the hell out of me. (Thank you Robert!)

What a score it would be to interview her for my Thriving Artists Project! I sent an email, but no response yet. Ah, well. I’m still inspired.

After my bout of 80-hour weeks before and between music camps, I’m enjoying a somewhat more relaxed pace, taking time for friends, allowing Happiness to take the wheel for awhile, while Greatness takes a breather.

Aside from the aforementioned back spasm, it’s the usual hard stuff around here: too much to do, and not enough time to do it. Plus, oh yeah, money. (Which is, in fact, dramatically better than last year at this time, but until I get this debt paid off I’m still living like frugal Freida.)

Things are moving way more slowly than I’d like, but then, at least they’re moving. I’m doing my best to take a page from Michael Nobbs’ book, and be kind to myself.

And rather than delve further into this pit of kvetching, I’m going to excuse myself to diva-up for my gig.

‘Til next time, over and out.