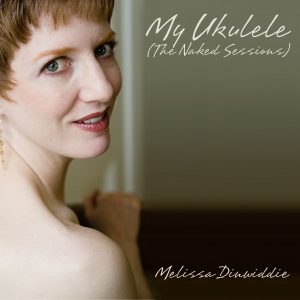 That damn Inner Critic Gremlin is a sneaky beast.

Not only is it a bald-faced liar, but it is a master of disguise. Some of its favorite disguises include:

The Voice of Truth

The Voice of Reason

The Voice of Rationality

When four hours of free studio time landed in my lap late last year, I didn’t let my Inner Critic Gremlin stop me from taking advantage of it and recording 7 original tracks of me and my ukulele.

I didn’t even let my Inner Critic Gremlin stop me from getting the tracks mixed and mastered.

But then my Inner Critic Gremlin, disguised as the Voice of Rationality, convinced me that I needed to hold off on releasing my music into the world.

“And,” it continued, “if you’re going to go through the trouble of adding more instrumentation, you really should wait until you have a full CD of 12 or 15 songs. And really, you need to find a producer to collaborate with on the arrangements. And since a producer/collaborator and more musicians means more expense, that means you’ll need to run a Kickstarter or IndieGogo campaign to fund it.”

It all sounded so… rational!

The thing was I didn’t have time or energy or “bandwidth” to deal with finding a producer/collaborator or running a fundraising campaign. Which meant putting my music out into the world would just have to wait.

But wait, I thought. These stripped-down tracks are the perfect thing for my vision of a UkeDiva.com website, with tutorials of all of my ukulele songs! Maybe I ought to just release them as-is…

To which the voice that I thought was the Voice of Rationality replied:

“Ah, yes, it’s a great idea to make these tracks part of your UkeDiva.com ukulele-tutorial-website vision… but really, you should wait to release the songs until the website is built….”

And of course, I didn’t have time or energy or “bandwidth” to create my dreamed-of UkeDiva.com website, either (that one’s been off the stovetop for over a year, relegated to the fridge for now). Which meant, once more, that putting my music out into the world would have to wait.

This went on for eight months!

The thing about the Inner Critic Gremlin is that once you’ve seen through its disguise, it’s much easier to roll your eyes at it, kick it out of the proverbial driver’s seat and grab the wheel again yourself.

Aha, thought I, all of these reasons for not putting my music out into the world are really not rational at all!

I had a little talk with my Inner Critic Gremlin. Then I sent it off to get a pedicure while I uploaded my music to my music website, melissasings.com, where you can find it now (and where hundreds of people have already listened and/or downloaded — it’s “name your own price,” guys!).

Yes, the Inner Critic Gremlin had possession of the driver’s seat for 8+ months, but I unmasked it in the end. The sales I’ve made, and the emails and tweets that I’ve received from appreciative fans have touched my heart, and motivated me to record more music and get it out into the world!

@a_creative_life Uke Diva, you made my day! Loved the stripped-bareness of it. Uke playing notwithstanding, the "horn" playing is divine.

Where have you unmasked your Inner Critic Gremlin lately?

I’m so glad I’ve learned special Gremlin Training Techniques to adequately deal with Inner Critic Gremlins (even though sometimes it still takes me awhile to recognize mine!).

Gremlin training is an ongoing process, because as long as we keep pushing outside our comfort zone, those Inner Critic Gremlins will keep popping up.

Thankfully, I’ve got a slew of really useful tools, and will be teaching a 90-minute Gremlin Training Lab in the not-too-distant future. Sign up for my insiders newsletter to make sure you get notified when I offer the class!