See, fantasizing about something does not make it come true. Unless you take action. And that means taking action even when you’re scared or filled with self-doubt, which I definitely was!

The truth is, I’m comfortable onstage now only because I didn’t let my initial terror of being onstage stop me.

How I Became a “Natural” Performer

Like so many things that look “natural” from the outside, performing is a set of learned skills that take lots of practice to get good at (at least it has been for me!) In addition to learning to control my voice (and believe me, I’ve worked hard on that for years!) and how to play an instrument (ditto), I’ve had to learn a ton of different skills, including:

And although these days most of my performing is done solo, I’ve done a lot of singing with accompanists and bands, so I’ve also had to learn:

Honestly, that’s probably just scratching the surface of all the skills I’ve worked hard on over the years as a performer, and believe me, these skills did not all come at once, nor did they come quickly. And I definitely wasn’t born with them!

The first solo performance I can remember was a piano recital when i was maybe six or seven. I played The Teddy Bears’ Picnic in front of a crowd of parents and siblings, that might have been only 40 people (I honestly can’t remember), but felt like a stadium.

I have a vivid memory of standing offstage at the Woman’s Club of Palo Alto, clutching my sheet music in my sweaty little hand, my heart threatening to pound its way out of my chest. The walk across the stage to the bench on the other side of the grand piano seemed like it stretched for miles!

I couldn’t imagine anyone actually did this kind of thing for fun. It seemed like cruel torture to me.

With seven years of piano lessons, and viola lessons after that, there were a lot of yearly recitals! I never stopped feeling scared of them, either, though my nerves were never quite as bad as that first time.

The fear doesn’t every fully go away; you just get used to it.

Let me modify that a bit: for specific things, the fear actually does go away. But any modification of what I’ve grown used to brings the fear flooding right back.

Leading services at my synagogue, for example.

In my late twenties I joined a small, lay-led synagogue where Shabbat services were led by members, rather than by a rabbi. Our services had a lot of singing, and when the people in charge figured out I could carry a tune, I was recruited to lead Friday night Shabbat services periodically.

I was flattered, for sure, but the prospect terrified me!

Not having grown up going to synagogue, I didn’t know the songs and prayers — many of which are in Hebrew, a language I’d never spoken — so I had to learn the entire service from cassette tapes (yes, this was back when I had a car with a tape player!) Even after drilling and practicing for weeks, I was so scared I was going to mess up!

At the first service I led, which couldn’t have had more than fifteen or twenty people in attendance, I was right back where I’d been before my first piano recital: dry mouth, sweaty palms, the whole nine yards.

Over a few months of leading services, the nerves gradually calmed down, and what had once been terrifying started to feel, well, normal.

I even discovered that messing up (which I did indeed do on several occasions!) did not cause lightning to strike.

(The best way to deal with a mistake, I found, is to acknowledge it with a bit of self-deprecating humor. Everyone laughs, and relaxes, and it endears the audience to you.)

So yes, I stopped being afraid of leading Shabbat services!

But then my little synagogue decided to run our own High Holy Days services, and I was tapped to help lead the rounds, which meant instead of sitting in a circle with fifteen or twenty people, I was up on stage in front of two or three hundred!

Can you say “butterflies”?

Once again I was shaking and breathless with fear (which, in case you’re wondering, makes it really hard to sing!)

Now, however, over twenty years down the road, I lead entire three-hour services and I don’t bat an eye. After years of doing it, it’s become the “new normal.”

But when I had to learn an entirely new (to me) set of melodies for the prayers a few years ago, hello stagefright!

Then coming up on eleven years ago I started taking jazz singing classes at a local community college. By this time, leading services in synagogue was old hat, so it astonished me how knee-knockingly nervous I was to get up and sing in class or at a jam session.

Two or three nights a week I’d get to do a song or two with the band at a local restaurant, and it took months for me to stop shaking and get comfortable singing there. But eventually that became normal, too.

And then one night the entire gang from the restaurant moved to a different venue for a holiday party, and the same old terror was back in spades! I couldn’t understand it — the band was the same, the audience was the same; the only thing different was the room! But that was enough to throw me.

It seems clear that fear dissipates as things become familiar. When anything new is thrown into the mix, however, the butterflies may start kicking into overdrive again.

A Universal Cure for Stagefright?

Probably the best thing I’ve ever done to combat stage fright is to start studying improv theater a couple of years ago.

In improv, we make everything up on the fly. Scenes, songs, entire unscripted plays. It’s crazy scary at first, but what I’ve noticed is that doing improv has dramatically mellowed my  performance fears.

Because fear dissipates as things become familiar, and improv is all about hanging out in the unnown, it makes sense that I’d be less fearful of the new and unknown: dangling in a space of uncertainty has become familiar to me!

Whatever that thing is you’re scared of, don’t let fear stop you. Feel the fear and do it anyway, as the 1987 book by Susan Jeffers put it. The fear is not going to go away on its own, but you can conquer it by leaning into it, and not letting your fear run the show. 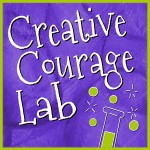 Ready to conquer your own fears? Join me in Creative Courage Lab, a month-long experiment in tiny-and-daily making, sharing, and growing, in the context of the most warm-hearted, generous, loving community you’ll ever meet.