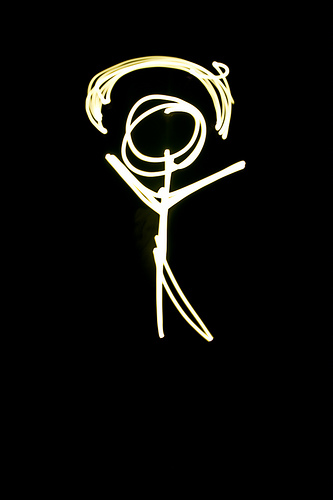 We were chatting at a surprise party, waiting around for the birthday girl to appear. She’d asked me what I’d been up to since we first met — at another party for the same mutual friend five years previous.

There was a lot to catch her up on: starting Living A Creative Life in 2010, co-teaching a creativity workshop in Istanbul last October, leading a creativity retreat this coming weekend, teaching a six-month program in June… It really brought it home that my life has gotten a whole lot more big, bold, and creative in the past five years!

That was what prompted her “I’m not creative” pronouncement.

I smiled. “Everyone’s creative,” I said. And, “I’m not particularly good at drawing, either.” Then, “What have you been up to since we last met?”

She’d been laid off from her job doing legal billing, and was having a rough time finding other employment. “They say the economy’s getting better,” she said, “but I don’t believe it.”

I nodded. Because whether or not what “they” say is accurate, the truth is, if you’re unemployed, it doesn’t matter what the national unemployment rate is; for you it’s 100%.

She’s resilient, though. She’s using her unemployment as an opportunity to do things she loves: volunteering at the Humane Society, baking (she loves baking bread!), horticulture (she has a magical green thumb!), and lapidary work (her grandmother did lapidary as a hobby, and bequeathed her a large collection of stones and settings). She’s even found a lapidary club with a workshop just a half hour drive from her home, and she’s been taking classes.

Who knows? Maybe one of these things will somehow turn into a career path. She doesn’t know yet, but she knows she’s not going back to what she did before. Life is too short to spend eight hours a day doing something you hate.

I nodded and smiled again. A beamier smile this time.

As I said before, everyone’s creative. Since when did “creative” become conflated with “can draw representationally”? Why is it that we all use the ability to draw in a “realistic” fashion as our yardstick for creative ability?

Somewhere in school we learn to buy into this story, that “creative” equals “can draw representationally,” and even very clear evidence to the contrary (rock stars, novelists, movie directors, comedians, all up in our face in the media — Steve Jobs, for god’s sake!) doesn’t seem to loosen our hold.

I think of the ten-year-old son of my mom’s cousin who said he “hates art” in school. “Why?” I asked. “Because I can’t draw.”

And yet who knows, maybe he codes video games or writes slam poetry or carves ninja swords out of popsicle sticks like nobody’s business.

Even those of us who create in a visual realm are not immune.

People like me, whose primary skill is not representational drawing, feel inadequate and “not artistic.”

And ironically, those whose skill is representational drawing often feel inadequate and “not artistic” too, hard as it is for the rest of us to believe. “Sure, I can draw what I see, but I’m only a human copy machine,” those skilled drafters lament, “I’m not an artist.”

How about we all agree to start to notice and appreciate the unique gifts and propensities we have, rather than apologizing for the ones we don’t?

You have a green thumb, are exploring making jewelry, and can bake bread from scratch, making your own yeast? Damn, girl, that’s amazing! If that’s not creative, I don’t know what is!

Merriam-Webster’s number one definition for creative is this:

: marked by the ability or power to create : given to creating

And if you click on the word “create,” you’ll find this definition:

: to bring into existence

Hello! Do you hear that? When there was nothing, and now, through your efforts, there’s a garden, or a loaf of bread, or a necklace, that is your creativity being expressed.

The truth behind “I’m not creative” is that it’s a lie. A story we tell ourselves. A self-installed glass ceiling.

Time to shatter it, baby.