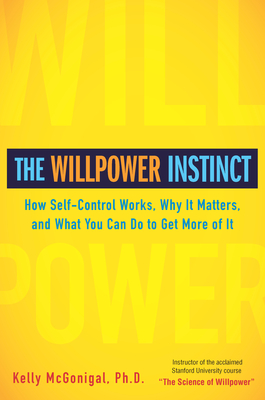 There’s such great stuff inside, this book should be required reading for any creative. (In fact, I’m thinking of creating a online course/study group/support group to dive deeper into the book, but that’s down the road…)

Anyone who has a calling to create faces a daily choice about whether to spend their limited time and energy on what really matters to them… or on the bazillion other things that pull on their proverbial sleeves. With so many distractions in our lives, learning to boost and leverage willpower is an essential skill.

In one of the early chapters of the book, Dr. McGonigal looks at why we keep putting off the thing we really want to do. (Sound familiar?)

You know how most exercise equipment people buy ends up gathering dust? Well, two marketing professors were curious about the mistakes consumers make in predicting how much they’ll use their exercise equipment, and decided to study this phenomenon.

They asked a whole bunch of people to predict, “How many times per week (on average) will you exercise in the next month?”

Then they asked a whole bunch of OTHER people the very same question, but with one important preface: “In an ideal world, how many times per week will you exercise in the next month?”

Turns out that everyone assumes an ideal world — the groups’ estimates were no different.

We look into the future and fail to see the challenges of today. This convinces us that we will have more time and energy to do in the future what we don’t want to do [and I would add — what we want, but are not quite yet willing or ready to do] today. We feel justified in putting it off, confident that our future behavior will more than make up for it.

It gets more interesting, though.

Nope. When the experimenters gave people the explicit instructions, “Please do not provide an idealistic prediction, but rather the most realistic prediction of your behavior that you can,” those people showed even more optimism about their behavior and reported the highest estimates yet!

Not surprisingly, when the researchers invited these optimists back for a reality check, they reported that the number of times they had actually exercised was lower than predicted.

“People had made their predictions for an ideal world,” writes McGonigal, “but lived through two weeks in the real world.”

And it doesn’t stop there. McGonigal continues:

The experimenters then asked these same people to predict how many times they would exercise in the next two weeks. Ever the optimists, they made estimates even higher than their initial predictions, and much heigher than their actual reports from the past two weeks. It’s as if they took their original predicted average seriously, and were assigning their future selves extra exercise to make up for their ‘unusually poor’ performance. Rather than view the past two weeks as reality, and their original estimates as an unrealistic view, they viewed the past two weeks as an anomaly.

In other words, people use positive expectations — optimism — to justify present inaction.

Thankfully, there are tricks for handling the down side of optimism.

Behavioral economist, Howard Rachlin, offers one: when you want to change a behavior, aim to reduce the variability in your behavior, not the behavior itself.

Rachlin did studies with smokers, asking them just to try to smoke the same number of cigarettes every day, not to try to smoke less. Guess what? Those smokers actually decreased their overall smoking.

Rachlin argues that this works because the smokers are deprived of the usual cognitive crutch of pretending that tomorrow will be different. Every cigarette becomes not just one more smoked today, but one more smoked tomorrow, and the day after that, and the day after that. This adds new weight to every cigarette, and makes it much harder to deny the health consequences of a single smoke.

So how does this apply to your creative thing?

Just this: aim to reduce the variability of your creative practice. Instead of asking “Would I rather do this today or tomorrow?” ask yourself, “Do I really want the consequences of always putting off my passion?”

Then let me know how it goes.

Tell me, how will you apply this willpower lesson to your own life?

If you’re ready to stop putting off your passion, join me in my program for women, Time to Glow, starting May 24.

We’ll cover more tools for turbo-charging your willpower, for moving forward despite fear & doubt, for taming that Inner Critic Gremlin grumbling away at you that “you’re not good enough” or “you don’t deserve to create” or “everything/everyone else is more important,” and a whole lot more.

If you’re ready to create what’s calling you to be created and share it with the world before it’s too late, click here to join a circle of amazing, generous, warm-hearted women. We’re waiting to welcome you.

Early bird pricing ends at 9pm PDT tonight, May 11. Click here to learn more about the program and to take your place in it.