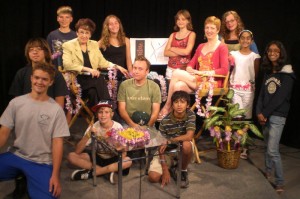 Sometimes the Universe gives you a clear message you’re on the right path. Like having a TV interview fall into your lap.

Sometimes, though, the Universe also likes to throw obstacles in your way, perhaps to make sure you’re really committed.

That’s me in the photo above, on the set of Colorful Journey of Success at KMVT, with host Clare Mullin, and the amazing crew of middle school kids in the Studio Production class (led by the phenomenal Bobbie, in the green T-shirt). Clare called out of the blue last week to see if I’d like to appear on her show to talk about my success as an artist/performer, and to sing a couple of songs. What fun!

I was delighted to have the opportunity, and took it as a sign from the Universe that getting myself out there as a performer is the right path for me to be on.

But the Universe has a sense of humor, and apparently it needed to test my mettle a bit.

Last month was the 20th anniversary of the Americans with Disabilities Act. As a healthy yogini, and a super-active person, the significance of this piece of legislation is not normally at the forefront of my consciousness. However, it certainly was this week, when I had a taste of what it’s like to be disabled.

Monday morning I woke up with a bruised, sore, lay-on-my-side-too-long feeling in my right hip. Sitting at my computer I had to acknowledge that I was not just in discomfort; I was in pain.

The next day I woke up and had difficulty rolling myself out of bed. Getting in and out of a chair (or using the toilet!) made me feel like an arthritic centenarian.

What was going on?

Suddenly, and without warning, I was, I had to admit it, pretty disabled: I quite literally wasn’t able to do things I normally do without any thought.

Here I was scheduled to be interviewed and perform on local TV at 10am, and I wasn’t sure if/how I was going to manage it!

I was filled with new appreciation for people like Jon Morrow, Associate Editor of Copyblogger (among other things). Jon first came to my attention through a great interview in Question the Rules (affiliate link), and he has been on my mind a lot lately thanks to a series of excellent videos about building a popular blog through guest blogging. Jon has dealt with significant physical challenges his entire life, but has not let that stop him from achieving phenomenal success in a number of different fields.

If Jon could sell multi-million dollar homes that he couldn’t even get inside with his wheelchair to see, I could get myself to and through a local TV appearance, goddammit!

So despite the pain, I hobbled to my car, loaded up my guitar and a bunch of my artwork, and shlepped the few blocks over to the studio.

One unexpected side benefit of my mysterious disability was that the interview [I’ll post the video clip when I have it — join my music mailing list if you want to be the first to know when the show is aired], which was going to be broadcast live, ended up being taped instead, to allow the image to fade to black while I wrestled and grimaced my way out of my chair in order to perform standing with my guitar. And again when I wrestled and grimaced my way back into my chair afterwords. A small silver lining, though I would have preferred to do the show live and be pain free.

I got through the TV appearance, and drove straight to my chiropractor, but my head was spinning. Thanks to the worrying gene I inherited from my mother, when something scary and out of the ordinary like this happens, my mind has a tendency to jump to scary places.

What if this pain becomes permanent?

What if it turns out to be some awful tumor or something?

What if this is my life from now on?

This was a test, this was only a test

Thankfully, after a full suite of (loud and painful) adjustments, some ibuprofen and a day of babying, my hip is significantly better. It was apparently just a mysterious muscle inflammation. I’m moving around a lot more easily, and even got through a full yoga class yesterday (though pigeon pose was excruciating — clearly the piriformis is involved.)

But the entire episode was yet another little smack upside the head from the Universe: a great reminder that if I have goals I want to manifest, there’s no time like the present.

Maybe if I pay attention now I can avoid what inevitably comes next: a major crisis; a resounding whallop upside the head with a 2×4.

Time to get serious and refocus on what I really, really want. Again.

After my enthusiastic reception when I performed at Jazz Camp West and CCMC, and at Saturday’s Ladies of Jazz concert, I’m realizing that I want performing to be a big part of that picture. I had put my music on the back burner during my Great Financial Panic of Early 2010, in deference to other pursuits that seem like more likely money-makers.

But hell, you only live once, and god only knows for how long. And I really want this performing thing. I don’t even know exactly what it’s going to look like (people have been referring to my “stand up routine,” and although I’ve never, ever thought of myself as a stand up, suddenly I’m looking at that picture and really liking it), and I realized just today that I’m scared sh*tless of biggifying.

But fear be damned. The Universe does not send enthusiastic new fans and accolades and CD sales and TV interviews when it wants you to let something lie fallow.

I’ve been given a mission, and I intend to follow it through.

I even made a couple of baby steps forward:

• On Tuesday I entered a couple of music competitions for the first time in my life.

• Yesterday, after a friend introduced me via email to a jazz radio DJ in Denver, I sent off CDs to Jazz 89 KUVO/KVJZ. (I mean duh, right? Somehow my fear of biggification had me so blocked that the very concept of sending my CDs to radio stations was simply not appearing on my radar.)

Next up: researching other stations to send my CD. Jazz and/or comedy shows would be natural targets, as well as shows having to do dating and relationships. (Got suggestions? Leave them in the comments below.)

I’m also committing to getting out to open mics, at least one a week — starting next week — to workshop my act, meet other Bay Area performers, network and just get myself out there.

So there you go: Melissa’s new path re-adjustment for the second half of 2010. I’m going for it. Not exactly sure how, but I’ll shape the picture as I go along.

What are you going for?