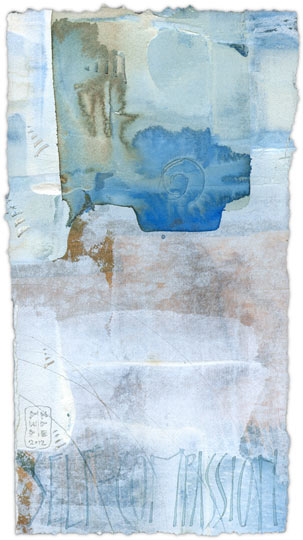 I’m still in the woods, totally unplugged and swingin’ in the trees at Jazz Camp West, so I asked my robots to repost this classic from the archives, originally published June 10, 2012. It seemed especially timely, because I sent a note with the gist of this message to the members of Your Big, Bold, Creative Life Academy just a few days ago.

Here’s the background on this one:

Periodically I’ll get a flurry of email from people dealing with a lot of anger. Anger at themselves, for not running full-steam-ahead after that creative calling they long for.

Ah, yes. I know that place well. It is so easy to beat ourselves up, isn’t it?

But beating ourselves up is never the answer.

Here, then, is an open letter to anyone out there feeling stuck, longing to follow those creative callings but seething with anger at yourself for being bogged down by inertia, busyness, or anything else.

Oh, how I understand it!

In my own life there have been stretches, two in particular that were each over a decade long, when I also wasn’t feeding my creative spirit. Sometimes because I’d stuffed her so far at the back of the closet that I didn’t even know she existed. Sometimes because I was only too aware she was there, but I just “didn’t have the time.”

Because, as one of my teachers, Patti Digh, puts it, “We make time for the things we care about. We do.”

Except that I wasn’t making the time for the things I cared about. And much as I wanted to blame it on circumstances, I think part of me must have known that it wasn’t really circumstances, it was my stuckness.

Making time for my creative things was my responsibility, and mine alone.

But realizing that made me angry at myself. So I beat myself up. Just like you’re doing.

Because I wasn’t making time for the things I cared about! And was soooo angry at myself for that. I took that anger and molded it into a torture chamber of tools to beat myself up with. Nasty, blaming, belittling voices that delighted in lashing, whipping, lacerating and pounding me.

“You’re lazy!” the voices would yell. “What is wrong with you? Buck up! Just do it!”

And “You’re a loser! You’ll never amount to anything!”

With a dose of “You’re not good enough! You’ll never be good enough if you don’t do something!” thrown in for good measure.

Surely I needed to be whipped into shape. Maybe if I lashed myself hard enough (I thought), I’d finally get up and run after my callings.

Except that it didn’t work.

Another day would go by, another week, another month, without me setting foot in my studio to make stuff.

Which, of course, only made me beat myself harder.

What a painful, vicious cycle!

The truth is, I wasn’t lazy at all — I was scared. There were demons galore scaring the bejeezus out of me, and then sneakily telling me that there was nothing to be scared of, that fear had nothing to do with it.

Those demon voices — the voice of self-criticism and self-doubt — I refer to as gremlins, and here’s the truth:

Gremlins will stop at nothing to keep you in your comfort zone, and they never go away.

Understanding that was a big part of my being able to finally free myself from the bog of stuckness. To stop waiting and get creating.

Another big part, equally important, was dropping the whip.

But if you’ve ever trained a dog, or a horse, or any creature, you’ve (hopefully) seen how unhelpful the stick is for ongoing motivation. A creature that gets nothing but beatings never trusts enough to let go, to love, to be authentically itself and thrive.

That goes for your creative spirit, too.

Just like kids, and dogs, and other warm, furry (or not) creatures, creative spirits thrive on love and positive attention. And the latest brain research has proven that human beings are dramatically more likely to stick to their goals when they treat their failures with self-compassion and forgiveness. Click to tweet this!

“The brain, it turns out,” writes Kelly McGonigal in her excellent book The Willpower Instinct*, is especially susceptible to temptation when we’re feeling bad.” She elaborates:

If you think that the key to greater willpower is being harder on yourself, you are not alone. But you are wrong. Study after study shows that self-criticism is consistently associated with less motivation and worse self-control. It is also one of the single biggest predictors of depression, which drains both “I will” power and “I want” power. In contrast, self-compassion — being supportive and kind to yourself, especially in the face of stress and failure — is associated with more motivation and better self-control.

I know it sounds counter-intuitive, but I invite you — I challenge you — to try self-forgiveness and self-compassion. After all, what you’ve been doing so far hasn’t been working so well for you, has it? You may as well try something else!

While you’re at it, I invite you — I challenge you — to make your goals for yourself teeny, teeny, tiny.

Wait — let me clarify: make your dreams as big as you can. Don’t put a glass ceiling on your dreams! But make sure the goalposts on your way to get there are the tiniest bites possible. Ridiculously achievable. Teeny little baby steps, so tiny that you can’t possibly fail. (15 minutes a day in the Creative Sandbox, anyone? Or maybe 10 minutes, or 5, or even one!)

And remember: because you’re human, you will fail. We all do. But I’m taking that whip out of your hand. You get to pick yourself up, dust yourself off, compassionately forgive yourself, and in the words of the brilliant Cindy Lu, correct forward.

Forgiveness, self-compassion, and one teeny, tiny baby step at a time.

Try it, and let me know how it goes.