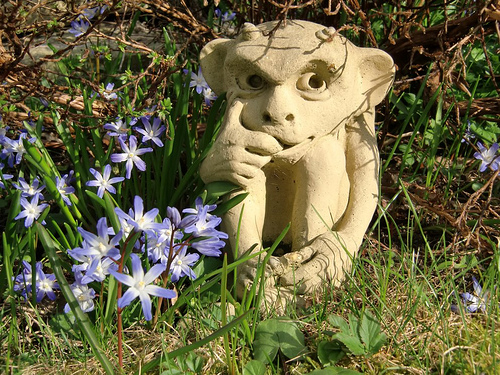 One of my favorite parts of Tara Mohr’s Playing Big program* so far is the notion of the Inner Critic.

If that name alone didn’t bring up a clear picture for you, let me flesh it out a bit.

It may manifest as the voice that tells you “you’re not good enough,” or “you’re not ready for this.”

Or the voice of “who are YOU to think you could do that?”

Or the voice of “THEY are so much better than you; you might as well just give up.”

Basically any self-doubt message that keeps you stuck — that’s what Tara would call the Inner Critic.

Havi calls these voices monsters (her Monster Manual* is the niftiest guide I know for learning how to talk to those monsters). I’ve taken to thinking of mine as gremlins (which somehow seem smaller and less threatening to me than monsters, but that’s just me).

We all have these critical voices. In fact, they’re wired into us as human beings. (That’s right — if you were thinking you were alone in having gremlins/monsters/an Inner Critic, you are very much not alone.)

Way back in human pre-history, trying something new, making yourself visible — say, by standing alone out on the velt — had a good chance of getting you eaten. Our brains evolved to keep us safe, to avoid anything that might make us likely to become a saber-toothed tiger snack (and hence not pass on our genes to the next generation). And even though the threats we deal with now are NOT saber-toothed tigers, to our primitive lizard brains, they might as well be, because it can seem just that scary.

The problem, of course, is that the kind of thoughts that evolved to keep us safe and alive can also keep us stuck and playing small.

Making a painting, or writing a play, or speaking in public are actually not likely to get us eaten, but the lizard brain doesn’t know this. All the lizard brain knows is “new=scary” and “standing out=dangerous” and “playing big=NO FREAKIN’ WAY!”

With the best of intentions, the lizard brain tries to keep us safe by speaking in the voice of the Inner Critic Gremlin (or monster, or whatever you want to call it). And that leads to NOT following the dreams of our hearts, which in turn leads to a lot of unhappiness and frustration when we live lives of of settling, instead of going after the lives we really, really want.

Thanks to Tara and Havi, along with a bunch of other resources and teachers (combined with a lot of self-work), I now know 7 ways to recognize my Inner Critic Gremlin.

I know how to distinguish my Inner Critic Gremlin from realistic thinking.

I know over a dozen different specific tactics for talking to my Inner Critic Gremlin.

And most important of all, I’m practicing hearing my Inner Critic Gremlin’s voice without taking direction from it.

(This is important, because I hate to tell you this, but that voice is NOT EVER going to go away. In fact, the bigger you play, the louder the Inner Critic Gremlin tends to get.)

I managed to sneak by my Inner Critic Gremlin and write my upcoming 19,000-word ebook, Creating Happiness: 9 Essential Secrets for Creative People ([subtitle currently in process]). But when my publisher, Tanner at Aspindle, asked if I’d like to design the cover, possibly incorporating some of my artwork, my first thoughts were “Me? Design the cover for a book that I want to stand out on the virtual shelves of the Amazon Kindle store? Are you kidding? There’s no WAY I’m up to that task!”

“I’m not a Graphic Designer!”

“My art isn’t nearly graphic and ‘poppy’ enough to do a good job.”

And yet I didn’t recognize it as the Inner Critic Gremlin at all! As far as I was concerned, these thoughts were nothing more or less than The Truth.

Which is, as you may have guessed, one of the Inner Critic Gremlin’s sneakiest tricks: to masquerade as The Truth.

The Power of Mirrors

Thankfully, the story didn’t end there. When I wasn’t entirely thrilled with the mockups that my publisher came up with, I did decide to try my own hand at some designs. But did I pull out some of my artwork, or sit down to use my hard-earned skills as a calligrapher and hand-letter a title?

I still didn’t give credence to the possibility that my own artwork might be up to the task. Somehow, I had it in my head that my book cover had to have a certain slick, modern look, which (I reasoned) only a professional photo could provide.

So yes, I cranked out a handful of cover mockups… which all used stock photography, and ended up looking so generic and bland that none of my personality shone through at all.

I had a vague sense that none of them was quite “it” yet, but it wasn’t until I sent an email polling my wonderful audience of subscribers for their opinions that I finally woke up. I thought I would just get some help picking which one of the covers to use. What I ended up getting was a kick in the pants, right when I needed it most.

“Your covers need more love!” said one email in reply.

“I think your art speaks volumes…why wouldn’t you put your own work on the cover?” said another.

“I wish you would have been able to incorporate some of your personal art into the design.” said yet another.

And another: “You have such insight and wit, and I think the book cover should show it… I don’t think any of these covers do you justice.”

My subscribers mirrored back to me what I already knew myself, and suddenly I saw, clear as day, that what I’d believed to be “The Truth” was nothing but the voice of my Inner Critic Gremlin, trying to keep me small and safe.

Not only did this exercise teach me a lot about how very sneaky my Inner Critic Gremlin can be, but I learned some other valuable lessons as well:

My peeps are not just generous, thoughtful and super-smart, they also really believe in what I’m doing and want to see me succeed. (This is, of course, what anyone building an audience is going for, but validation is always a wonderful thing.)

If you’re creating something you hope will make a difference in the world, getting feedback in advance from the people you’re hoping to impact is a really good thing (because you can then make new iterations that will be even better), and is ultimately less scary than avoiding potential criticism altogether until after your thing is born (when it’s too late to make improvements or changes).

In the case of my cover design, I got feedback from a slew of folks (a sort of mini-version of “crowdsourcing”). In the case of the book itself, I’ve been working with an editor. (Note: This is not the same as “designing by committee,” which is notorious for resulting in crap. The creator needs to hold onto her Big Vision during the iterative process. Not always an easy line to walk. And a big enough topic to be worthy of its own blog post [or several].)

Now when Creating Happiness finally actually comes out, I won’t be pushing it off a ledge into the utter unknown. This doesn’t mean that everyone will like either the cover or the content. You can’t please everyone, regardless of what you do. But at least I’ll know that the cover rings more true of ME for the people on my list (and me!) than it would have otherwise, and that’s nothing to sneeze at.

Meanwhile, one of my supremely talented subscribers offered his services to help me design a better cover, which has led, quite serendipitously, to a very exciting collaboration, and a new direction for a cover design which uses my artwork, and which I’m actually excited about!

You never know what good things will result from putting yourself out there.

Now I’m off to work on the artwork for that new design… (Want to be the first to see it, and possibly to weigh in with a vote of your own? Be sure to subscribe to the blog if you haven’t already!)

Where have you taken direction from your own Inner Critic Gremlin?

*And yes, those asterisked links are affiliate links, in case you’re wondering, and (sarcasm alert!) could potentially send gobs and gobs of money my way, no doubt enough to pay off all my debt, remodel my kitchen and replace my windows. Though the Playing Big program is currently closed, so all you’ll find there is a sign-up form. Which I think will pay me a commission if you sign up and later buy the program. Though I’m not 100% sure about that. Just sayin’.