Let me ask you: How many times have you looked at something you wanted — an item, a class, a trip — and said to yourself, “I can’t afford it”?

How many times have I done that? Yeah, that would be a lot…

I’m working on changing that, though. I want to be more accurate with my words. Is “I can’t afford it” really what I mean? Is it really what you mean?

Most of the time, I’d wager it’s a convenient excuse.

“I can’t afford it” is hard to argue with. It’s an all-occasion excuse to have in your pocket which few people will challenge you on.

But even in that situation, I’d argue that “I can’t afford it” is not entirely accurate.

When I have a little money, I buy books; and if I have any left, I buy food and clothes.

More contemporaneously, metal artist John T. Unger disclosed to me in an ArtEmpowers (formerly Thriving Artists Project) interview that even when times were really tough in his world, he often used what little money he did have to buy art, before paying rent. He figured if he didn’t buy the art now, it wouldn’t be available later — it was now or never. And he trusted that he’d figure out how to scrape up the cash for the rent… or if not, he could just crash on someone’s floor.

Not all of us are willing to put books or art before food, clothing and shelter, but these examples illustrate a point:

The truth is, unless you are truly destitute and without resources at all, if you want something badly enough, if it’s really a top priority for you, you’ll find a way to afford it.

If you pass on it, you might use the excuse that you “can’t afford it,” but the truth is really that you’re choosing to spend your money elsewhere.

This is not a bad thing. Or a good thing, for that matter. It’s just a thing. And it’s a thing that I think we’d all do well to be mindful of.

I once had a client tell me they “couldn’t afford” a course for which I was charging $337, then tell me in the next sentence that her father had just bought her access to a $2,000 program, and another family member offered to buy her access to a different course that cost $500.

This client may have had very little income and a whole lot of expenses, but clearly the real reason she decided not to buy my program is not that she “couldn’t afford it,” but that her priorities were elsewhere.

Fine. I have no problem with that. Let’s just be honest about it.

What “I can’t afford it” really does

Saying “I really want it, but I can’t afford it” is denying agency for your decision. It’s an easy excuse, but a disempowering statement. It reinforces — to the Universe, and in your own consciousness — that you are a victim of circumstance.

Saying “I really want it, but I’m choosing to put my money toward paying off credit card debt instead [or shoes, or new windows, or a lifetime supply of Ben & Jerry’s, or whatever]” is a way to take control of your decision.

“I choose to spend my money elsewhere” = agent

What “I can’t afford it” really means

There’s something else that we’d all do well to be mindful of when it comes to “I can’t afford it.”

Sometimes “I can’t afford it” really means “I’m choosing to spend my money on other things,” yes.

But sometimes there’s something deeper going on here.

Sometimes, underneath the mask of “it’s too expensive, I can’t afford it,” is the pain of “I don’t feel I deserve this.” (Click to tweet this!)

Sometimes “I can’t afford it” really means “deep down, I want this, a lot, but I can’t possibly give it to myself.” (Click to tweet this!)

Saying something is “too expensive, I can’t afford it” can be another way of saying “I’m not worth it.” (Click to tweet this!)

I see this a lot when it comes to anything that could be categorized as “self-care.” We’ll spend thousands on something that promises a healthy return on investment for our business, but self-care? That’s a “luxury.” That’s “frivolous.” That’s “I can’t afford it.”

Never mind the fact that this very self-care may offer exactly what you need to finally inhabit the self you need to be to make that damn business blossom!

Remember: YOU are the most important asset you’ve got. Self-care is not a luxury, it’s essential. (Click to tweet this!)

I know the “self-care is frivolous & I can’t afford it” excuse only too well. I was a member of the Friends of Calligraphy for seven years before I gave myself the gift of going to the FOC annual spring retreat.

“I have all the time in the world to create whatever I want,” I reasoned. “I’m a full-time artist — I don’t need to go away somewhere to create! Besides, why would I want to pay money and go through the hassle of packing up a small subset of my supplies and driving for 90 minutes to work at a shared folding table when I have a whole studio of supplies and a professional drafting table right here?”

It sounds sensible enough, doesn’t it? But the reasoning was flawed.

Yes, I was a “full-time artist,” but despite all good intentions, I never managed to set aside a full weekend to work on something for me.

Like everyone else, my life was a big tangle of deadlines and to-do’s and have-to’s.

I was so weighed down by the maintenance of my life and business that the want-to’s — the exciting projects I dreamed of doing for love, or to take my business in a new direction — got shelved and re-shelved until they were all but forgotten.

One year, I truly did not have the money to pay the balance I owed on the retreat. I tearily called to cancel two weeks beforehand, but out of the blue, some of my retreat buddies who were in more abundant financial circumstances called me up to tell me to pack my bags, that they had joined forces to cover my costs.

That year I made four new ketubah designs over the course of the four and a half days of the retreat.

To give you some context, previous ketubot had taken anywhere from 30-200 hours to complete, and I hadn’t made a new one in two years.

In fewer than five days I added new income sources to my ketubah business that would bring in thousands of dollars over the next few years.

That was the moment when I realized that the retreat wasn’t just a feel-good self-care extravagance (though it does make me feel good, and it is the ultimate in self-care).

That was when I realized that the feel-good self-care I get on retreat is essential, not “just” for my own well-being (as if that isn’t enough!), but for the well-being of my business, too.

(That spontaneous retreat “scholarship” from my friends is why I feel so strongly about offering flexible funding scholarship seats at my own retreats.)

One year I made a complete book and slip case.

One year I made an entire illuminated alphabet, which has since become multiple ketubah designs in my shop.

One year I birthed my Irresistible Woman line of artwork, and the blog that ultimately spawned this one.

Last year I made eight ArtSparks.

I’ll be honest: I don’t always leave the retreat with something saleable for my business — or even anything close to what I expected to leave with! But I’ve learned to trust the magic of the experience.

I’ve learned that I will get what I need out of it, even if it’s not always what I thought I wanted.

And that container of freedom, even for just a few days, nourishes me so much that I function exponentially better during the rest of the year.

My other “never miss” creative immersion experience is Jazz Camp West, in which 300 jazz instrumentalists and singers of all levels gather together to make music in the woods for a week every June.

Except one year I did miss it. And again, it was the “I can’t afford it” excuse that kept me away.

2009 was the year when I turned a Bad Financial Situation into a Very Bad Financial Situation. You can read the whole sordid tale here, but in a nutshell, when my ketubah business crashed with the rest of the economy in 2008, I “threw a bunch of money at the problem” in a desperate attempt to solve it, and instead got myself deeply into debt (which I’m still paying off).

For awhile I was sure that showing my work in wedding fairs would be the “silver bullet” solution, and with the work and expense of getting ready for the first fair, I simply “couldn’t afford” to go to Jazz Camp.

I was bummed, but hell, it’s not like I was going to die from missing a year of Jazz Camp! It’s just one week, after all — how important could it be?

Well, the week of Jazz Camp went by, and sure enough, I didn’t die, and life went on.

It wasn’t until down the road that I realized the depth of my loss. Jazz Camp, it turns out, is more than just one week: it’s the energy from that week that keeps my musical engines running through the other 51 weeks of the year.

By the time Jazz Camp West 2010 rolled around, I was starving for creative immersion, and I haven’t missed a week since.

I now make creative immersion experiences a regular part of my year. Many years I’ve had to apply for a scholarship to get to Jazz Camp West, but I’ve managed to get myself there. I’ve gotten very clear that getting myself to Jazz Camp, getting myself to the FOC retreat, are priorities, and I do what I need to in order to make them happen.

It’s all a matter of priorities

A week of jazz music in the woods may not be a priority for you, but as they say, one person’s junk is another person’s treasure. The key is to figure out what your treasure is, and guard it with your life — and pocketbook.

The other key is to make sure that truly feeding and nourishing your Self becomes top of your priority list. That includes your Creative Self, because a well-nourished Creative Self = a life worth living. (Click to tweet this!)

What might you create, if you let yourself afford it?

Speaking of prioritizing YOU… 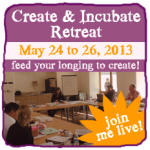 My first Living A Creative Life Create & Incubate Retreat is coming up May 24-26, and it may be just the thing to charge up your creative engines to keep you humming through the rest of the year. Early bird pricing is good through Thursday, January 10 only, so don’t delay — click here to read all about it and snag your spot now (only 8 left at the time of this writing…)