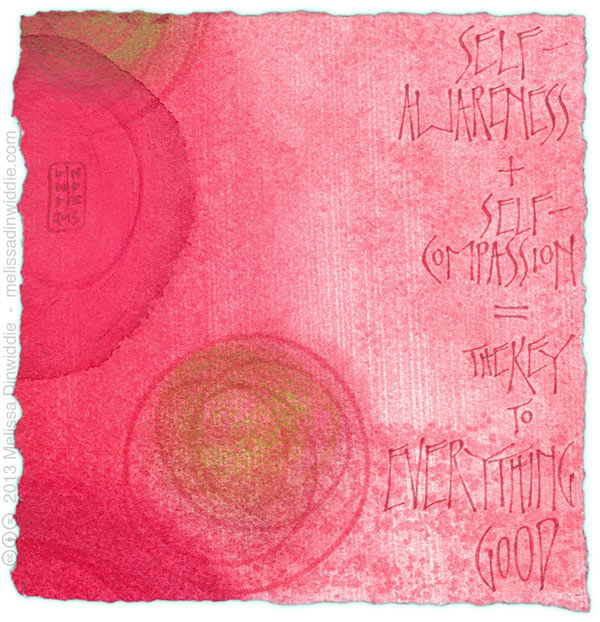 Of the two of us, MB is definitely the one with the more “even keel.” Compared to him, my moods are rather like a roller-coaster: high highs, low lows, and a lot of swerving in between.

That said, I’m rarely what I would call depressed.

I might feel down for a short time, but the life-sucks-and-I-don’t-want-to-do-anything-but-read-novels-in-bed-and-the-idea-of-dealing-with-existing-utterly-exhausts-me-and-I’d-like-to-just-disappear kind of depression thankfully doesn’t happen very often.

So I was rather surprised when I felt just that the other day.

My mood had been on a bit of a down trend for a few days, and then I woke up and felt, well, pretty miserable. The temptation was very strong to wallow in the feeling, pull the covers over my head, and shut out the world. But I resisted that temptation.

Instead, I got mindful.

Instead of being driven by my depressed feelings, I took a metaphorical step back, and noticed them.

“Hunh,” thought I, “I notice feelings of depression. How fascinating.”

I acknowledged that this kind of feeling was rare for me, and wondered what might be causing it. When I remembered that my period was drawing nigh, I had an explanation that made sense. I don’t normally exhibit PMS symptoms, but very occasionally I have noticed an unusually down mood before my period.

Having an explanation didn’t change my emotional state — I still felt lousy — but it lifted some of the fear that had been creeping in, that I might (egad) get stuck this way.

The biggest thing this mindfulness approach did, though, was to create a separation between me and my emotional state.

Instead of just sitting in the depression, a part of me was able to step outside of it and just notice it. I still felt depressed, but mindfulness gave me some breathing room and a chance to choose my response to the feeling, rather than just sinking into it.

One possible response — and definitely the most appealing one at the moment — was to just spend the day in bed. But in the space opened up by mindfulness, I was able to instead ask myself if that was what I really wanted to do. Would spending the day in bed, reading novels and sleeping, make me feel better or happier at the end of the day?

Unlikely. What makes me happiest (as someone with Achiever as my #2 Strengthsfinder strength) is a sense of accomplishment. So spending the day in bed would have a much higher chance of making me feel more depressed, rather than less, at the end of the day.

So I drew up a list of all the stuff I really wanted to get done, and I asked myself which were the THREE things on that list that I’d feel most pleased to have checked off by the time I went to bed, and most annoyed to have NOT checked off.

Then I pulled myself out of bed, still depressed, and got on with tackling those three things.

Was I magically un-depressed at the end of the day? No, I still felt pretty lousy. But I also had a sense of accomplishment, despite the depression. And I was able to see that the feeling was very likely transitory. It did not define me.

This is the “magic” of self-awareness.

The Universe acts in mysterious ways. The day that I started to write about this experience, I happened to tune into my local radio station right when they were airing a live interview from months back with Jon Kabat-Zinn, the originator of Mindfulness-Based Stress Reduction, or MBSR.

He was being interviewed by Kelly McGonigal, author of The Willpower Instinct, and teacher of The Science of Willpower, a Stanford Continuing Studies course which I’m enrolled in right now.

And it just so happens that I’m running a Willpower Instinct reading circle inside the Creative Ignition Club, starting on Thursday! (There’s still time to join in.)

I’ve never studied MBSR, I’d never even heard of it, but I resonated with Kabat-Zinn immediately. What he and McGonigal were discussing was exactly what I had been practicing the day before, when I was so depressed!

We don’t reduce stress (or depression, or any emotional state) by resisting it, or trying to stuff it away, but rather by noticing it and allowing it to be.

Mindfulness, it turns out, is also a powerful willpower booster. When we can act mindfully, we’re less likely to be driven by unconscious impulse.

The impulses don’t go away (I still want a cookie, I still want to lie in bed instead of getting up and getting on with my task list, I still feel depressed, etc.), but we’re better able to access that part of our brain that is in charge of getting us to do the “harder thing,” the thing we really want in the long run.

Hence my ability to get out of bed, even on a highly depressed day, and get stuff done.

The first piece of homework McGonigal gave us in The Science of Willpower class was to meditate five minutes a day* — one of the best ways on the planet to not only practice mindfulness, but to strengthen your willpower throughout the rest of your day.

(Given that I’ve been meditating daily since last April, ten to fifteen minutes every morning, my homework was kind of a breeze. :))

I can only wonder if I’d have been able to respond with such self-awareness to waking up depressed a year ago, before I started meditating.

Of course I’ll never know, but what I do know is that the lessons I’ve learned from The Willpower Instinct have proven hugely helpful. I’m excited to be going over this material again, little by little, over a period of several weeks, both in class with McGonigal, and in my reading circle inside the Creative Ignition Club. The book was a quick read, but there’s just too much good stuff to absorb in a weekend!

I’ll let you know how it goes.

*That, or get regular, consistent (read: more) sleep. Also a powerful willpower booster.

NOTE: This post is in no way intended to give the message that mindfulness is a cure-all for clinical depression! I was not clinically depressed, and I’m certainly not a medical professional. Simply sharing my own experience.

Want to learn tools for making it easier to leap past distractions and get to your creative thing? Join the Creative Ignition Club and you can be part of our Willpower Instinct reading circle. Click here for all the details. The cart closes after Wednesday, FYI, so if you want to join in, now’s the time.