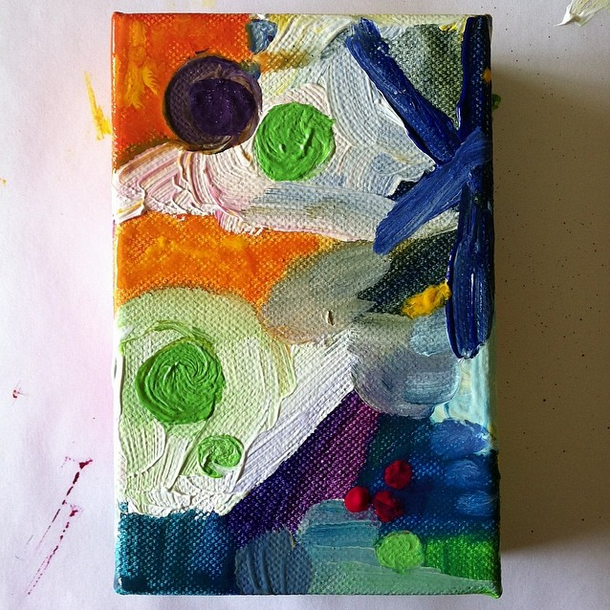 I think the biggest gift of this year’s Create & Incubate Retreat (aside from the priceless connections and community), was coming back to my painting practice, which I’d allowed to lapse while I focused on clutterbusting my studio and rejuvenating my writing practice.

(Being a passion pluralite is hard sometimes!)

At the retreat I had the luxury of painting for hours each day. Now that I’m home, I do not have that luxury, and it’s all-too easy to slip back into not painting at all…

I have to pick and choose.

Even so, even though I can honestly say I’m doing my creative thing even on days when I’m not painting, the truth is, I really want painting to be a regular part of my life.

I get to change my mind about that anytime, but right now, I want to be making art in my Creative Sandbox, and doing so regularly. I want painting to occupy one of the burners on my passion pluralite stovetop.

The retreat helped me remember how important painting is to me, and how good it makes me feel!

So today I decided to dedicate at least 15 minutes of my daily morning work sessions to PAINTING! This morning I “made a mess in the Creative Sandbox” with the 4×6 work-in-progress shown above, and it felt GREAT!

Alas, this means less writing time, but that’s the hard reality of life: we have to pick and choose.

And again, I get to change my mind anytime. 🙂

I feel the weight of my choices every day. Back in October I committed to a crazy, year-long project, 3x5x365, in which I fill a 3×5 card to a one-word prompt every day, post the pic here, and send it out in a newsletter.

And I could quit. I have the right to change my mind. But I’m sticking with it for two reasons:

1) I want to experience following through on a challenge for a full year. Sure, I have feelings about it now, but those feelings have ebbed and flowed. I have no way of knowing what it feels like to stick with something like this for a year until I’ve done it. So I’ll do it.

2) The feedback I’ve gotten from a handful of people for whom my efforts are meaningful. Not many people email me about 3x5x365, but the few who have really inspire me to keep going. When you know you’re making a difference, it motivates you to stick with it.

Yesterday Cory and I interviewed Jolie Guillebeau for the Creative Insurgents Podcast (watch for that episode to air in August, or better yet, subscribe in iTunes [and be sure to leave a review!]). I was so inspired by her story, and by the 100-day painting challenges she set for herself.

With an initial mailing list of only 40-some-odd friends and family, Jolie started emailing a pic of a new painting every day for 100 days. The painting on day 1 was priced at just $1; day 2 was $2; day 3 was $3, etc.

When she finished with this original 100-day challenge, she set herself another one, this time pricing the paintings at “Name Your Own Price.” And when that challenge was done, she took on another one — each challenge carefully designed to shatter a particular self-installed glass ceiling. This ongoing experiment, quite brilliantly, also helped her learn how to price her work.

In the four+ years since she started, Jolie has painted over 2,000 paintings, and is now earning a sustainable income as an artist.

Part of me really wants to take a page from Jolie’s book.

Back in 2011/2012 I had an almost-daily painting newsletter, my not-quite-daily ArtSpark, and part of me is tempted to bring it back from its hiatus. I’m tempted to take on new creative challenges, and to try crazy selling experiments, like Jolie’s.

And I also know that adding one more thing to my already very-full plate is not in alignment with my other goal of excellent self-care and self-compassion.

So I will mull and process, and perhaps when Project 3x5x365 is done I’ll take on a different (shorter!) challenge.

And for some behind-the-scenes views of last weekend’s retreat, click here. 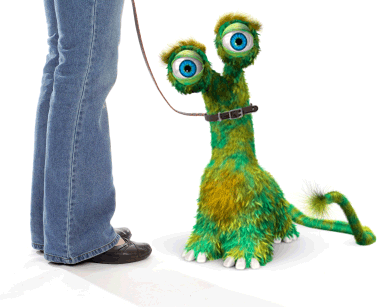 Recently, a coachsulting client came to me struggling with guilt feelings.

Several weeks before, she had landed on a brilliant idea for a creative business, making beautiful, meaningful objects that excited and inspired her. She loved the idea of creating a business from her creative thing, and she was thrilled with the notion that what she was creating could inspire other people, bring beauty and meaning to their lives, maybe even help them accept themselves just as they are.

The very act of creating, and sharing her creations with the world, could make an impact, and for this generous soul, nothing could be better.

Except that now she wasn’t so sure she wanted to go forward with this idea.

As she had moved forward with her idea, she found herself less and less compelled by the creations she had planned to create, and more and more compelled by totally different creations, that had nothing to do with this grand business idea.

Was she copping out, she wondered? Should she force herself to keep trudging forward with this idea, which had seemed so perfect a few months back, but now left her feeling uninspired?

A voice inside her said “Yes, absolutely, you must keep going! You said you were going to do this! It doesn’t matter if you’ve lost interest! You’re a quitter if you stop now! Don’t be a flake!”

Which voice was the Voice of Truth?

Here’s the thing: sometimes the voice that tells you to quit is the Inner Critic Gremlin, disguising itself as the Voice of Truth in an attempt to keep you safely in your comfort zone.

If your reasons for quitting are fear-based, or a feeling that you’re just not ready yet, you can bet it’s the Inner Critic Gremlin.

But if you want to quit because something else is pulling you more powerfully, don’t be too quick to label yourself a flake.

In Refuse to Choose, Barbara Sher’s wonderful book for Passion Pluralites (she calls us Scanners), Sher compares those of us with a multitude of interests and passions to the humble honeybee.

The honeybee flies from flower to flower, collecting pollen. It doesn’t stay on one flower for its whole life — as soon as it gets what it needs from a particular flower, it flies off to the next one. It’s what honeybees do.

When you’re compelled by multiple passions or project ideas, you’re like a honeybee. As long as you’re stopping because you got what you needed, you’re not being a flake, you’re being true to your wonderful Passion Pluralite nature.

The notion that you have to stick with a project forever just because you were super-excited about it at one time is a lie that your Inner Critic Gremlin loves to tell.

Another lie that our gremlins absolutely love is the idea that you have to act on every single idea you have.

Very, very few of these ideas did he actually go on to create.

Do we look down on Leonardo as a flake? No, we do not! We canonize him as a genius.

You, dear creative, have your own, unique kind of genius, made up of your unique worldview, your unique ideas, your unique perspective. Enjoy it! Let your ideas bubble and flow. Capture them in your own notebooks (in Refuse to Choose, Sher prescribes keeping a Scanner Daybook, to do just that), and revel in them.

You do not have to build all of your ideas out in the real world!

If there’s a voice telling you that you do, guess what, that’s the Inner Critic Gremlin, too.

Bring that Gremlin voice to heel

After several questions from me, my coachsulting client realized that the voice telling her she must keep working on her business idea was not the Voice of Truth, but the Inner Critic Gremlin. It was the voice that wanted her to work on something “conventional” that would gain family approval — callings of the heart be damned!

Once she saw whose voice was telling her not to quit, she was ready to leave her business idea aside, to liberate her creative energy to flow where it most wants to go right now. She may choose to go back to her idea at some point, or she may not. Regardless, it had served a useful purpose already, by getting her excited and getting her creating!

Thank goodness for gremlin-training techniques! Without an ability to recognize the Inner Critic Gremlin voice, our heroine might have been stuck in the rut of her original idea forever.

Gremlins are sneaky. They come out in all kinds of ways. Sometimes it’s the more-easily recognizable voice of “You suck! You’ll never be good enough!” Sometimes it’s something more subtle, like “You can’t quit! You’ll be a flake if you quit!”

Thankfully, there are tools for learning to recognize your gremlin when it shows up. I’ll be sharing my repertoire of gremlin-training techniques at my upcoming Gremlin Training Lab on Wednesday, September 19. Click here for more info and to join me!