For three and a half hours solid.

I was leading Rosh Hashanah services, something I’ve done for so many years now I’ve lost track.

As I stood behind the podium, I marveled at how much fun I was having, and how comfortable I am on the bima (stage), taking a leadership role in front of a large group. (I’ve been told that visitors to our congregation often assume I’m a rabbi or a cantor — in other words, a professional.)

You’d think I was born good at this.

Well, ha. Nothing could be further from the truth!

The truth is, although leading Rosh Hashanah morning services (and Yom Kippur morning services, which I’ll be leading tomorrow) feels totally natural to me now, and one of my favorite things to do is perform for an audience (though usually it’s singing jazz with a trio, or singing my original songs with my ukulele), it did not start out that way.

Before my synagogue started holding our own High Holy Days services, back in 1996, for a few years I went to services at Stanford Hillel. I remember sitting in the congregation inside Memorial Auditorium in 1995, enthralled by the gorgeous voice and elegant poise of the young woman student up on stage who assisted the rabbi as a lay cantor.

How I wished it was me up there! But that seemed… well.. impossible, really. Just a fantasy.

Then I was recruited to join the board of my synagogue (I was still in my 20s at that point, and no doubt they were thrilled to have someone that young and energetic to recruit!) And when it became obvious that I could carry a tune (though I certainly didn’t think of myself as a Singer!), when we held our own High Holy Days services the following year, I was recruited to help lead the rounds.

I remember shaking in my shoes when the time came to get up onstage. My mouth felt as dry as Death Valley, and all breath had seemingly left my body.

It’s amazing I could be heard at all. Even with a microphone!

But I made it through… and was recruited to lead one of the services the following year, in addition to helping with the rounds.

What? Me lead a service? No way! I’m not ready!

“Yes you are,” came the response.

And you know what? Although I wasn’t ready when they recruited me, I got recordings of all the prayers and songs I needed to learn, practiced like mad, and by the time the next High Holy Days rolled around, I was ready.

And I was nervous as hell.

But I made it through.

And a few years later I was recruited to take on a bigger leadership role, leading the entire morning service on Rosh Hashanah. And again, though I wasn’t ready at the moment I was recruited, I got recordings of all the additional prayers and songs I needed to learn, practiced like mad, and by the time the next High Holy Days rolled around, I was ready.

And I was nervous… but a lot less nervous.

Meanwhile, in 2002 I went to my first music camp, Puget Sound Guitar Workshop. When I found out on the first day of camp that there was a student concert in a few days, for which everyone was encouraged to front an act, I almost had a panic attack!

No way! I’m not ready! I thought. But I also really wanted to do it…

So I recruited two other women to join me in singing one of the rounds we do during High Holy Days services. And I was nervous, but I made it through.

(And people told me later that you could hear a pin drop in the building when we were singing — everyone stopped talking, even in the dining hall next door.)

I went to camp again the following year, and this time my goal for the student concert was to play my guitar and sing at the same time. I recruited a band to back me while I sang Could You Love Me One More Time.

And my hands were shaking so much from the adrenaline, I barely managed to eke out a single chord. But I made it through. And it was fun.

And meanwhile, the years passed, and I started taking singing lessons, and classes in jazz singing. And I started going to open mikes. And I started performing. And little by little, I felt more comfortable, and less nervous.

That’s how it works. That’s the secret: if you want to stop being scared of doing something, you’ve got to do it.

As a friend of mine used to say, “If you do something often enough, it becomes normal.”

Leading services has become so normal, that now I simply look forward to it every year. That stage now feels like home to me. And every year I think of that young student at Stanford Hillel whom I envied so much, and I smile when I realize that I have become my own version of her.

So if there’s something you’re secretly (or not-so secretly) wishing you could do, but you don’t feel ready, don’t feel like you could ever do such a big, bold thing, I hope you’ll remember my story and just start moving toward it.

Who knows, you might turn around one day and find yourself living your fantasy.

Then you can write me an email and thank me.

May you and yours be inscribed and sealed in the Book of Life for a good year.

One of the great things about being Jewish is that we get not just one, but two New Years.

Last night (Sunday) was the start of the Jewish New Year, Rosh Hashanah.

I’m not a “religious” sort myself, though I do happen to help lead my synagogue’s High Holy Days services (what can I say, one’s relationship to religion is a complicated thing). That’s what I was doing for almost four full hours this morning.

You might think a four-hour service was a drag, but I love leading services! In fact, there was a brief period in my late 20s (right after realizing that Judaism and Feminism didn’t have to be mutually exclusive) when I toyed with the idea of becoming a rabbi.

In the end, being an artist (and ultimately a creator in many expressive realms — a Passion Pluralite) was a better fit for me. Still, thanks to my mostly lay-led synagogue, I get to do rabbi-like stuff, without having to actually be a rabbi.

Or as I sometimes joke, “I’m not a real rabbi, I just play one on TV.”

I’d be lying if I said my ego wasn’t involved here. I love being in the spotlight. I love singing for an appreciative audience. I love speaking in public. I love improvising.

People who come to our services for the first time usually assume I’m a rabbi. Or a cantor. Which isn’t surprising — after all, I’m up there on the bima, doing stuff that one associates with rabbis and cantors. And I am awfully comfortable up there. There was a lot of improvising this morning, as my co-leader and I hadn’t planned out exactly who was going to saw what, when, and we had to wing it several times.

But that was fun for me! This morning was a treat. A total blast. If you had been there, you might have thought I was born doing this.

First of all, I never even set foot in a synagogue until college (well, except for one time, around age 10, when I attended the bar mitzvah of a friend of my brother’s). When I first started going to services I had no idea what was going on, but because I’m Jewish, I kinda felt like I should know what was going on.

It was very confusing, and not a little stressful.

I was also far from being comfortable on stage!

It’s true I had a modicum of performance experience, in a handful of childhood recitals, in youth choirs and orchestras, in a couple of college musicals, and as a dancer. But leading a service?? That was an entirely different animal! That required a whole set of skills and a bunch of knowledge that I certainly didn’t have!

I remember, before my synagogue started holding our own High Holy Days services, attending Rosh Hashanah services on the Stanford campus. The rabbi was aided on stage by a very confident student, with a gorgeous voice.

How I envied her poise and confidence! How I wished I could do such a thing — stand comfortably on stage in front of a large crowd of people, and bring them together through the power and beauty of my voice and bearing!

That’s certainly what my Inner Critic Gremlin told me! “You could never do that,” it said.

Little did I know that a handful of years down the road I’d be doing exactly that!

Inner Critic Gremlins are notorious for being wrong. Which is why it’s so important to learn to manage them! If I’d listened to my gremlin, there’s no way I’d be leading services today. (Join me at my Gremlin Training Lab on Wednesday and I’ll teach you my secret “gremlin-whispering” techniques.)

How did this happen? How did I go from dreaming longingly about something that seemed utterly impossible, to mornings like today, when people actually lined up after the service to thank me for leading?

One baby step at a time, that’s how.

First I learned to lead Shabbat services for a tiny group — generally no more than ten to twenty people. And let me tell you, the first several times I did that I was quaking in my boots! My mouth was full of cotton, my armpits were sweating like crazy, I felt dizzy with nerves!

After awhile, leading Shabbat services became normal, and no longer freaked me out. But when my synagogue decided to host our own High Holy Days services, and I was invited to help lead the many rounds we sing throughout the services, it was dry mouth and stage fright all over again!

All of which requires an ability to wrangle that Inner Critic Gremlin, who lives to keep you well inside your comfort zone.

Nowadays, leading a service for a few hundred people doesn’t even make me flinch… except when (like this morning) I’m expected to sing a whole new set of melodies and songs that I don’t completely know by heart yet. (Ack!)

But even stepping onstage in a state of uncertainty like that is something I’ve gotten more used to. (I’m here to tell you, if you wing it enough times, even winging it becomes less scary!)

All I can say is, Hallelujah for pushing beyond your comfort zone!

And take that, gremlin!

Oh, and Happy New Year! May it be a sweet one, filled with expanding boundaries.

Hey-Ho! You want to read this! 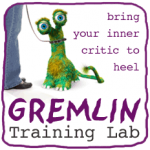